In an effort to undermine the popular assumption that history exams get harder every year, may we present to you our all-encompassing, highly detailed analysis of the complete history of Soho.

It was, in chronological order, a farm; a park; a suburb; and then home to London’s first ever speciality whisky store, Milroy’s.

The same Milroy’s that – after being founded by bothers Jack and Wallace in 1964, appearing in nearly every London travel guide for 10 years thereafter, and subsequently being taken over by two large corporations that ultimately ran it into the ground – is now being brought back to life by a young group of whisky connoisseurs…

… who have decided to make a few changes. Partly upstairs. But mainly downstairs.

Upstairs: Where London’s oldest whisky shop has resided for more than 50 years, they now have… well, a whisky shop. But also a liquor licence; a dedicated copper whisky bar; and over 500 separate whiskies from every lauded spirit-producing nation on earth, including a selection of handpicked, cask-aged tipples from which you can pour your own bottles and make your own whisky blends. You can swing by at any time for a sip, or head in for a guided tasting every Monday evening. 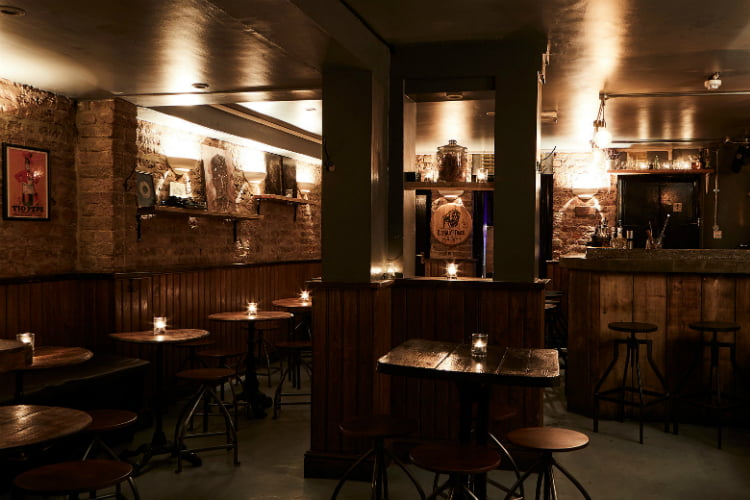 Downstairs:  Accessible through a secret door hidden within a false bookcase at the back of the shop is a brooding, underground, candlelit cocktail bar called The Vault. Softly lit and simply designed with bare brick walls, chesterfield couches and handmade hardwood tables, it’s the ideal spot to go whenever you fancy exchanging the sound of car honks and tourists for the gentle clinking of bartenders mixing innovative cocktails…

NOTE: Milroy’s whisky shop and their secret basement bar, The Vault, are both open Mon-Sat (upstairs from 10am, downstairs from 6pm). You can reserve a table in The Vault right HERE.

ALSO NOTE: They’ve since unveiled a second branch in Spitalfields – check it out.