Now that’s a good place to pop into if you’re in the street and desperate to visit a publicly-accessible bathroom, without the risk of being noticed by either a burly bartender or a McDonald’s security guard.

Unless either of the following are true:

A) You’re concerned by the opinions of others, and so feel obliged to purchase something Starbuckian either en route to, or on the way out of, the bathroom OR

B) There’s a code on the toilet door, meaning you have to purchase something in order to obtain it.

Either way, chances are high that you’ll be buying something you don’t want.

There’s a point to all of this.

And that point is that the current trend of turning ex-public toilets into bars is a huge problem because the fewer public toilets there are in London, the more money you’re going to be spending (unnecessarily) in coffee shops. 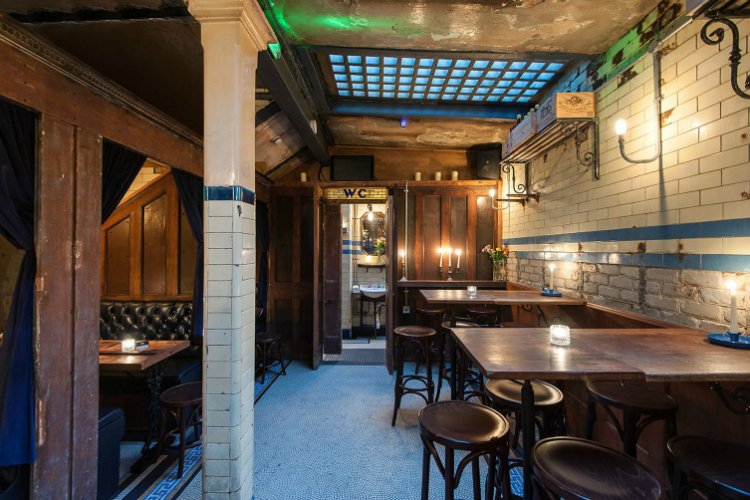 That said, even the nicest public toilets – those, for example, which cost a similar price to enter as a single Starbucks Gold Coin – aren’t as nice as even the shabbiest coffee shop restroom. And so we take all of the above back, and instead wish to officially celebrate the transformation of London’s public restrooms by inviting you to drink wine and dine on mountains of the world’s finest charcuterie in what used to be a public lavatory, located directly below Clapham Common tube station.

Welcome to WC, a place named both in honour of its previous incarnation and by virtue of the fact that it serves Wine and Charcuterie.

The genuinely impressive result of two years’ hard work by two Clapham residents – who have transformed the derelict site from somewhere “not nice” into somewhere “nice” – WC’s mosaic tiling and leather banquettes are complemented by natural light from the streets above, a regularly-changing cocktail list, live music and a bar framed by what used to be the toilet attendant’s office.

The best part?  They have bathrooms, too.

NOTE: WC is open every evening. It’s walk-in only, unless you want to book a booth for groups of 5-8. Find out more on their website HERE.

Partial to a glass of vino? Then our guide to London’s best wine bars might interest you…