In the Black Fantastic’s curator, the writer and broadcaster Ekow Eshun, writes a gripping introduction to this new show at the Hayward Gallery, explaining how the exhibition isn’t linked by any one geographic location or artistic movement, but rather “a way of seeing” shared by the eleven featured artists.

It isn’t, however, the first thing you’re likely to take in.

Because the sight that greets you as you walk into this exhibition is a suspended sculptural curtain made up of dozens of interlinking arms and hands. It’s the astonishing work of Nick Cave (not as in ‘and the Bad Seeds’, but the Illinois-based artist, whose work has only rarely been shown here in the UK). Each link in this vast chainmail is a resin cast of his own forearm, simultaneously clinging to the hand above, and hoisting up the others below. It’s a visually arresting and visceral piece, the life-like blood vessels and muscle tone beneath the surface emanating both power and struggle.

It sets the tone for a show that pulses with energy, from the voguing CGI figure in Rashaad Newsome’s film to Chris Ofili’s sinuous depictions of Greek mythology. The link throughout (as you’ll now discover on returning to Eshun’s introduction), is the artists’ collective engagement with the ‘fantastical’ — whether a sci-fi future, alternate reality or reimagined history — to reframe the Black experience in Western society. 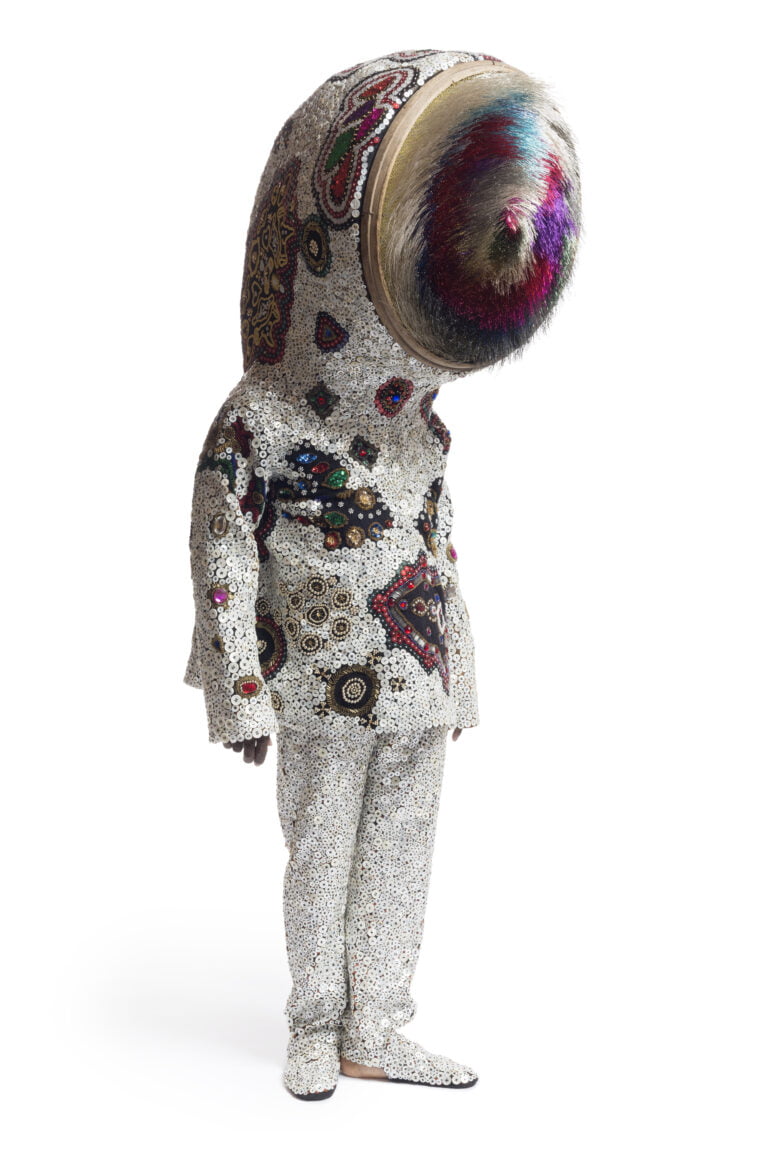 Many are direct, vital reactions to racial violence, epitomised by Kara Walker’s harrowing shadow play. Cave’s other work on display includes some of his Soundsuits series, originally made in response to incidents of police brutality in the ’90s and the artist’s growing sensation of being “devalued, viewed as less than”. In these wearable sculptures that cloak the race, gender and class of the person within, exterior is made interior, and value is displayed, overwhelmingly visibly, in the intricately arranged sequins, buttons and trinkets outside.

The artists featured in the show each occupy their own individual space, but there’s a cohesive narrative running throughout. Forces of nature are tangibly present, particularly in the Kenyan-born artist Wangechi Mutu’s guardian forms; organic sculptures combining found natural objects like bones and shells with wood and papier mâché sculpted sympathetically by the artist to create dynamic figures that seem to grow directly from the earth. Lina Iris Viktor’s quietly powerful portraits, inspired by a Greek prophetess, are set against backdrops of maps and constellations picked out in real 24 karat gold. Then there’s the recurring threat of the apocalypse, explored in Hew Locke’s fascinating, highly-ornamented horsemen, and in Sedrick Chisom’s haunting portraits, set in a future in which people of colour have chosen to leave Earth. Upstairs, Ellen Gallagher’s rippling triptych depicts Drexciya, the mythical Black Atlantis peopled by the descendants of pregnant women thrown overboard during Atlantic crossings.

Conceptually, it’s a hugely refreshing show and there’s such a variety in style and approach here that there’s something to capture everyone’s attention on a purely aesthetic level, too. This fabled exhibition has been reeling in 5* reviews for a reason: don’t miss it.

NOTE: In The Black Fantastic runs at the Hayward Gallery until 18th September (closed Mon & Tues). Tickets cost £13.50, and you can book HERE.

Love art? Check out the best exhibitions on in London right now

Got A Tip? Email Editor[email protected]