The Andaz Hotel on Liverpool Street is home to one of the most unexpected and intriguing hidden spaces in London: a century-old, marble-clad temple used for ancient masonic rites.

Luckily, you don’t need a compass to find it.

Today, nestled amongst conference rooms and luxury suites, it lies completely unchanged in the heart of the hotel. And to understand precisely what the clandestine chambers of a secret society are doing in the middle of a hotel, we need to go back to the building’s origins in the 1880s… (cue harp music and wavy lines). 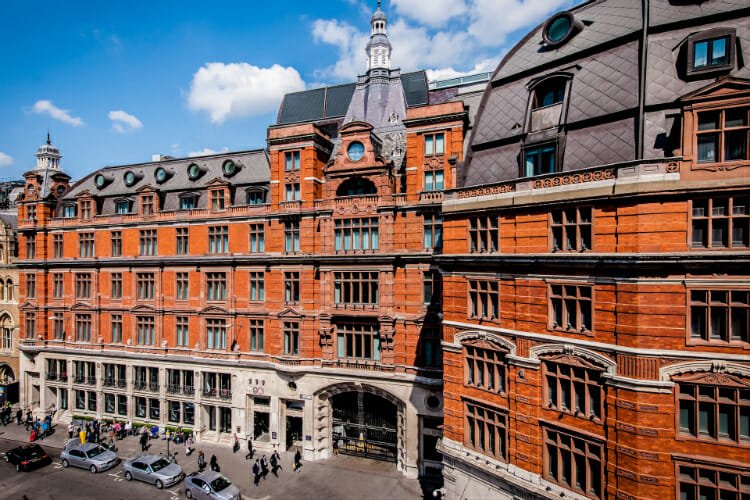 At the tail end of the 19th century, railway companies were making huge profits as trains became the most popular way to get in and out of the city. Keen to demonstrate this prowess, and to make the most of the weary travellers passing through their stations, many rail operators opened grand hotels next door – like the imposing, gothic-styled hotel still standing next to St. Pancras, originally built by the Midland Railway Company.

Liverpool Street Station was operated by the Great Eastern Railway, and in 1884 they unveiled the Great Eastern Hotel right next door, designed by Charles Barry Junior and Edward Middleton Barry (whose father built the Houses of Parliament). Standing on the site of the old Bedlam asylum, it was a grand affair,  boasting its own dedicated railway next door that brought fresh seawater in daily for the guests’ baths. And despite having only 12 bathrooms to serve the 160 bedrooms… they did manage to squeeze in two masonic temples. 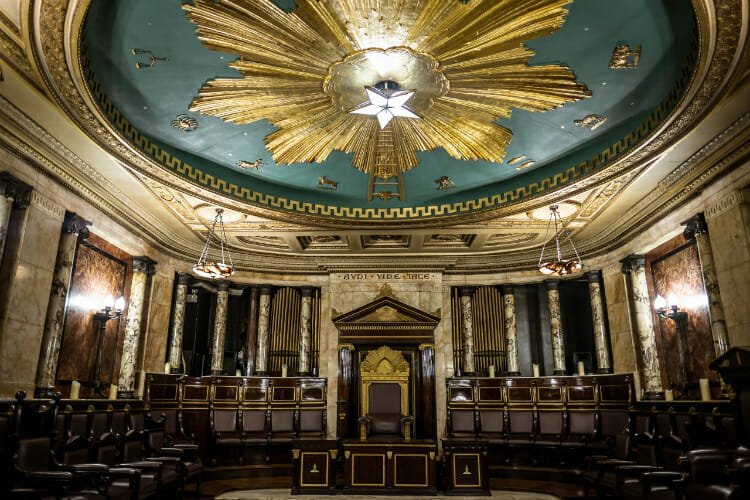 Given that pretty much anyone who did anything important in those days was a mason, this isn’t as completely bizarre as it might sound. With influential businessmen, officials and professionals passing through that hotel every day, a masonic meeting point was probably as key a luxury hotel amenity as a spa would be today.

In 1912, the chairman of the Great Eastern Railway (coincidentally a mason) decided to pull out all the stops and redesigned the first floor temple in a Grecian style, while the temple in the basement was Egyptian-styled. He commissioned the architect Alexander Burnett Brown (also a mason) to build it, at a cost of around £4 million in today’s money. At the time, it was widely regarded as one of the finest meeting chambers in Britain – chaired by HRH the Duke of Connaught, no less – and it was used regularly by Caledonian Lodge members until 1947. There’s a romantic urban myth that the lodge then lay forgotten for years and was rediscovered behind a false wall during renovations in the late 90s… but masonic records show the Barbican chapter had used the room for meetings as recently as 1992.

Either way, it still makes for a spine-tinglingly atmospheric visit today. 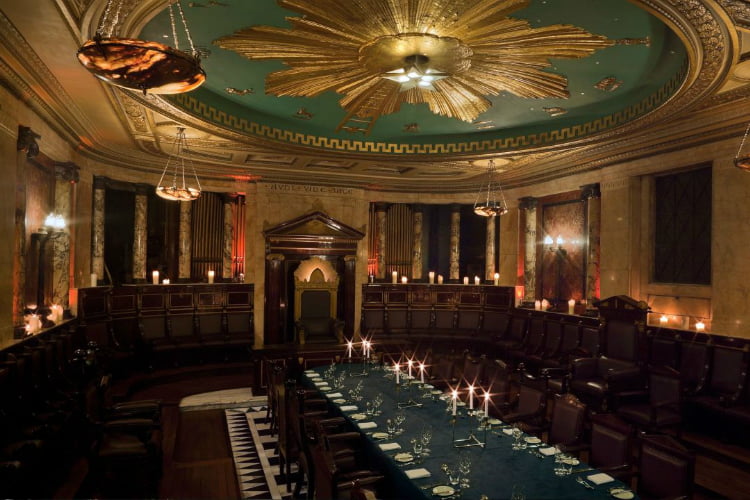 Push through a pair of heavy doors bearing brass lion knockers, pad through the wood-panelled antechamber, and you’ll find yourself in a perfectly preserved, ornately decorated room covered with arcane symbols and carvings.

Lined with stone pillars, the room contains twelve types of Italian marble and wall-to-wall mahogany benches. The room’s bookended by two heavy-looking thrones, one below the Latin inscription Audi, vide, tace (listen, see and be silent), and surrounded by the pipes of the temple’s own organ. Bronze candelabras with clawed feet cast a dim, shadowy light onto the sunken floor, known as the Masonic pavement. Made of chequered marble, you’ll find curious stone tassels at each corner, representing the four cardinal virtues of temperance, prudence, justice and fortitude.

Crane your neck up towards the beautiful turquoise and gold ceiling, and you’ll see a gilded sunburst surrounded by the twelve signs of the zodiac. Look closely, and you can see a ladder ascending into the blazing star at its centre, with more ciphers etched onto the rungs – symbolic of a mason’s spiritual and intellectual journey towards enlightenment.

The good news is that you can still take a peek at this mysterious room without having to wait for a secret handshake. You can take a look around on London’s Open House weekend every September, and the hotel still opens those heavy studded doors for events now and again. Currently, they’re hosting a series of atmospheric screenings, with cocktails and cult horror films by candlelight…

And as for the hotel’s subterranean Egyptian temple?

NOTE: Andaz London’s Temple Cinema screenings take place once a month – you can see what’s coming up, and book tickets (from £15-35), HERE. The Temple is also usually open for visits on Open House Weekend – keep an eye on their website HERE. Finally, you can also hire the temple for private dining – find out more HERE.

Like spooky time-warps? Head to Dennis Severs’ House round the corner…