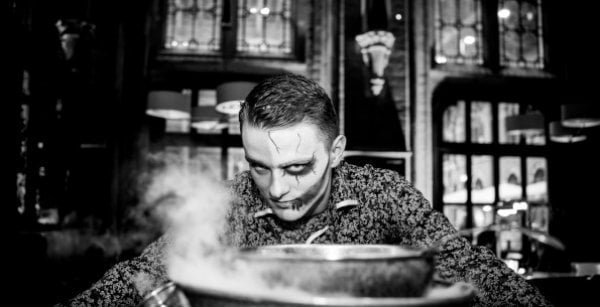 Halloween isn’t something you can opt out of: it’s coming for you, even if you stay at home…

Which is why your best option is to go out.

And our top choices for where you should go are – drumroll, please – the following:

In a combined celebration of the Rocky Horror Picture Shows 40th anniversary and All Hallows Eve, West End Film Club are throwing two highly antici-p-p-pated RHPS screenings at Century Club, followed by a party on the rooftop to round out Halloween.

So much better than staying in with your old videotape version.

Which time has probably warped anyway.

Behold a paragraph devoid of charm, wit or humour which makes up for its deficiencies by being 100% factually correct:

Starting on Halloween and running for eight consecutive nights thereafter, Backyard Cinema Club are throwing a ghoulish collection of interactive horror movie marathons; where after navigating zombie infested quarantine stations you can perch up in the ‘survival zone’ for street food offerings, creepy cocktails and an ‘End of the World’ after party.

A real-world game of speed, stealth and strategy in which you have 80 minutes to reach as many checkpoints as possible.

Only, the checkpoints are guarded by ‘zombies’, ‘ghouls’, ‘evil clowns’ and ‘banshees’, and so require you to plot, sneak, crack clues and work with sabotage other teams in what is essentially a giant Shoreditch-wide game of Capture The Flag.

Running a bingo night is more than just a job.

Fortunately, Indeedy Inc. know it’s theirs, and so are back with a spooktacular night of Macabre musical bingo, where table dancing, inflatable bananas, creepy cocktails, prizes and 2am moonlight dancing are a match ‘made in heaven’ – ‘67’.

Never take a blind date to a silent film.

Considering that you have both obviously never met, and considering it’s a date, you’d be much better off cuddling up to one of Pop-Up Screens’ Halloween Fright Fest interactive movie nights, complete with hot chocolate, pop corn and a selection of sweet treats.

Jesus has been rocking ‘the zombie’ for 2014 years.

So ‘zombie-trendy’ in fact, that he may even show his face at Bounce Holborn, who as it happens are throwing an underground zombie apocalypse UV bunker party AND offering free ping pong from 11pm, UV face painters, floor cruising Games Gurus, and DJ Pete Pong’s Classic Halloween anthems until 3am.

Remember all those Brothers Grimm folktales of your childhood?

We have an Eskimo fetish, but sadly most people aren’t that Inuit.

Speaking of fetiches, Bourne & Hollingsworth have one for Halloween, and so have fittingly teamed up with Torture Garden (Europe’s largest fetish club) for one night of spine chilling sensory stimulation, cocktails and Circus Burlesque.

Things could get weird.

The House of Mask Halloween Special

Behold: a party that absolutely no one knows anything completely factual about.

Except that it’s in a secret East London location marked only by a neon skull, will probably serve Cubanisto rum-flavoured beer, and likely incorporates interactive theatre, street food, live art and an illustrious DJ headline act.

It was a good decision.

Imagine getting your mug shot taken in an LAPD line-up photo and relaxing on the casting couch next to Marilyn Monroe and the Bride of Frankenstein.

Imagine listening to chap hop MC Professor Elemental and New Orleans jazz band The Volcanoes while aerial acrobats dive and twist overhead until the late hours of the morning.

Some things were just made for each other. Like you, your friends, and watching classic halloween inspired movies like Lost Boys, The Rocky Horror Picture Show, Shaun of the Dead and Beetle Juice in steaming hot-tubs at the former Shoreditch Underground station.

In the late nineteenth century, London’s graveyards were overcrowded and bodies were beginning to pile up. The Vaults – 30,000 square feet of abandoned, underground Victorian brick office space –were used as a grizzly morgue facility for London’s rotting corpses.

Perfect place for a giant party, then.

So for three nights, The Halloween Raveyard at The Vaults will house guided dissection labs, cabaret and cocktails, live music, coffin testing and a zombie disco dance hall.

Miss Cakehead’s decided to bake for you,

The Hoxton Hotel is this years ven-ue.

She’ll be making cakes that are oh so obscene,

Especially for you, this halloween.

So go along, and see the… Ok, poems are hard.

The end is nigh.

Literally. Because London’s underground festival deities Winterwell are throwing their last ever event. To see out the eight-year reign, they’ve decided to invite back all the very best artists (including the undisclosed headliner), and encourage the superlative dress up themes of years gone by, except ‘dead’.

Satans Rout: a large evening party or reception complete with musical, trapeze and cabaret performers; a sketching salon by Art Macabre; a coffin testing station complete with professional mourners and most importantly, a drinking hole paying homage to Robert Rodriguez and Quentin Tarantino’s ‘Titty Bar’ in ‘From Dusk Till Dawn’.

The Bethnal Green Working Men’s Club haven’t got one good thing planned for their Haunted House party this Halloween.

3) Disco DJs and guilty pleasure ‘90s tunes over three seperate dancefloors. Which means someone’s probably playing Thriller, and you can do the Monster Mash.

Who Ya Gonna Call?

Katy, Tom and Jon from Superfan Theater bring ‘Who Ya Gonna Call?’, their Edinburgh Fringe Festival sell-out ‘Ghostbusters’ tribute, to The Albany this Halloween. Following the hour-long performance adaptation, there will be a screening of the original film itself, popcorn and cocktails.