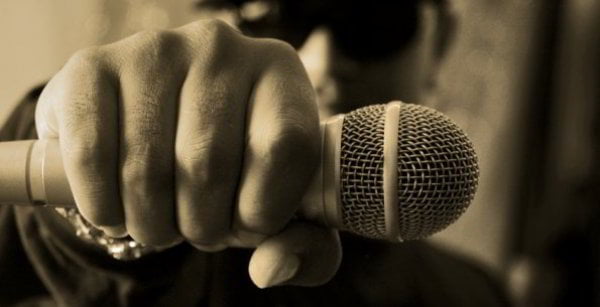 Sometimes you like to mix things up, because you can.

This is one of those times.

Unlike B-Rabbit from 2001’s “8 Mile”, you’re not from the wrong side of the tracks, you don’t live in your alcoholic mum’s trailer and you’re (hopefully) unlikely to have just been mugged by gang rivals.

Despite all of this you are – very, very deep down – as dope a rapper as B.

And while you could take this secret talent along to festivals like Lovebox and Wilderness, you’re probably better off getting some practice in first (which you don’t need, of course). So it’s handy that Hip Hop Karaoke also run nights every Thursday at Shoreditch bar, Queen of Hoxton.

You’ll get there early doors to put your name on the list, leaving you with time to enjoy/neck some Dutch courage, or survey the view from their themed rooftop bar, before popping downstairs to spit bullets on the mic. There’s a live DJ and over 200 songs to pick from, from Coolio to Drake, and an adoring crowd ready to catch the mic when you drop it. And while the professionals probably have nothing on you, there’s also a late-night after party with hip hop and R&B DJs.

NOTE: Hip Hop Karaoke takes place at Queen of Hoxton every Thursday evening. You can find out more, and pre-book, HERE.

Got pipes? Check out the best Karaoke Bars in London