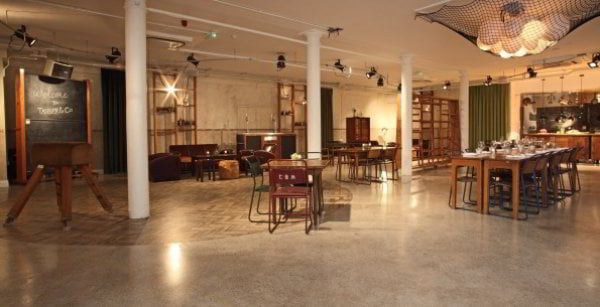 In response to the current heat wave, the Met Office recently published a few guidelines on staying cool:

As useful as their advice was, however, the temperature’s now dropped, clouds have filled the sky and the UK’s weathermen are fighting in the streets to try and reach a consensus over whether or not the sunshine will ever return.

There’s only one way to handle the confusion.

Come to a party for Nudge readers at Tanner & Co (by London Bridge) next Friday 2nd August where, for £35, you can load up on surf n’ turf; enjoy two hours of unlimited booze at an open bar; have access to the outside terrace (if it’s hot) and enjoy a DJ’d after party ‘til late…

On entering the sprawling, school gym-inspired, nostalgia-inducing Tanner & Co you may first want to head to that open bar: partly because it’ll be a Friday… but mainly because it’ll be an open bar. There you’ll find barmen serving up unlimited Jamaican rum punch, beers and wine until 9pm – which is something you’re likely to appreciate irrespective of the weather.

At the back you’ll spot a large open kitchen, where Tanner & Co’s chefs will be cooking up vast quantities of tournedos steak & king prawns which you’ll be invited to combine with as many sides (chips; homemade ‘slaw; corn on the cob) as you can handle… And then if you’re still hungry in advance of the DJ hitting the decks, which is unlikely, you can grab a bowl and pile it up with your favourite ingredients to ‘build your own’ Eton Mess.

Or you could just head back to that open bar….

They know you there.