After a successful stint collaborating with booze purveyors The Winemakers Club, the time sadly came for Flat Iron to put a cork in their Liverpool Street pop up.

The good news, however, is that they have almost instantly reopened their doors as a solo Flat Iron, adding to a growing family of more than half a dozen other venues across the city.

If you missed the pop up, you’ll find the space a stone’s throw from Liverpool Street, where it introduces itself with a large festoon-lit awning. The main seating area is set almost underground down a small flight of steps; a few slivers of daylight carved out of the wall where it meets the ceiling reinforce the glow from the pendant lights dangling over simple wooden furnishings. On the opposite side of the room, they’ve parked a dozen blackboards showcasing the lesser known cuts that are available each day, like ‘Cornish Denver’ and ‘rib fingers’. 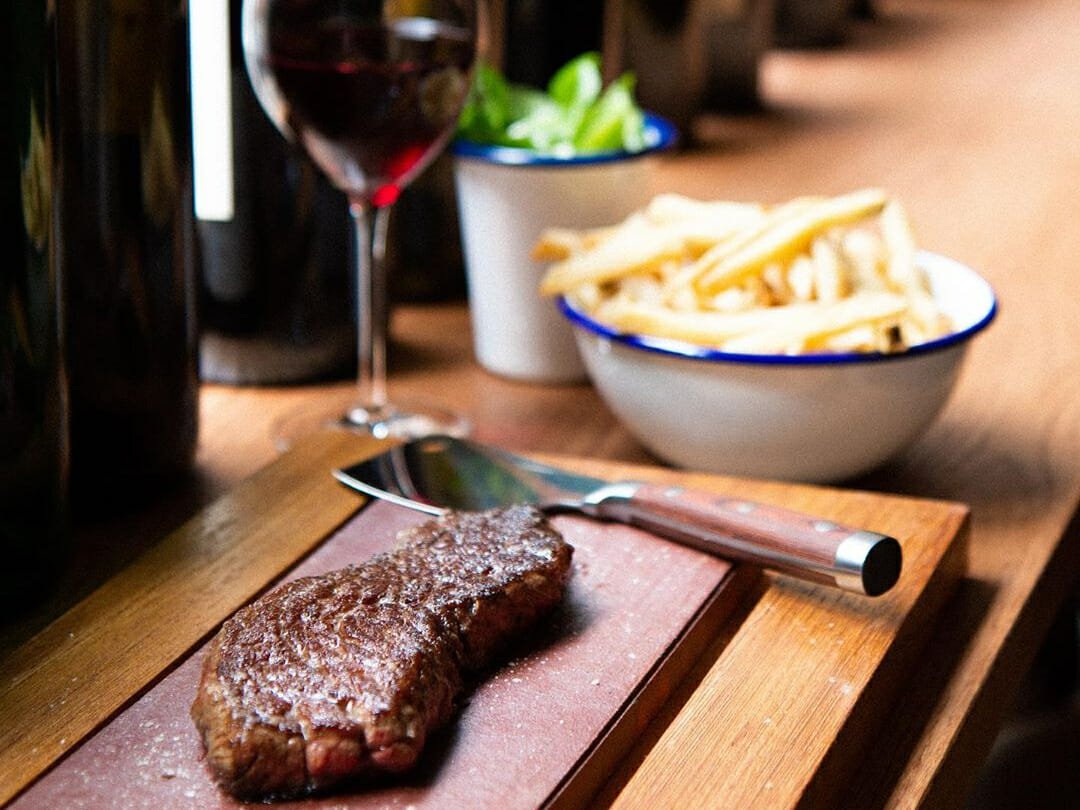 In fact, they’ve expanded their famously slim menu a fair bit (relatively speaking; don’t get excited, vegetarians). It’s still beef-focussed, but you can now get sirloin and rib-eye alongside the signature flat iron steak. And if you want dessert (you do), you’ll be brought a Cru Virunga chocolate mousse with Amarena cherries, served with as much double cream poured over it as you’d like.

Happily, the Winemakers Club are still there in spirit, because their most popular bottles from the pop up are staying on the menu. As with all good wines, they’re available here by the glass, magnum or litre. And of course, there are cocktails (barrel aged negronis, blood orange old fashioned, etc.) and a Flat Iron lager… for those who like to stick to tradition.

NOTE: Flat Iron Liverpool Street is open Monday-Friday, 12-11pm. There are no bookings. You can find out (a bit) more at their website right HERE.

Steak fan? Check out the best steak restaurants in London.