It comes to us from friends Iré Hassan-Odukale and Jeremy Chan, the latter of whom has honed his fine dining skills at places like Dinner, Hibiscus and Noma.

It’s a sleek space, in keeping with the futuristic surroundings of the newly done-up St James’s Market. Inside you’ll find whitewashed walls, mustard banquettes and an intimate 6-seater bar, separated off from the rest of the restaurant and the grand open kitchen at the back by a wall of cascading plants. 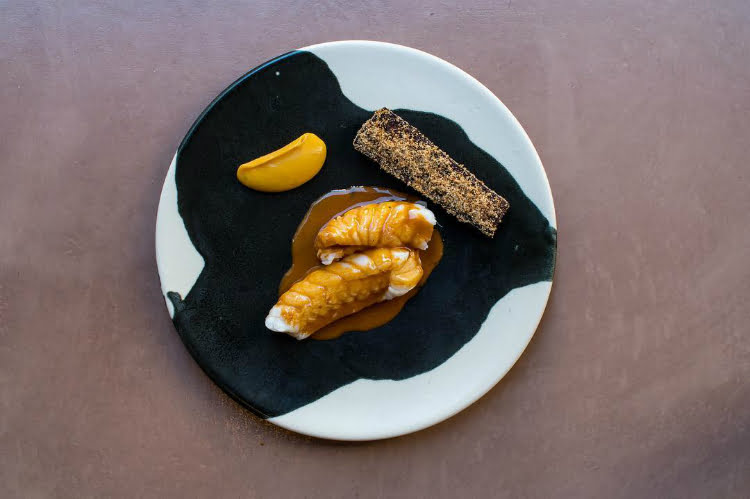 The cuisine here began as an elaborate fusion of West African and British ingredients – a combination so unique on London’s fine dining scene, and so well-executed, that they earnt a Michelin star for their efforts (in just over a year of opening). But in the years since, the menu has morphed beyond geographical borders. The spices of West Africa and seasonal British veg and locally line-caught fish are assembled into blind tasting menus, which might include dishes like squid with Scotch bonnet and fermented rice; smoked jollof rice; ginger caramelised plantain; or yam with caviar and uda (an aromatic, pepper-like spice used in several Igbo dishes).

The wine list, meanwhile, has been put together by the buyer for restaurants like Lyle’s and Gymkhana, while the cocktail menu was designed with brothers Max and Noel Venning (co-owners of the East London bar Three Sheets), and includes drinks like the Cassava Sour, Plantain Old Fashioned, and the Dry Paradise Martini.

NOTE: Ikoyi is open for lunch Thurs-Sat, and dinner Mon-Sat. You can book a table, and find out more, on their website right HERE.

The Team At Brilliant Corners Have Something New Up Their Sleeves It’s going to be just down the road, and you can expect more live music, natural wines, and Japanese food….

Notting Hill's Getting A Music-Heavy, Open Fire Restaurant And the one of the showrunners used to work at The Fat Duck….