A Dazzling, High-Tech Immersive Art Show Is Headed Our Way

The boundaries hemming in great works of art have had their fifteen minutes of frame.

Because we’re now bravely moving into a future of immersive art in which you’re not merely looking at the images, but are enveloped by them.

Or at least, that’s what’s being promised at Frameless. And if they can pull it off in the way they’re hoping, it’ll be pretty amazing. It’s a new art exhibition due to land in central London this October (tickets, however, are available now) which will be housed in 30,000 square feet of space in the new Marble Arch Place complex, making the show “the biggest of its kind in the UK”.

And to be clear, it’s “kind” of show is an immersive one, in which the walls, floors, ceilings, and you are all covered in high definition projections of famous & iconic artworks. They’re promising 479 million pixels delivered by a million lumens of light, as well as a score of classical and contemporary music played over 158 surround-sound speakers. And, to be fair, we’re not sure just what a lot of those figures mean in context. Honestly, they could have said anything, but we’ll go ahead and assume that it’s all probably quite impressive to experience. 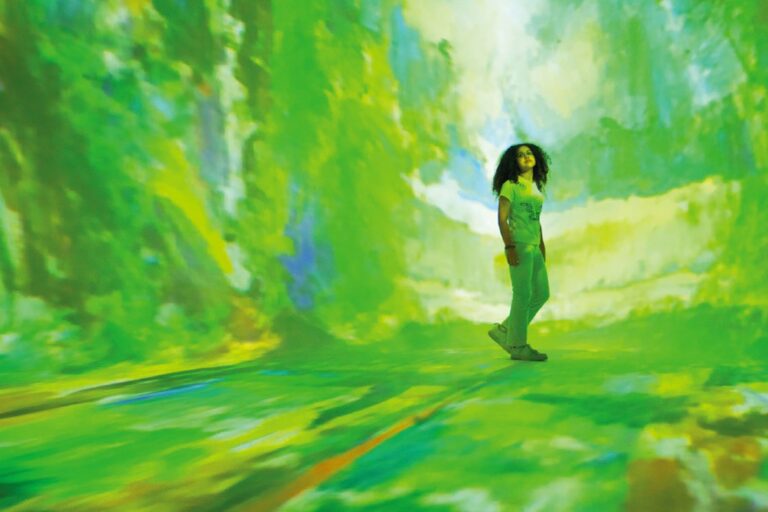 The show itself is divided up into four main gallery areas, the first of which is:

Beyond Reality – starting strong with some Surrealism & Symbolism, which will be displayed with a mix of projectors & mirrors in order to create an appropriately mind-bending effect. Expect dozens of works, spanning the likes of melted clocks by Dalí, terrifying hellscapes by Hieronymus Bosch, dream-like visions by Klimt, and much more.

Colour in Motion – next up is a chance for you to dip our own finger in the digital ink pot. Using “advanced motion tracking” this gallery gives you a chance to paint using movements and gestures, and create a few Impressionist masterpieces. Expect the place to be filled floor-to-ceiling with colourful inspiration from Van Gogh, shimmering daydreams from Georges Seurat, dappled masterpieces from Claude Monet, and more.

The World Around Us – the third room will be the largest of the lot, and it’s going to be about sheer scale. You’ll get to see the world as some of history’s most famous & influential artists saw it, on a nearly life-size canvas surrounding you. You’ll be trapped in Rembrandt’s Storm on the Sea of Galilee, you’ll be dropped in the Piazza Di San Marco as Canaletto himself saw it, and you’ll get to see the Sunrise over Norham Castle as depicted by JMW Turner.

The Art of Abstraction – the final gallery will be laid out as a maze for you to wander through, reflecting the dis-jointed nature of its subject: Abstract artworks will move across multi-layered, translucent surfaces, including images from Kandinsky, Mondrian, Klee, and others. And if you want to take things even further? Well, there’s a cafe/bar selling the usual coffee, booze, sandwiches, etcetera – and also a ‘Kandinsktea’ afternoon tea, with a selection of teeny tiny cakes inspired by the Russian genius. Of course, the artwork in this case…

…will be enveloped by you.