Out of all of the ‘magnificent seven’, a gang of old cemeteries (not cowboys) that were built around London in the 19th century to help take the load off overcrowded parish churchyards, Nunhead Cemetery is maybe the least well-known.

Overlooking it, though, would be a grave mistake.

When your ‘who’s up for the cemetery on Sunday?’ suggestion receives a few raised eyebrows from your pals, they’ll quickly come around when they realise it’s one of the most scenic spaces in the capital – rivalling London’s best parks for an afternoon of contemplation-filled wandering.

Consecrated in 1840, Nunhead Cemetery was abandoned in 1969 and left to its own devices for a number of years (Mother Nature kind of swooped in and did her thing) which is the reason for its wild, overgrown appearance today. That negligence turned out to be a blessing in disguise however, as the cemetery, besides being, well, a cemetery, is now also a Local Nature Reserve and thriving woodland area with an abundance of wildlife (bird watchers and butterfly spotters will have a field day…).

While it doesn’t attract as much attention as the rest of the magnificent seven, it’s the second largest of the lot (clocking in at a whopping 52 acres), so along with paying your respects, there are plenty of points of interest. If you’re the sort whose cemetery visits start with a search for the oldest gravestone, the first person to be buried at Nunhead was a 101-year-old grocer from Ipswich named Charles Abbot. He’s now in the company of nearly 300,000 others, and while Nunhead might not have the same star power as Kensal Green and Highgate, there are still many important figures of history to be found here, including Bryan Dorkin (one of the men responsible for opening the the first commercial canning factory in England) and Frederick Abel (the co-inventor of cordite). 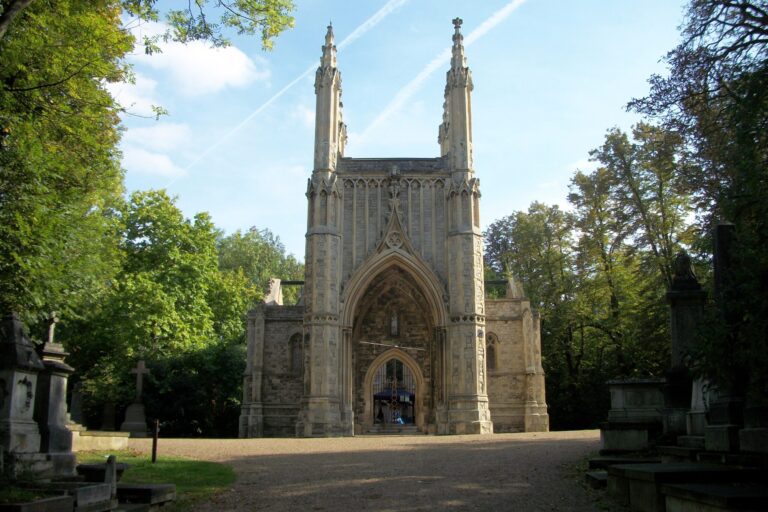 As for striking architecture to admire, Nunhead Cemetery has two chapels – or at least, had two chapels. The Dissenters chapel bore the brunt of a bomb blitz during the second world war, while the other still stands only in ruin – the Anglican chapel you’ll see in the middle of the grounds, which also makes for a good meeting place in case you get lost. It was the victim of an arson attack in 1976, hence the heavily damaged look, and is now known to host the occasional choir session.

If you want a proper history lesson, the Friends of Nunhead Cemetery – a group that’s been taking care of the grounds since it re-opened in 2001 – offer a tour on the last Sunday of every month (free, but donations are welcome) guiding you around significant monuments and tombs. You’ll also walk past the spot on the west side of the cemetery where you can sneak a view of St Paul’s Cathedral through the trees, purposely trimmed for that framed money shot. There’s a bench for any tired legs there as well.

It makes for a good resting place…

NOTE: Nunhead Cemetery is free and open daily from 8.30am-4pm (opening hours are extended a bit during Spring and Summer). For more information and the tour schedule, head here.

Love a graveyard stroll? Meet some of the other members of the Magnificent Seven – Highgate Cemetery, Abney Park or  Kensal Green Cemetery