Because over in the South-East Asian nation, they celebrate a thing called Loi Krathong, and it basically involves riverfuls of ornate floating candles, stunning fireworks displays, and a throng of inventive performances & displays. And this year, we’re getting a little taste of it here in London, thanks to Wishful.

It’ll take place over at the Royal Docks this Saturday the 28th September, and it’s going to be the grand closing finale of the Join The Docks Festival. And just to make sure that it’s off-the-charts spectacular, they’ve hired Jeanefer Jean-Charles to direct it. You may know her work from co-ordinating the opening ceremony of the 2012 Olympics. 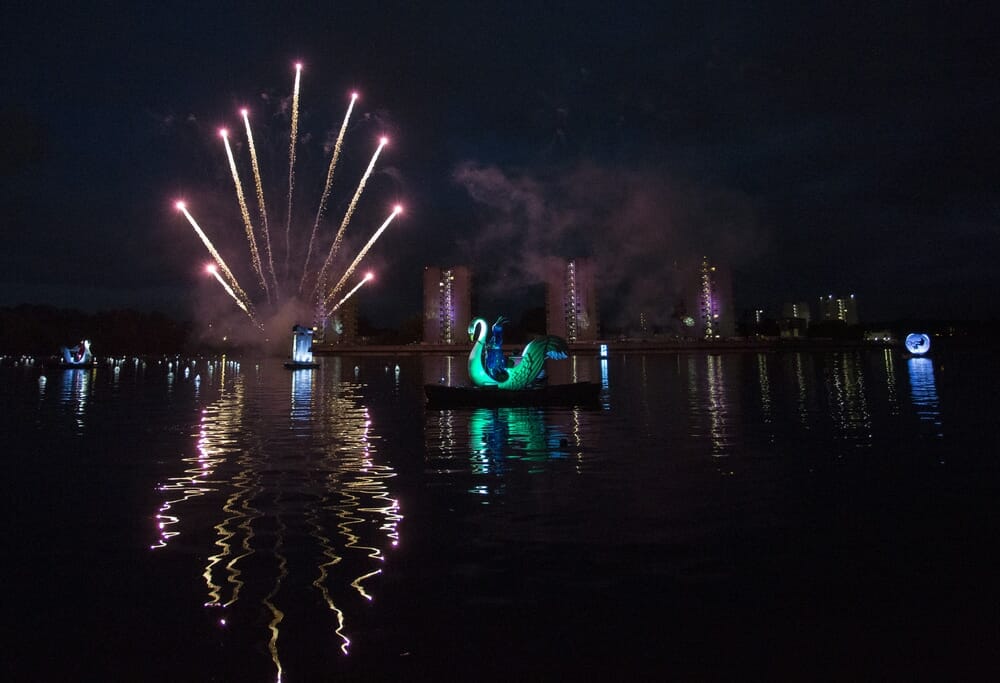 Here, she’s laid out an act in four parts: at the outset, you’ll arrive in a gigantic ‘mechanical garden’ filled with illuminated metallic oddities. Then, through this garden comes the carnival procession, led by ‘Earth’ himself (in the form of a giant puppet), and dozens of lantern bearers. Joining the river of people, you’ll then be led to an actual river with a nice viewing platform, where you can watch the main event unfold.

That main event is the release of the illuminated ‘wishing shrines’ into the water. There are literally hundreds of them, and they’re joined by giant floating swans carrying people, and an all-singing “operatic moon goddess”. Then, to cap it all off, it ends in a “shower of pyrotechnics” and fireworks against the backdrop of the Millennium Mills.

And if you fancy getting involved in a more meaningful way? You can help design some of the illuminated lanterns at one of the workshops being held on the day itself.

NOTE: Wishful is taking place on September 28th at the Royal Docks. Admission is completely free, and there is no booking. You can find out more at the website right HERE.