The Ritzy wasn’t always so ritzy.

Even when it opened in 1911, despite the best efforts of its grand Edwardian exterior and the organ-equipped auditorium, it was still seen as the “scruffy relation” of the nearby Pavillion. And by the 1980s the place had developed such a reputation for its perceived liberal agenda that general manager Claire Binns had to place an ad in the local paper informing people that not every film that the cinema screened was “left-wing or gay”.

Now, however, The Ritzy has aged like a fine wine and become true to its name as one of the plushest cinemas in London. It’s been Grade-II listed and looks every bit as picturesque as you would hope from a building with its history. Its five screens are all comfortable and reasonably sized, while the programme strikes the perfect balance between major blockbusters and independent films, plus late-night shows and classics. And the main auditorium – despite having lost the organ – is still just as magnificent. 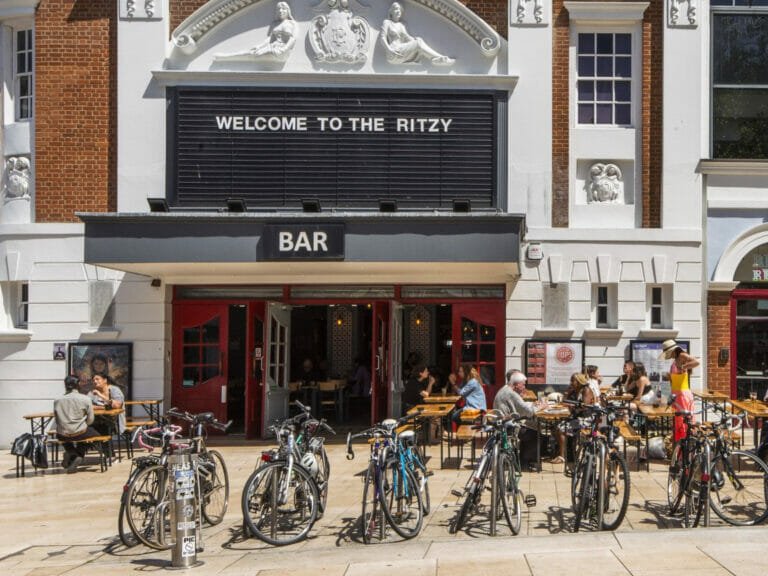 It’s also fitted with two bars, one of which spills out over Brixton’s Windrush Square. If you’re in the mood, you can score some amped-up diner food like stone-baked pizzas, all-rib beef burgers, or some smoked pork hotdogs in a brioche roll. And yes, there’s plenty of booze. And yes, you can bring that booze into the cinema screen should you want to.

The only problem? They’ve had a recent history of pay disputes with the staff, who believe that they’re not receiving a living wage. And given that they’re being paid less than the official London Living Wage, that seems valid. It admittedly makes it a little hard to support them, particularly because their campaign has been going on since 2007 and has been backed by people like Benedict Cumberbatch & Sir Ian McKellen.

Hopefully they set it out, and make their paycheques a little ritzier.

NOTE: The Ritzy is open now. You can find out more and book tickets at their website right HERE.

Looking for somewhere to grab a bite to eat beforehand? Have a gander at our guide to the best restaurants in Brixton.