The Ultimate Guide To Cinema In London | The Nudge

Cinema In London | The Ultimate Guide

Cinema In London | The Ultimate Guide

When you’re choosing where to go to the cinema, you want to look at the big picture…

Sure the location comes into it, as well as what’s screening where – but what about the seats? The snacks? The booze?

Nowadays London’s better cinemas can stretch from a £4.99 flick in a screen for two hundred (except you and the teenagers necking in the back are the only ones there), to a plush velvet sofa with a cashmere blanket and Champagne for two. Both have their moments. However, to make sure you make the right choice at the right time, we’ve listed all of what we’d consider to be the best cinemas in London below, as well as what makes them so…

It’s the original Everyman – a beautiful two-screener boasting both comfy chairs and sofas, as well as fancy food and drink delivered straight to your seat. Programming wise they show a mix of mainstream films and smaller independents, with a few live broadcasts (theatre, ballet, opera etc.) thrown into the mix. 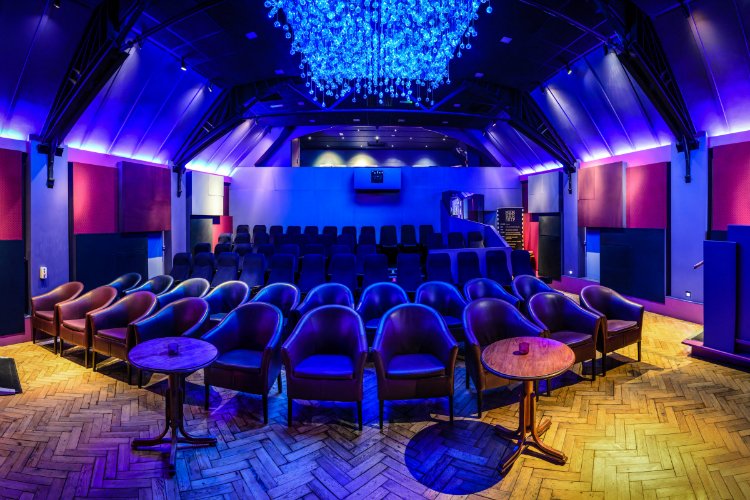 We like the Lexi because it gives back. More specifically, they’re staffed predominantly by local volunteers and give 100% of their profits to charity. Seat-wise, we’re talking regular cinema seats, as well as two rows of slightly comfier leather chairs at the front. For drinks, they have a small bar with some great craft beers, and there’s options like Joe & Seph’s popcorn for snacks.

Screen On The Green | Islington
Best for: poor decision-makers

It’s a one screen wonder offering both seats and sofas. As a member of the Everyman family, it also offers the same seat-service as Hampstead, meaning you can order a ‘Build Your Own Sundae’ with any two ice-cream scoops and your choice of three scrumptious toppings, before heading to the screen, where someone will hand-deliver it to you. 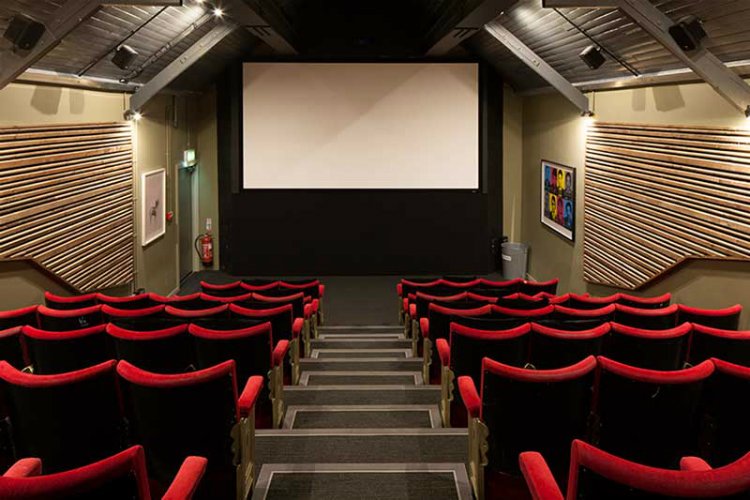 As the name suggests this handsome former Salvation Army Hall offers cinema, live music, comedy, and theatre. Cinema-wise they’re definitely in favour of more indepdent, arthouse stuff, although they do occasionally screen some the bigger blockbusters. We’re particularly fond of them for their ‘baby-safe’ screenings on Tuesday mornings, offering mums and dads the chance to catch a film worry-free and instead, openly ooh and ah along with their little’uns.

The Phoenix | Finchley
Best for: a touch of history

Opened in 1912, it’s one of the oldest cinemas in the UK, built when cinema first became a thing. It’s also loved for being independent which, despite recent money troubles, it’s proudly managed to remain. Admittedly the lobby and cafe could probably do with a touch of modernising, but the stripped-back, mismatched thing they have going on definitely has its own sort of charm. Either way the single screen is beautiful – art-deco in style with red seats and a thick gold curtain – screening mostly arthouse and independent films. 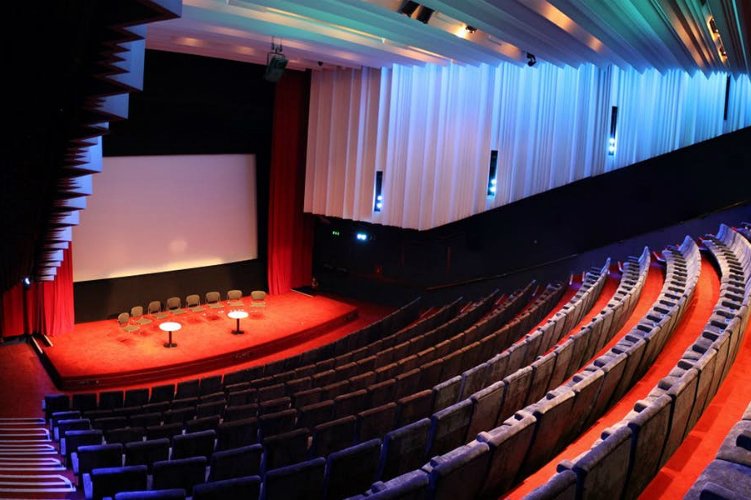 As well as two art galleries, two theatres, a concert hall and a tropical conservatory, The Barbican offers a three-screen cinema, one of which holds a mighty 280 seats. As well as most of the mainstream stuff, they’re notably good at programming interesting festival screenings, as well as some older stuff, documentaries and foreign language films, usually tied in with everything else that’s happening elsewhere in the space. READ MORE 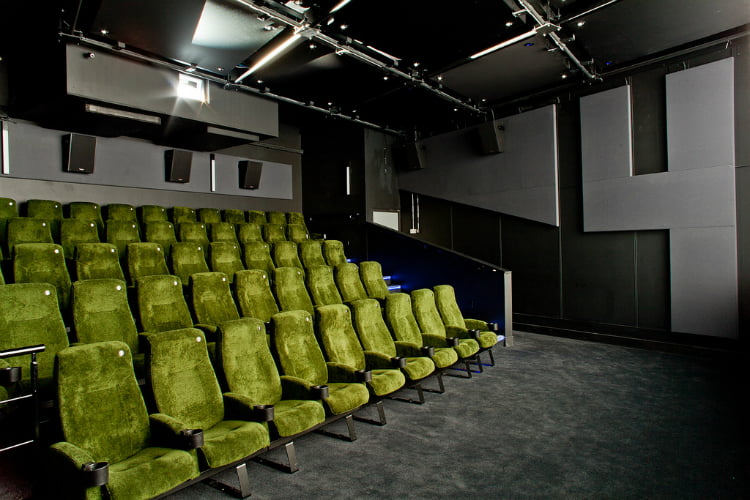 It’s a pretty big, modern, glass-fronted cinema in the middle of Mare Street – opposite Hackney Empire. There are four screens in total, showing everything from big blockbusters to smaller arthouse pieces; foreign language films; documentaries; and live arts broadcasts. On the ground floor you’ll find a relaxed, all-day restaurant and bar, ideal for freelancers, or bite to eat  – burgers, pizza, sandwiches, and salads – before or after the film. On the top floor is Hackney Attic – a multi-purpose arts space offering up poetry readings, sketch nights, and comedy. 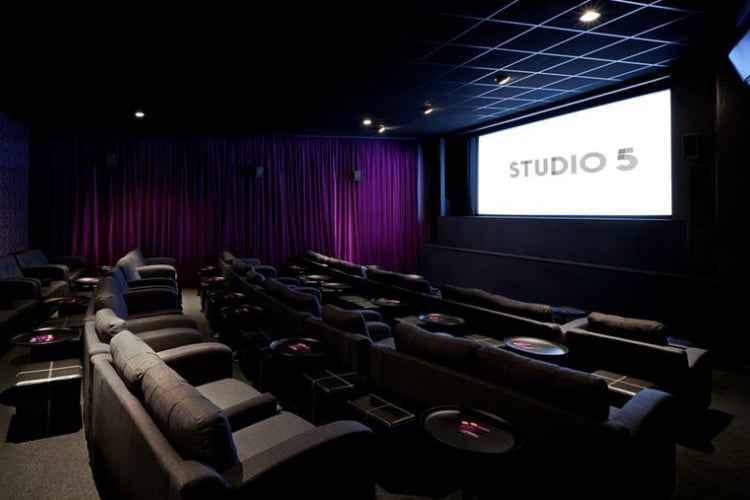 As the name suggests, Genesis was set up with the hope of revitalising Tower Hamlets’ then non-existent cinema scene. It’s not that cinemas never existed there – in fact, at one point there were 33. However, as the industry struggled, more and more doors closed until there was nothing left. In 1999 however, Genesis was born, offering up five beautifully designed screens (the guy who designed them works most of his time designing film-sets), a café, and bar. Programming-wise, it’s a bit of everything. Ticket-wise however, it’s in a league of its own, offering £5.50 screenings Mon-Wed. Plus two of the screens have sofas, and bars, meaning minimum effort and maximum drunk, comfortable, enjoyment. 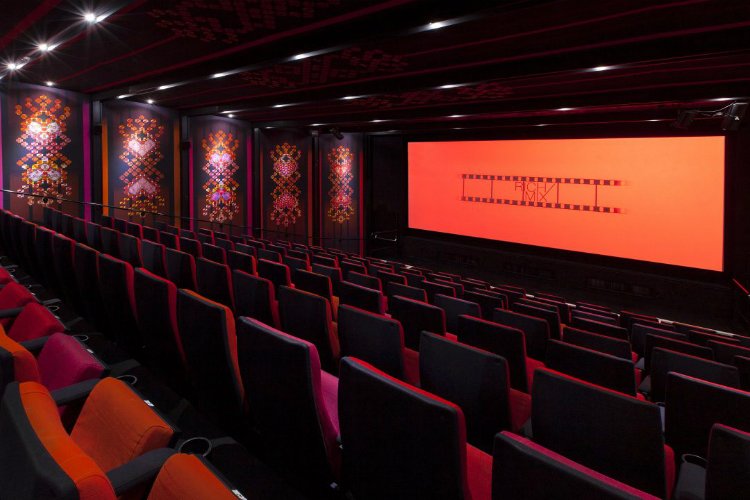 It’s an independent cross-arts centre and cinema, housed in an old leather factory in Shoreditch. There are three screens, showcasing everything from mainstream blockbusters to smaller festival films. Beyond the cinema there’s live music, theatre, dance, and more. They’re particularly great at giving under-represented minority groups a platform; plus, they’re a charity, whose profits all go to supporting arts and education in the local community, so 100% worth parting with your money for. 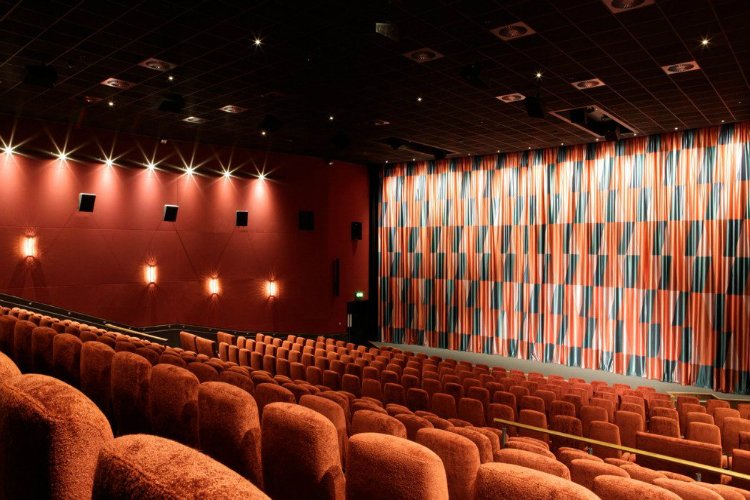 Tickets here don’t come cheap, although the Central London location, beautiful design, all-day cafe, first floor bar, and pick’a’mix served buy the cup (meaning you can really squash things in to get the most for your money) almost make up for it. They also have a dedicated documentary screen which means – beyond big blockbusters, indie, arthouse, and foreign language films – they screen daily documentaries from around the world. 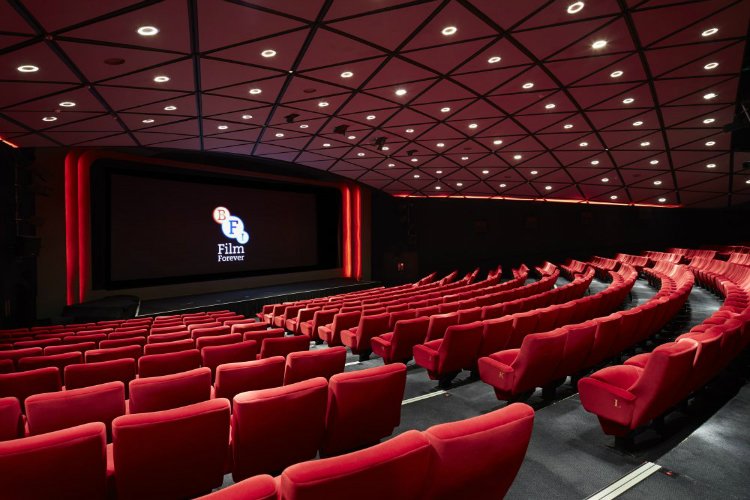 It’s kind of the epicentre of film in London – a melting-pot of actors, producers, directors, and film-buffs, working, hanging-out, or there to catch a film. It’s well-known for big film previews and star-filled Q&As, plus it’s the flagship venue for the BFI London Film Festival, as well as BFI Flare (the LQBTQ+ equivalent). It’s also home to the world’s largest film archive with 50,000 fiction films, over 100,000 non-fiction films, and around 625,000 TV programmes available to screen for free. Plus they have a library stacked with film and television-related books, and a film store selling movies and TV boxsets from around the world. In case you get hungry, they have two all-day restaurant-bars, one with a terrace over-looking the river, ideal for a romantic post film night-cap. READ MORE 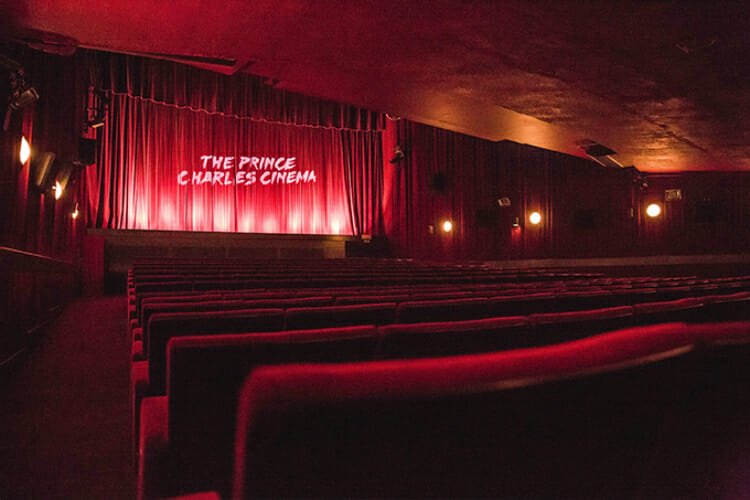 It’s the only independent cinema left in London’s West End, which is both sad and exciting, as it speaks to the quality of its programming. The only criteria they have is that a film is good, which means you’ll find a mix of both blockbusters and more arthouse stuff. They also programme a whole load of great, older classics – everything from Jurassic Park all-nighters to evenings dedicated entirely to 35mm film.

Address: The Brunswick Centre, WC1N 1AW | Adult ticket price: £16.50 or £9 for docs | Ticket promos: none | For exact screenings and/or to book tickets visit their website here.
– 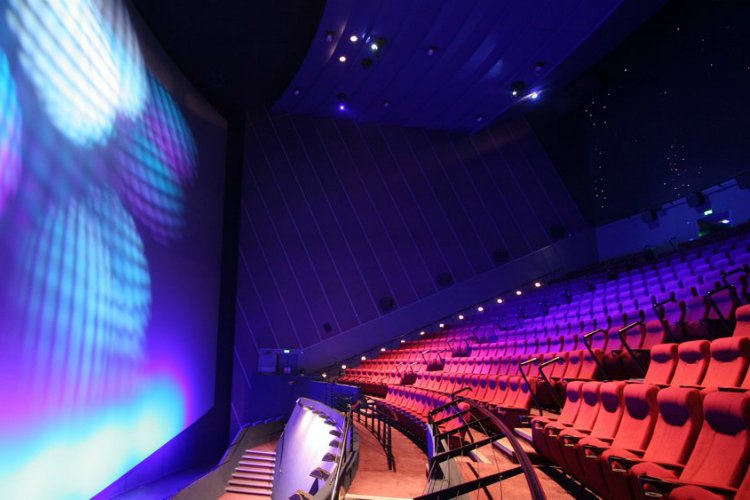 It’s the biggest cinema screen in the UK, nearly as tall as five double-decker buses stacked which – alongside a 12,000 Watt, state-of-the-art surround sound system, and a wapping 500-seat capacity – makes it the ideal place to lose yourself in big blockbuster films. 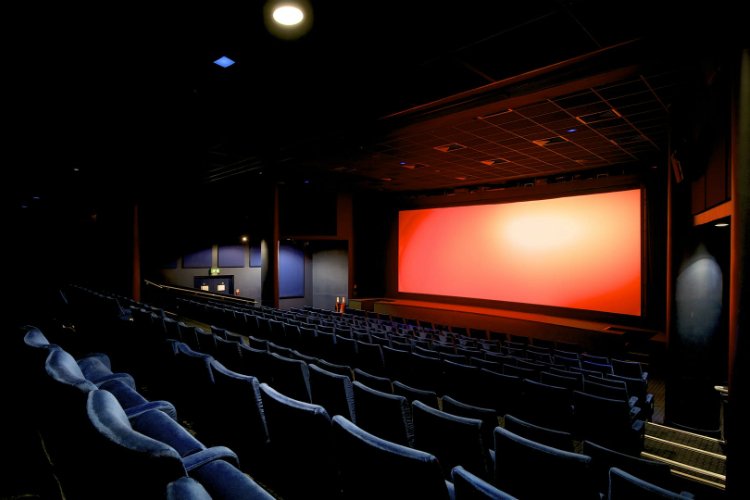 If you fancy something a little more low-key than Picturehouse Central, then Curzon Soho might be your bag. It’s still got the same winning Central London location, but it’s smaller, and a little more laid-back. You enter to a ground floor cafe-bar where you can get yourself some cinema snacks, and a soft drink, beer, or glass of wine, before heading to one of three screens. Here you’ll find a mixed-bag of stuff, with highlights including previews of smaller art films; festival screenings; and a regular Docdays documentary strand.

ICA | Charing Cross
Best for: feeling like a radical 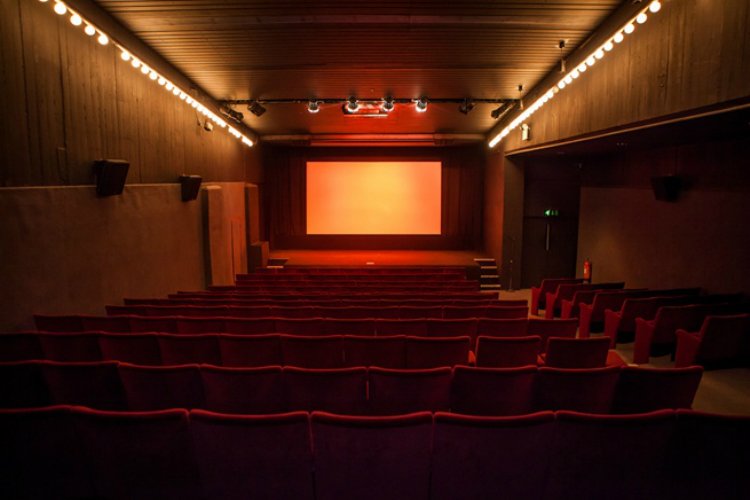 Founded in 1946 – moving to its current location in the Spring of ’68 – the ICA was set up with the hope of showcasing, and leading discussions around contemporary art of all forms. It’s not just a gallery or a cinema – or at least its directors don’t see it that way. Instead they see it as ‘a free space, in which the deepest questions that concern us as individuals and society can be explored’. It’s a place that prides itself in pushing boundaries, and being first: the birthplace of pop art; the first place to stage major institutional exhibitions by Pablo Picasso, Damien Hirst, and Steve McQueen; and concerts by The Clash, The Smiths, and David Bowie. Cinema-wise it’s well-known for its support of independent film, which still continues to this day. You’ll find independent releases; arthouse films; foreign language films; retrospective collections; documentaries; festival screenings; and 35mm screenings; all within their two simple, stripped-back screens. 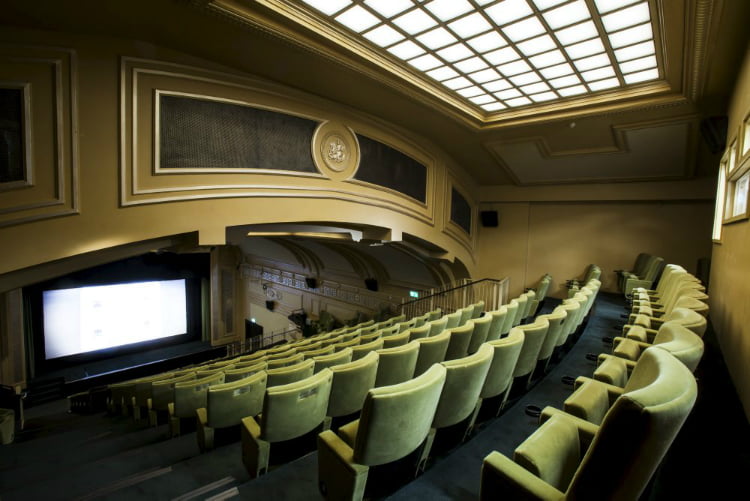 Built in 1848, it’s considered the birthplace of British cinema, as it was here that they screened the first ever moving picture. It actually closed down in 1980 to be used as a university lecture hall, however, come 2015 it reopened its doors to London’s cinema folk, offering a mixture of all of the latest movies; as well as repertory screenings; retrospectives; documentaries; animation; experimental cinema; and both 16mm and 35mm film. 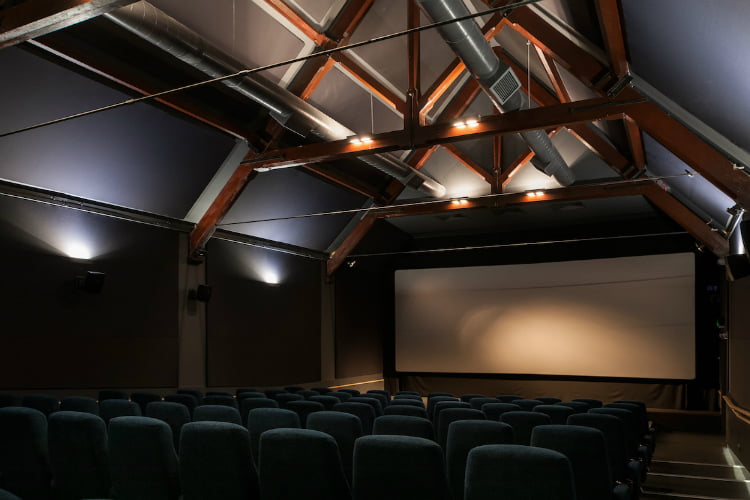 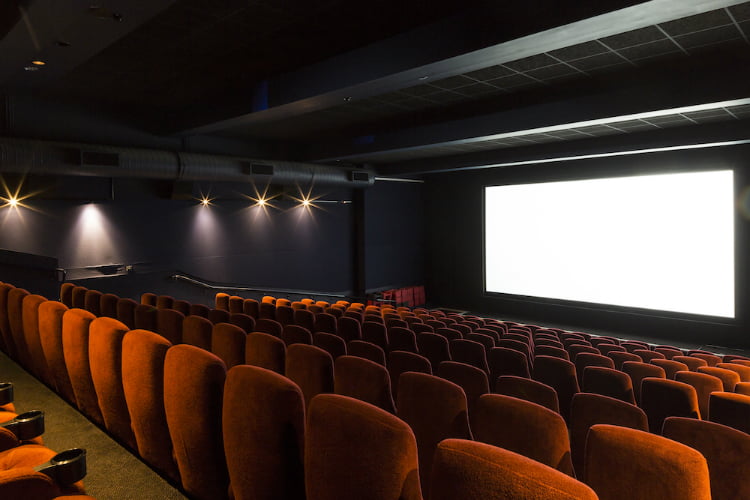 It’s a nice finishing point, after a long stroll in Greenwich Park, either to curl up in one of their five cinema screens, and watch a film; or to grab a drink and some food either of their two restaurants. Some days, mostly later in the week or weekends, you might be lucky enough to stumble across some live music, or comedy, hosted for the most part in their basement lounge bar.

The Ritzy | Brixton
Best for: location 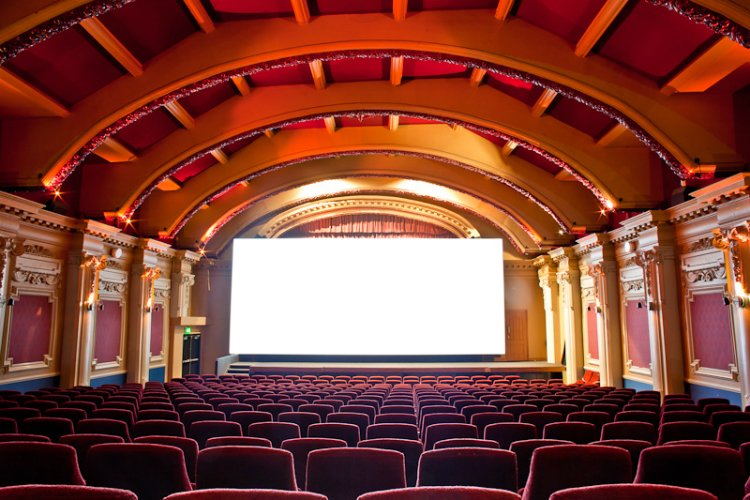 This five-screen cinema is something of a Brixton institution, fitted with two bars – one of which spills out onto Windrush Square. As well as cinema, they offer a variety of other cultural goings-on, including live music, open mic nights, board game nights, and more. One thing to note, however, is their ongoing refusal to pay their staff London living wage, which admittedly makes it currently a difficult place to support. 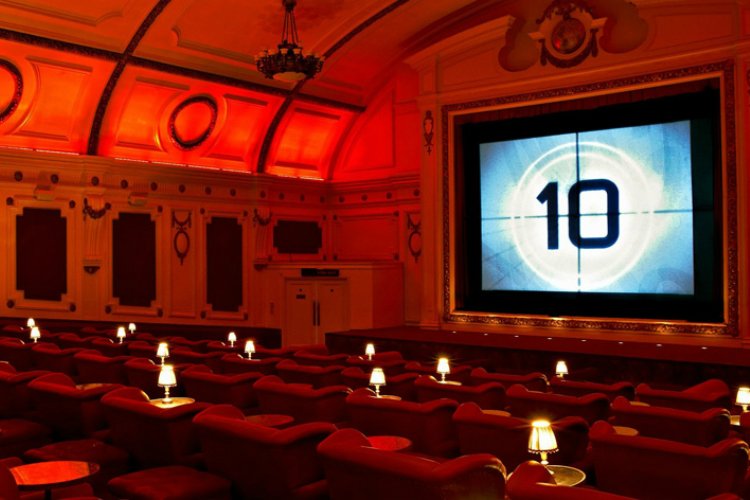 Over 100 years old, The Electric in Notting Hill has survived not one but two world wars. More recently it’s been taken over by the team behind members club Soho House, who – at the same time as preserving many of its rather beautiful original features – have fitted it out with a cocktail bar; big comfy chairs, sofas, and beds; individual side tables for snacks; making it undeniably one of London’s most luxurious cinemas. READ MORE

The Olympic | Barnes
Best for: luxury inside and out 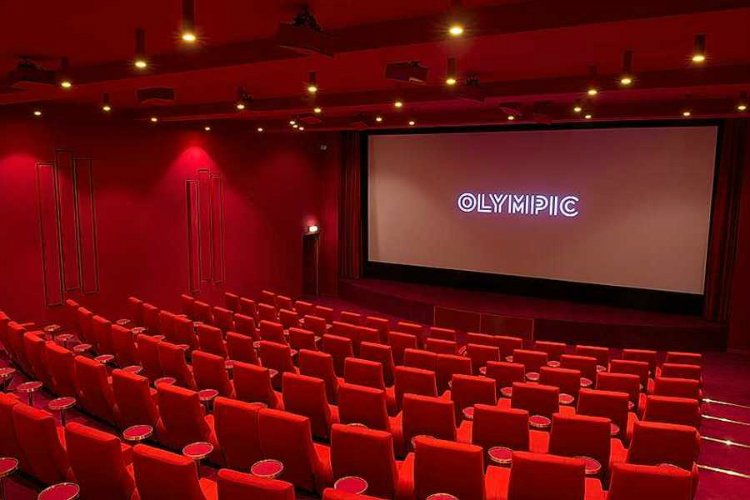 The Olympic’s a beautifully designed two-screen cinema in Barnes, boasting big, comfortable seats and sofas, all with individual bespoke brass tables specifically designed to hold a tea, coffee, or bottle of wine, alongside a bag of popcorn or sweets. Beyond the cinema they have a really lovely all-day cafe-restaurant serving seasonal produce, sourced from local suppliers, as well as freshly baked cakes. They also have a terrace, where guests are able to dine al fresco, under huge, pink blossom trees.

Got a bit of time to kill before the film? Check out our guide to London’s Best Wine Bars.