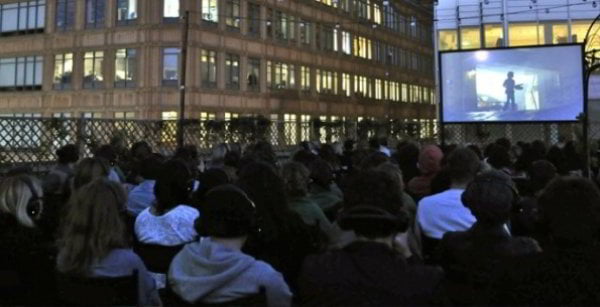 Remember when Fat Dave spent the summer holidays dieting and working out, then came back to school looking super-fit and healthy?

Discussing the Rooftop Film Club’s recent screenings has, in a similar way, felt a little off (given the absence of any actual rooftop locations).

But fortunately all is now right with the world, as Rooftop Film Club have announced a new program of classic films on a selection of genuine London rooftops, from Shoreditch to Kensington.

The screenings – which start at the beginning of May but are already selling quickly– will be held on top of The Netil in London Fields; in the Kensington Roof Gardens; and on the roof of the Queen of Hoxton.

Films are shown via big screens with wireless headphones, and highlights include: Ferris Bueller’s Day Off; Coming to America; When Harry Met Sally; The Big Lebowski; The Graduate; and Notting Hill.

NOTE: You can book tickets and find out more HERE.

Like alternative events and quirky experiences? Check out our guide to the best of what’s on in London this month.

Various Rooftops, All Over...., London,