The only differences, really, are that the Elliots are brothers who sell pizzas, don’t own a Batmobile, never wear tights to work and fight no crime.

Other than that, they’re identical.

The journey undertaken by the enterprising duo known as the Pizza Pilgrims commenced with the purchase of a “Piaggio Ape” van, which they kitted out with a pizza oven and drove across Italy slower than you could have crawled across it. Their journey continued on their return to London, with the establishment of a successful street food outfit in Soho and the authoring of a book about their experiences; and then it culminated last summer with the opening of their very own restaurant on Dean Street, Pizza Pilgrims Soho.

Sadly, however, every good journey must come to an end.

Unless you’re them, because they’ve also opened Pizza Pilgrims Carnaby. 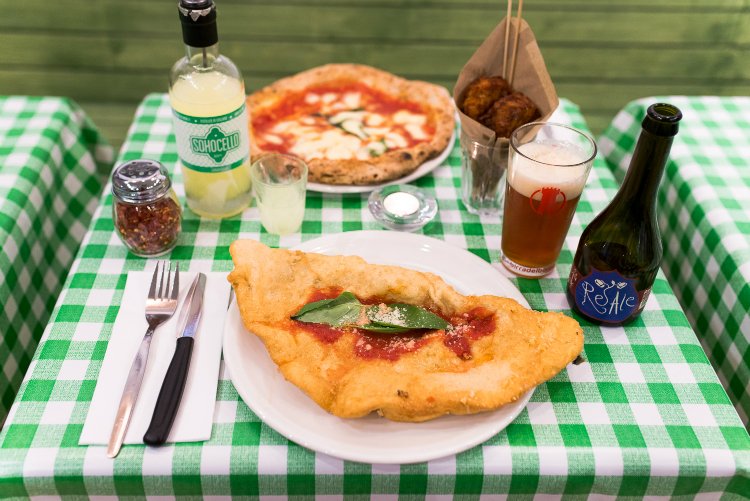 A Pizzeria and Frigittoria located just off Carnaby Street, it contains that rare (but highly sought after) combination of Italian food, al fresco dining, table football, arcade games and nineties music. On the pizza front you’ll find authentic Neapolitan pies like The Pilgrims’ popular Nduja, and that one that has Portobello Mushrooms & Truffle on it. And frigittoria-wise you’ll find the types of fried dishes that one might usually expect to find at the pavement cafés and food carts of Naples: from arancini stuffed with oozy mozzarella and fried calzones, to deep-fried breaded artichoke hearts.

To drink there are Sohocello shots and cocktails, craft beers from Lazio’s Birra del Borgo and wines by the Nespoli winery in Emilia-Romagna. And for dessert they’ve happily elected to stick to their tried-and-tested menu of olive oil ice cream (it works) and Nutella Pizza Rings.

Which is mainly good news because Nutella Pizza Rings.

NOTE: Pizza Pilgrims Carnaby does not accept reservations: just turn up for lunch or dinner whenever you fancy.

Find out more about all the Pizza Pilgrims restaurants in London