It’s crucial to mullet over.


Of course, it helps if you already know what you’re doing. And with several venues across the capital, the Wright Bros are already a pearl in the, ahem, oyster, of seafood restaurants. Not content with serving up some of London’s most mouthwatering marine life, this time they’ve also thrown in a cocktail bar for good measure, meaning you can visit either…


A smart blend of bentwood chairs, dark wood panelling, and Impressionist-era prints combine to evoke the sophisticated charm typical of their other sites. This one is a much smaller affair than its sister venues, however, which does provide a cosier experience – albeit a harder one to get a seat at.

Unsurprisingly, oysters feature heavily on the menu. You can enjoy them on the rocks or with a variety of dressings – cue caviar, lemon gratina, jalapeño, even cucumber, apple, and dill. There’s a wealth of shellfish to follow, with whelks, Dorset crab, Isle of Lewis langoustine, and St. Austel Bay mussels amongst the offerings. For those who prefer supper with a spine, there’s also baked sea bream, grilled salmon with haricot beans, roast hake with salsa, and confit duck leg with anchovies.

Alternatively, you can head straight downstairs to… 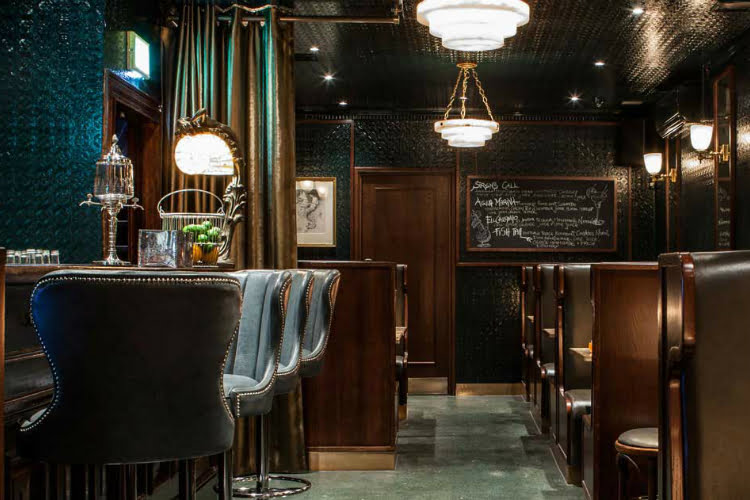 Dimmed lighting, leather upholstery, and booth seating give this below stairs cocktail & oyster bar a touch of the Orient Express. Here you can sip on concoctions including the Lychee & Rose Sour, Patron Sangarita, and their signature Bloody Mary –  which comes complete with oyster on the side. At the same time you can sup on a selection of canapés including pork belly with chilli aioli, seared beef carpaccio, salt cod croquette, and lobster roll.

With all that to graze on, just be careful not to pull a mussel.