Apart from both being noble-sounding creatures with possessive claims to features on a map, they don’t appear to have much in common.

Because the sixth branch in the rapidly fattening beef empire has landed there, and it’s got all the low-lit vintage charm of the other beef temples in the Hawksmoor Group – leather seats, Art Deco lighting, etc. – but with a couple of little nods to the neighbourhood, including a large marble banquette cutting through the middle of the restaurant, and a caviar blackboard, with the day’s roes scrawled onto it, which brings us neatly to:

THE THINGS THAT ARE DIFFERENT

In a word: seafood. But as opposed to the parochial charms of the Air Street branch‘s own fish menu, the swimmers here are all luxuriant, exotic, and Knightsbridgey. You’ll find the aforementioned caviar (with or without chilled vodka), Vietnamese-dressed oysters, Brixham lobsters (either devilled Singapore-style, or thrown into a roll with yuzu & sriracha), and the real showstopper: a giant, house-made, Ferrero Rocher-style chocolate ball for dessert. 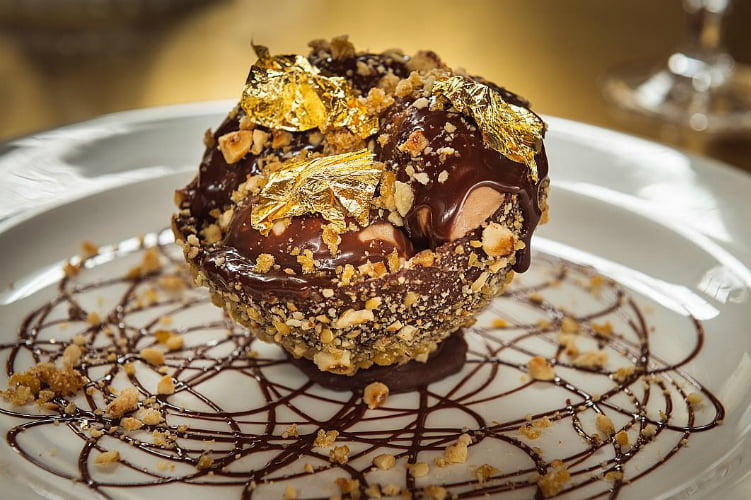 THE THINGS THAT ARE THE SAME

In a word: meat. Thank God. You’ll find all the classic cuts, from the sirloin and perpetually surprising d-rump, to the huge tomahawks, bone-in prime rib, and porterhouses. Of course, you can casually throw on half a lobster as a garnish, with some of their triple-cooked chips on the side, too. And finally, there are,

Given that their cocktail list has been all-but perfected, it stands as no surprise that it’s the same list here. Shakey Pete’s Ginger Brew, the Hawksmoor Collins, the Nuclear Banana Daiquiri, they’re all here. Plus the craft beers. And a good ol’ cornflake milk milkshake – which, despite the fact that you can get them at all the Hawksmoors…

…is still quite rare.

NOTE: Hawksmoor Knightsbridge is open daily from 12-3pm and 5-9.30pm (all day service on Sundays). You can find out more and book on their website HERE.