The nation’s snack-makers need to hurry up and invent them.

But until then, we’ll have to get our boozy sustenance from places like The Drop, which comes to us from the team behind Michelin Star-winner Barrafina and taco capital El Pastor.

It’s named in honour of both the eponymous wine measurement and the area it’s planted roots in, Coal Drops Yard. This formerly crumbling patch of King’s Cross was once a sorting area for deliveries of coal from the North; now it’s been fully and unrecognisably made-over (à la Granary Square) to include industrial-chic public squares, independent boutiques, and a load of bars and restaurants. One of which is this one. 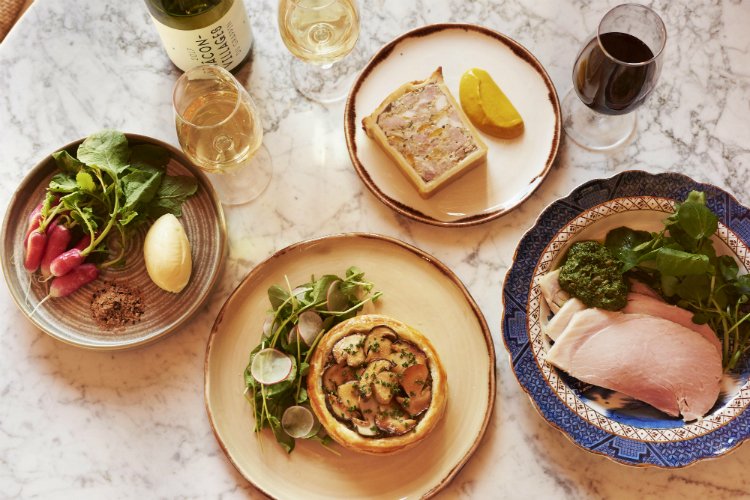 You’ll find it in a brick railway arch (handily, right by Barrafina and Casa Pastor), which you’ll easily be able to recognise thanks to the ice-filled oyster cart parked outside on the al fresco terrace. Inside it, the bare-brick walls gently curve up to become bare-brick ceilings, giving the space an appropriately cavernous, wine cellar-like feeling. All in all, it feels quite intimate, a sense that’s heightened by the warm terracotta flooring and subtle lighting.

On the menu, you’ll find a carefully picked wine list, curated with the help of Above Sea Level’s Aimee Hartley. There’s a bit of everything on there, from well-known bottles to the more unusual, with a vague slant towards smaller producers and low-intervention vineyards. The basic idea is to cover virtually every price point, and every style, while obviously making sure it’s all, you know, delicious.

As for the food? Well, it kind of takes a back seat thanks to the fact that the kitchen only has two hobs and a single oven (hence touches like the oyster cart outside) but they’ve certainly made the most of it, with a British menu of  hake with shrimp and lemon butter; some English onion soup with Montgomery toast; a guinea fowl and griolle mushroom pie; or a little marinaded Black Angus beef among others. And for dessert? There’s a comforting selection of treacle tart with crème fraîche, or a dark chocolate pot & shortbread.

Just try to remember, it’s all about the wine.

NOTE: The Drop is open Tuesday – Sunday. You can find out more, and book, at their website right HERE.

Partial to a glass of vino? Peruse the London’s best wine bars here