Considering that during the past two years there have been times where it was illegal to go to a different tube zone, we all have a lot of making up to do when it comes to travel.

And sure, you could commission some kind of Phileas Fogg hot air balloon; blow all your savings on a cruise or release a small country’s-worth of carbon emissions by flying round the world this summer… or, you could journey all the way to er, Islington, and enjoy one of the best parts of travelling – the food – on home turf instead.

See, the National Geographic Traveller Food Festival is coming back to town after a three year hiatus, and it’s aiming to take all the legwork out of trekking the globe by bringing dishes, chefs and ingredients from basically everywhere on earth into one place. 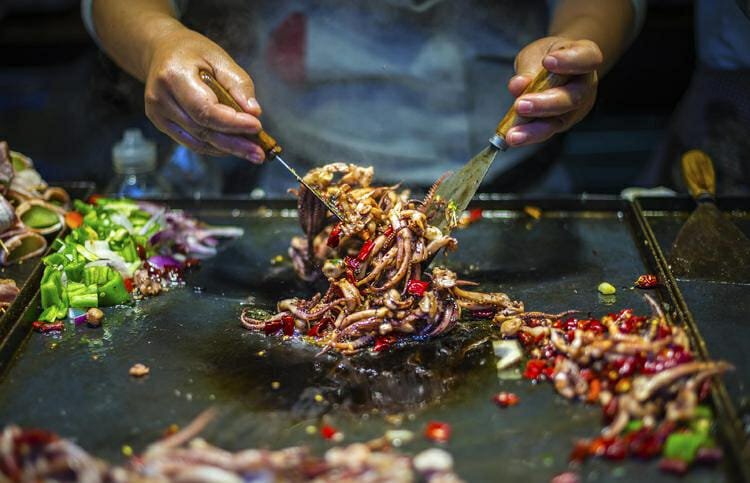 Over two days this July, they’ll be stuffing the vast Business Design Centre on Upper Street with food and produce stalls from all kinds of delicious and interesting world cuisines. But that’s not all.

Because as well as the stalls, there’s also going to be a stage showcasing live cooking demos & talks from esteemed chefs like José Pizarro (who runs three excellent Spanish restaurants in London), Masterchef winner Ping Coombes, the formidable Romy Gill MBE, pop-up darling Ixta Belfrage, and supperclub stalwart Olia Hercules. And over in Speakers’ Corner, you’ll be able to hear from a line-up of top foodie commentators, too, from critics Jay Rayner and Grace Dent, to Burmese food writer MiMi Aye and serial cookbooker, Felicity Cloake.

There’s going to be an area set aside for masterclasses too, which has previously involved making “a tofu and seaweed charcoal burger”, brewing Jing Tea (the tea of choice for “more than 100 Michelin-starred restaurants”), and cooking some of Montenegro’s unusual local dishes.

After which, you can travel to the most exotic destination of all…

NOTE: The National Geographic Traveller Food Festival takes place on 16th & 17th July 2022 in the Islington Business Design Centre. You can book tickets (£20), and find out more about what’s on, right HERE.

Like exotic food? Here are some of the most unusual restaurants in London…