The Best 24-Hour Restaurants In London

At least where London restaurants are concerned.

See, whether you’re working through the night, stumbling home, can’t sleep, or up early to get some place, if you’re hungry, you’re certainly not without options. Spattered throughout the city are dedicated all-night eateries, serving everything from a full English to crispy shrimp with rap-seed mayo and flatbread. There are also a couple of places worth nothing that aren’t open the full 24 hours, but late enough: a retro-inspired pizza joint serving New York style pizza by the slice; a secret cocktail bar and dim sum lounge; and an Obama (yes the Obama) favourite; all of which we’ve listed for you below…
– 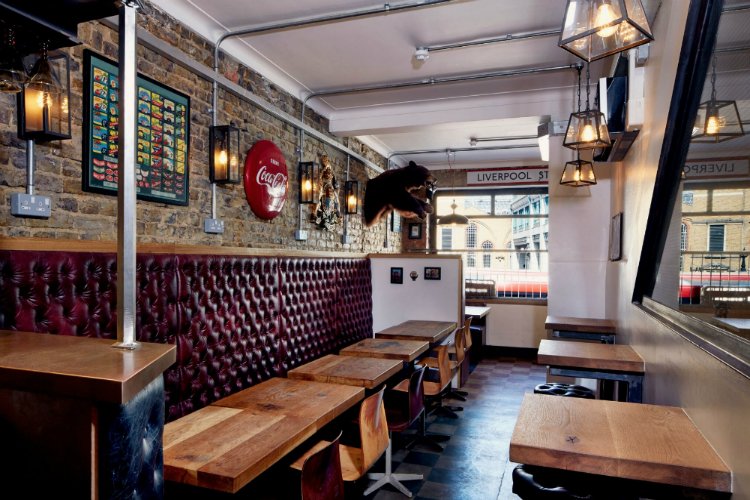 If you’re out late and hungry, you’re probably looking for a hole in one…which is exactly what you’ll find at Polo, an ode to the traditional British caff, located moments away from Liverpool Street Station. Not only is it incredibly convenient, it’s also a laid-back, no-fuss kind of place, where the primary focus is serving freshly-made, delicious food to the folks of London. If you’re looking for fancy this isn’t it, and ‘cool’ might be pushing it (although it does offer up some classic East London exposed brick and Chesterfield-esque booths). But if you’re looking for generous portions of comfort food…well, then roll right in. We’re talking everything from all-day breakfast (including a make-your-own breakfast sandwich); fish and chips; sausage and mash; steak and ale pie; and a whole load more. If you have a sweet tooth they do a mean banoffee, as well as red velvet pancakes. Or, if you’re just after a last pint before a taxi home, there are plenty of beers, wine, and a few cocktails on offer for less than a mint. 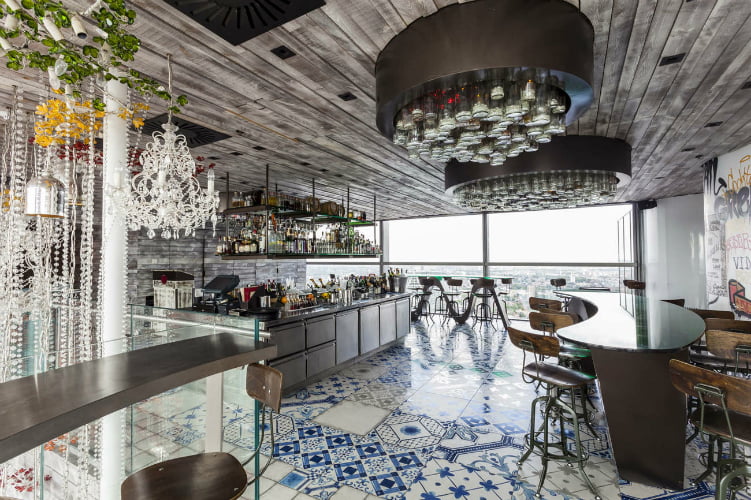 Another quacking 24 hour spot is Duck And Waffle, the famed sky-high restaurant on the 40th floor of the Heron Tower, boasting floor-to-ceiling windows and panoramic views of the city. As the name suggests, it serves up both duck and waffle in a variety of forms, as well as a number of other more traditionally British dishes. While their late-night menu is shorter than usual, you can still score their signature dish – confit duck leg atop a Belgium waffle, topped again with a fried duck egg, and drizzled in mustard maple syrup. Of course you might prefer to visit early one morning instead of late at night, in which case their caramel banana waffle with homemade hazelnut and chocolate spread, vanilla ice cream and peanut crunch might be closer to what you’re after, washed down by one of three Champagne cocktails, with a 360° view of London at sunrise on the side. READ MORE 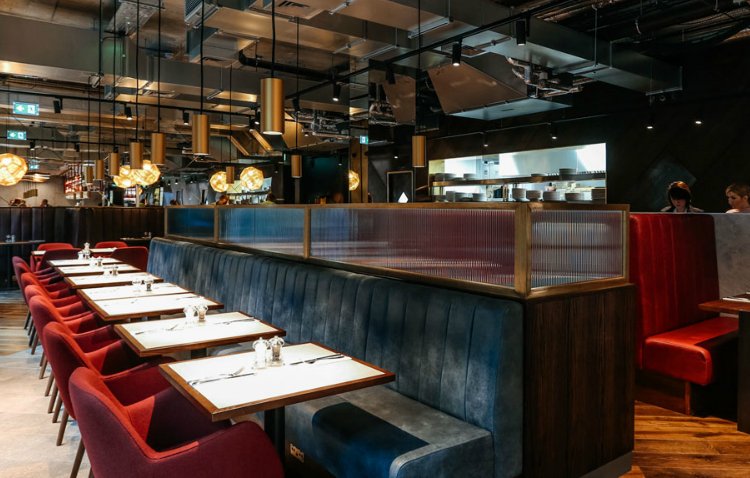 If you’re out and starting to doubt there’s anywhere still open serving food, you’re going to want to break…fast, namely at Vingt Quatre, where 24-hour breakfast is their speciality. There’s a total of five Vingt Quatre sites around London (VQ’s for posh people and millennials), but it’s Chelsea, Bloomsbury, and Algate which are open into the wee hours. Here you can end your night with a breakfast wrap stuffed full of scrambled eggs, chorizo, hash browns, roasted peppers, fried onions, and guacamole; or steak and eggs…pancakes…or Belgium waffles. And really, breakfast’s just the start of it. They also offer pretty much all of the ‘day-time’ menu – burgers, sandwiches, pasta, apple crumble, banoffee pie, and sticky toffee pudding – at night too. All of which can be accompanied by freshly squeezed juice, smoothies, milkshakes, and/or booze. 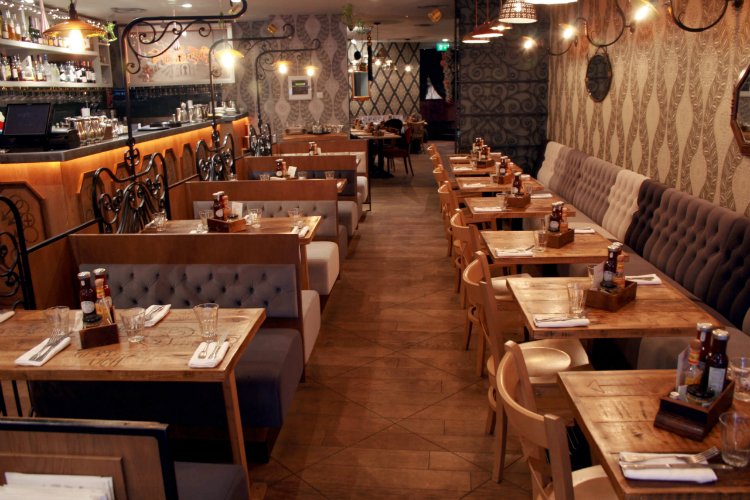 Something of a Soho institution, this place is well-versed in the slurry, over gesticulated needs of Londoners at night. In fact, according to their self-written philosophy – ‘All hail the rogue, the rascal and the reprobate’ – the messier the better. Which means you can stumble in there post 3am, and order pancakes with bacon and warm maple butter without judgement. In fact, they have an entire 24-hour breakfast menu on offer, including a full English, eggs in many forms, and…house-baked granola. Alternatively, if you’re not in mood for breakfast, or want to fit in a quick second dinner beforehand, their late-night menu also includes a small selection of their ‘Quintessential Balans’, like their Infamous Balans Burger of Red Leicester, maple bacon, lettuce, tomato, pickle and red onion (with fries); Cornish crab linguine; and a 10 oz Hereford Rib Eye Steak, because you might be drunk, but… protein.

Admittedly Beigel Bake isn’t  a restaurant, so really it depends whether you’re after sustenance or shelter (whilst your partner calms down and takes the chain off the door). If it’s the former however, you’re in luck, because what it lacks in tables it makes up for in experience. In fact they’ve been serving bagels stuffed full of cream cheese; or salt beef, mustard and pickles; 24 hours a day, seven days a week, for over 30 years. So if it’s late, these guys will mostly definitely help you Beigel Bake it through. 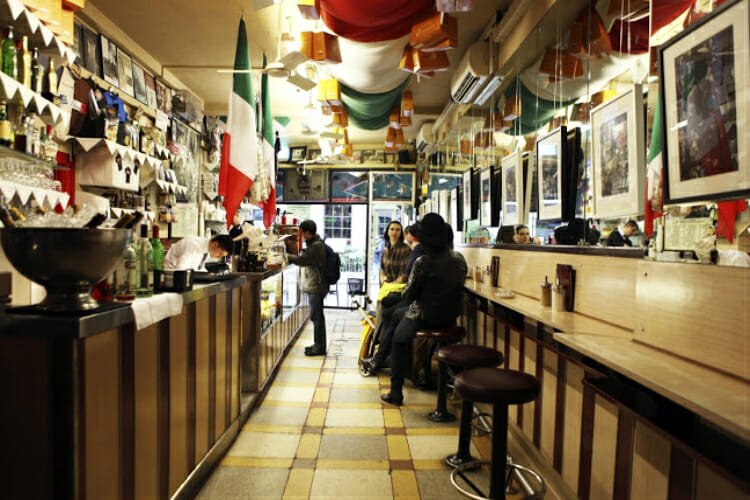 Another one unlikely to give you the boot is Bar Italia. Well, at least not the kicking you out the door kind. Next to laser-lit, cheesy music, late-night dancing institution Little Italy, they’ll happily serve you Italian pizza and paninis late into the night. 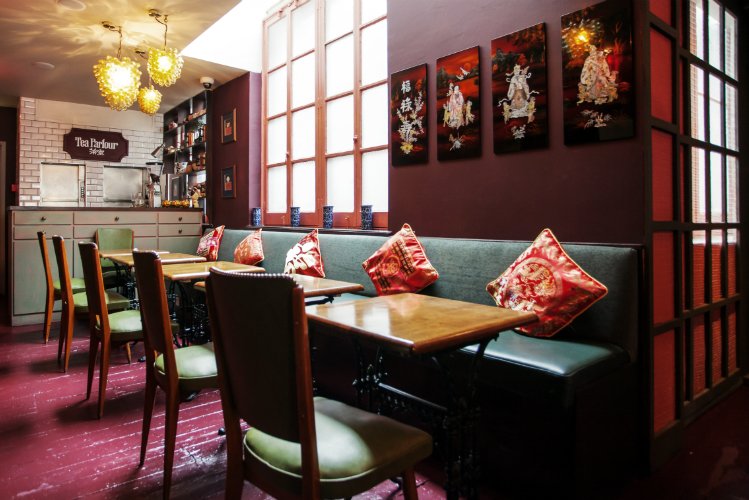 Part cocktail bar, part dim sum lounge, hidden amongst the hustle and bustle of Chinatown. You have to know about it to find it, behind a nondescript door on Gerrard Street, which will then lead you up some stairs and into part one of what will eventually transpire to be three rooms. This first room is The Apothecary where, propped up at a small 15-seater bar, you can drink from a menu of medicinally-inspired cocktails; as well as spirits, beer, and wine. They also do baskets of dim sum stuffed full of everything from king prawn to mushroom and truffle if you’re in the mood. Next is the more intimate Peony – tucked behind a red curtain it offers a number of private tables, as well as a whole new cocktail list, this time based on various regions around China. Finally is Academy, the attic bar boasting the Bartender’s Table, a small square table which you’re invited to sit around and both chat to, and order cocktails from the head bartender himself. READ MORE 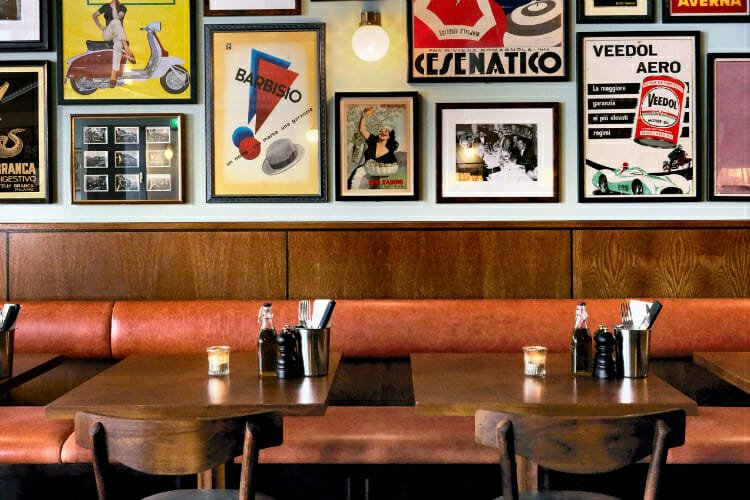 Brought to you by the same folks behind world-famous Soho House is Cecconi’s, a Central London pizza bar serving delicious wood-fired pizzas, handmade pasta, and a selection of cicchetti (Italian tapas) until late into the night. For drinks they’ve got jugs of beer, as well as both Aperol Spritz and Negronis on tap. Which, along with live DJs until 3am on weekends, works out pretty great whichever way you slice it. READ MORE. 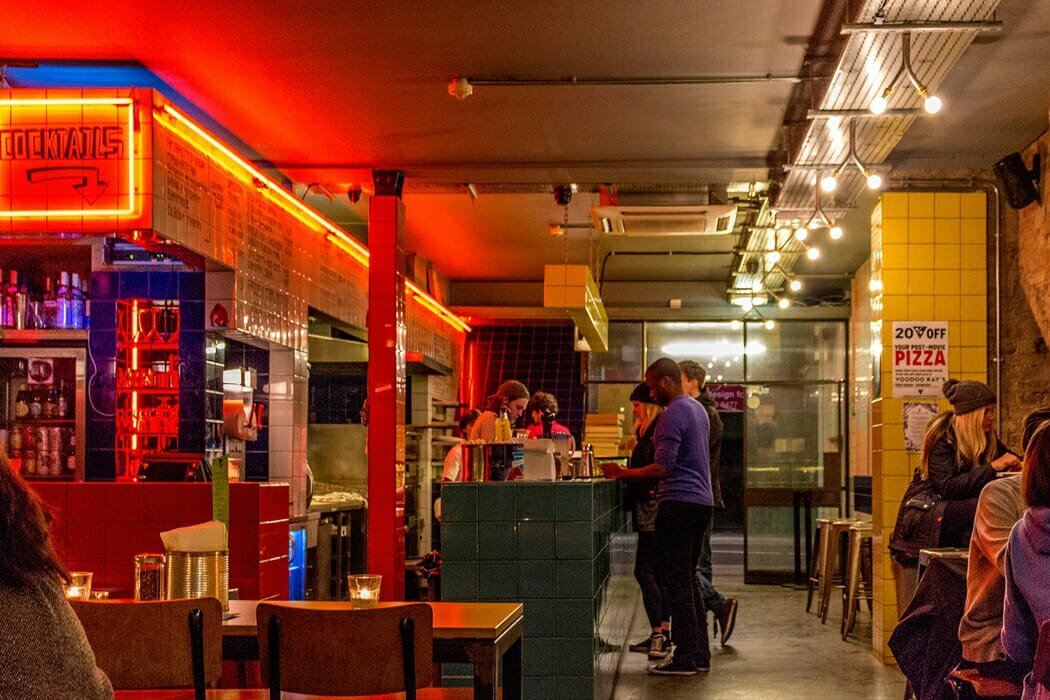 A glowing beacon of hope on the otherwise rather dark Kingsland Road at night. It’s a trendy, retro-styled pizza joint serving 22” New York-style pizzas by the slice. Topping-wise, there’s everything from The Meat Is On (minced steak, pepperoni, ham, streaky bacon, mozzarella, and tomato sauce) to the Queen Vegan (artichoke hearts, green olives, red onion, sun-blush tomatoes, tomato sauce and green sauce); as well as mac & cheese and slaw for sides. Depending on where you are in your night, they also offer various spirits, beer, wine, and cocktails, including frozen margaritas and seasonal spiked slushies, in their neon-lit downstairs bar. Yum. READ MORE

Looking for somewhere to burn off some energy first? Take a look at our guide to the best clubs in London.