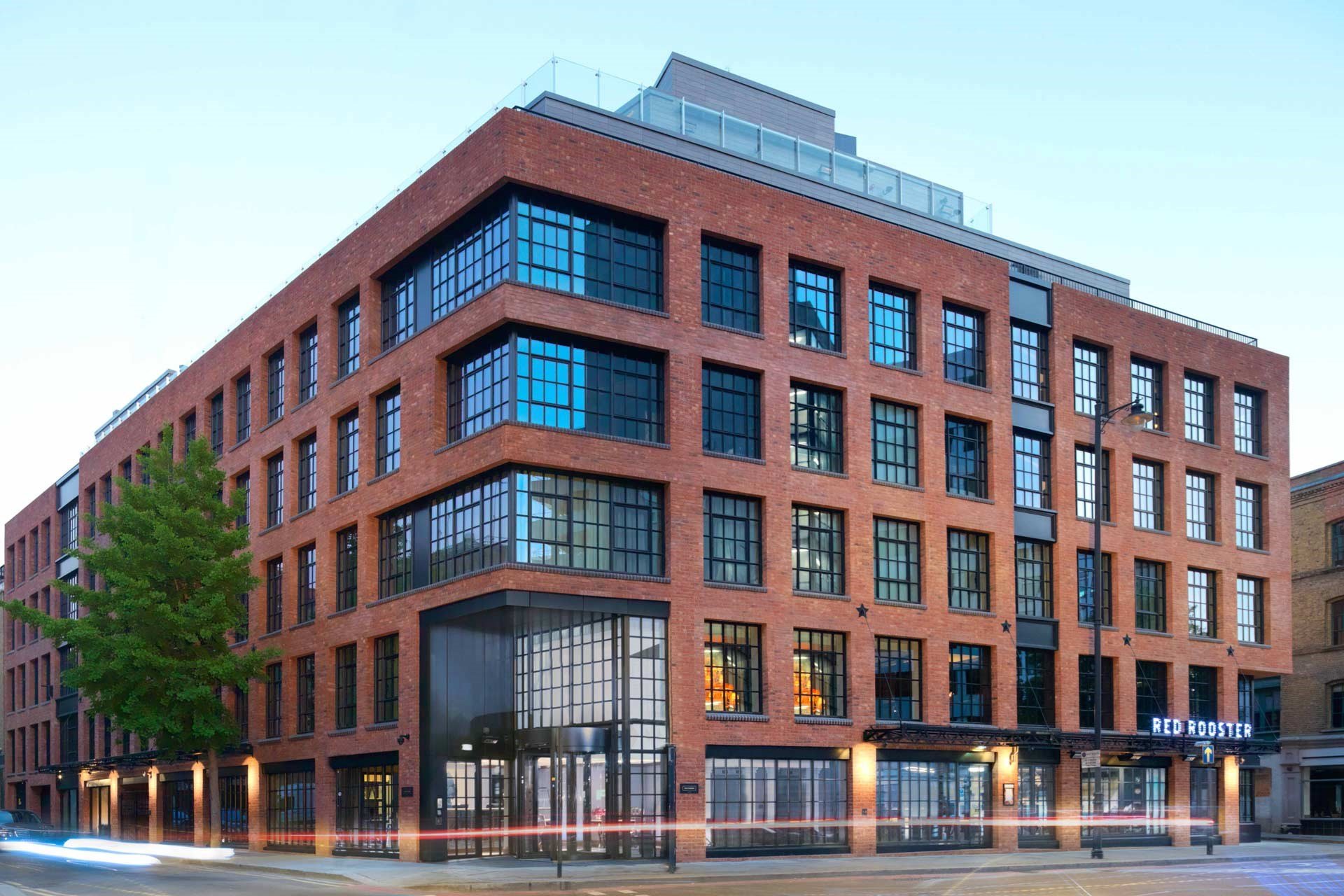 More often than not, you’re going in blind.

And yet it’s in East London-based The Curtain that you’ll be greeted with a rooftop pool, 24-hour gym, and spa, not to mention the Barack Obama-approved Harlem restaurant Red Rooster, every time.

You’ll find it down in Shoreditch, which means you’ll have Brick Lane and all its delights on your doorstep. You can walk around and take touristy photos (ironically, of course) in front of walls plastered in graffiti, browse vintage shops, or pick from one of the many famed bagel shops or curry houses on offer. Independent cinemas Rich Mix and The Electric are just down the road, or if ping pong’s your thing, you’re right around the corner from Bounce. Thursday through Sunday, Old Spitalfields Market fills up with stalls hawking vintage and antique collectables, alongside street food traders including the likes of Monty’s Deli and Breddos Tacos. And Sunday mornings should be spent at the bustling Columbia Road Flower Market before browsing bric-a-brac at the Old Truman Brewery.

There’s also cocktail bars a plenty – some of the best in London in fact. Happiness Forgets is anything but forgettable, or if you don’t mind a small walk there’s the Discount Suit Company (try the Mi Casa of mezcal, bergamot aperitivo, fino sherry, agave, apple and lemon). If it’s a fancy occasion – or you just really like panoramic views – there’s Duck and Waffle and Sushisamba, perched on the 52nd floor of Heron Tower. And finally, if it’s just a cosy London pub you’re after, The Well and Bucket deserves a mention for its artfully shabby-chic surroundings and excellent seafood.

The rooms have a warehouse feel to them, although in the most luxurious of ways. We’re talking exposed brick walls and hardwood flooring, with plump, stark-white, king-sized beds, leather chesterfields, and at times free-standing baths. They range from regular doubles to huge suites (one with its own living room, dining room and kitchen), and are all kitted out with the same fancy electronics like high-speed internet and Bluetooth-enabled Marshall Speakers.

There’s plenty beyond the rooms too. For starters there’s a heated rooftop pool (exclusive to Members and hotel guests), and a fully-equipped gym open 24 hours, offering running regular exercise classes including yoga and circuit training. Alternatively, if you’re after a slightly more relaxing time there’s a subterranean spa serving up everything from massages to manicures, as well as haircuts, wet shaves, and facials for the boys.

In the basement, there’s a members-only workspace. Beauty and the Beast comes to mind, with its huge dripping church candles, and walls of roses vibe. There’s also Billy’s Bar, offering up a genuine Banksy in the form of a police officer in riot gear (with an acid-house yellow smiley in place of the face and white wings on its back) – and booze of course; plus a music venue which plays host to a whole load of secret gigs.

After which, it’s curtains.

NOTE: Double rooms at The Curtain start from £230 a night. You can read more and book on their website HERE.

Looking for hotels in the city? Check out our excellent guide to London’s best boutique hotels

A beautiful pub and restaurant with rooms...

A four-storey, modern-day gin palace with 3 bars, 3 hotel rooms, a distillery, a museum and a place to blend your own gin. And als...

Built for movie stars, perfect for you....

The Best Hotels In Shoreditch

From boutique rooms to luxe aparthotels…...