BBQ Dreamz have had quite a ride.

Collectively, they’re made up of Filipino-born Lee Johnson & his partner Sinead Campbell. In 2014 they decided to open a Filipino street food stall, were spotted by the BBC, thrown into the fiercely competitive show My Million Pound Menu (which they won, securing a tidy 350k in funding), held a pop up in MeatLiquor serving – of all things – a ten-course tasting menu, opened their own restaurant in Bethnal Green aaand finally settled down in Kerb’s Seven Dials Market.

It’s set up in a little corner of the banana warehouse-turned-street food hall, and despite being part of a much bigger place it still has its own unique atmosphere. The space is filled with pot plants, posterised artwork wrapping the walls, and bamboo cane stools pulled up at the dining counter facing the open kitchen. 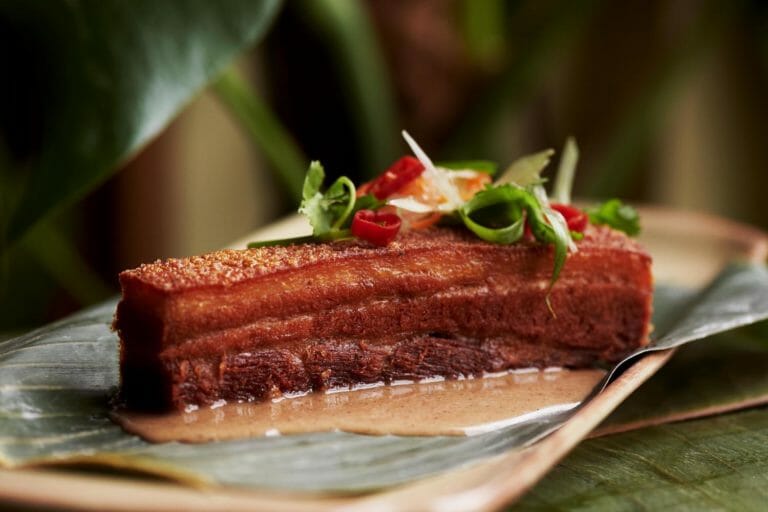 The menu shows off the BBQ Dreamz hits they’ve perfected over the years, including their famed, crispy-yet-meltingly good Lechon Kawali, which is pork belly that’s been marinaded in cider vinegar & star anise for 24 hours before being deep-fried, and served with a radish & coriander salad. You’ll also find their zingy adobo-glazed cauliflower; and their rich satay curry with either chicken or aubergine. The star order, though, is the sharing feast: 1kg of crisped up sous-vide pork hock and specifically 24 steamed potatoes.

Filipino cooking has a rich history when it comes to sweet treats, and you’ll find a daily changing dessert list here, which might include the likes of banana & cinnamon spring rolls or purple yam ice cream. The drinks list is kept fairly simple, with a pair of cocktails including a Calamansi Collins made with the calamansi fruit (it’s a citrus hybrid ubiquitous in Filipino cuisine) as well as some export-strength Filipino beer.

It’s the stuff that Dreamz are made of.

NOTE: Bong Bong’s Manila Kanteen is open for lunch and dinner Mon-Sat, plus 12-5pm on Sundays. You can find out more and book a table HERE.

Looking for a good wine bar nearby? The Barbary Next Door is right around the corner…