All hail the Taco Queen.

Her reign of the semi-casual Mexican street food scene on Peckham’s Rye Lane began in 2017, shortly after the universe collectively decided that the burnt out husk of the street’s fire-damaged former Greggs would be better served as a taco joint.

And, not to besmirch the good name of burned out husks of fire-damaged former Greggs, but my goodness was it an improvement.

The space is understandably quite small, with a narrow sleeve of seating running alongside an open kitchen. It’s all pretty light, simple, and casual, and somehow gives off the vibe that you could either pop in for a five minute snatch-and-grab meal, or linger for hours on an extremely fun date. And in all likelihood, you’ll want to do both. 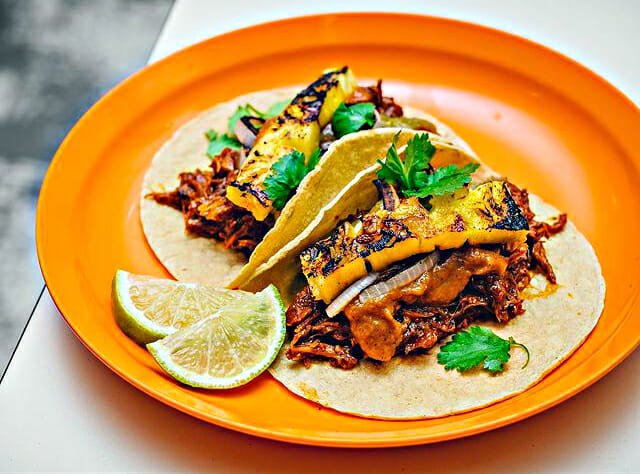 The tacos cover the classics – crisp, Baja-style fish with chipotle mayo, mango and cucumber; succulent buttermilk fried chicken with charred spring onion & jalapeño aioli; and slow-cooked steak & oxtail with onions & tomatillo salsa. But this being the 2020s, the place also pours a lot of time and effort into their vegan offerings too – things like aubergine & toasted pumpkin seeds tacos, or jackfruit nachos with cashew cream & guac, both of which pull in consistently rave reviews.

The cocktails lean heavily towards the Mexican side of things too, with smokey margs, spiced Palomas, mezcal Manhattans, and something they call ‘Pink Drink’ which involves ginger liqueur, hibiscus, and lime. But where things get really interesting is the beers – they’ve imported Mexican craft like an unpasteurised porter from Loba Negra, and a sour tamarind beer that basically acts like a pre-brewed michelada. You’re unlikely to find them anywhere else in town, and they’re ridiculously good.

And to finish it all off? They naturally serve the tacos of the dessert world: ice cream sandwiches. They come from Happy Endings (an East London stalwart) and they include the aptly named The Favourite (malted chocolate bourbon ice cream, thank you) as well as a stupendously good, all-vegan number with corn & cashew ‘vice cream’ dipped in smokey salted caramel, and wedged between two corn & miso cookies.

All in all, it all makes for a meal fit for royalty.

NOTE: Taco Queen is open Tuesday – Sunday. You can find out more, book, and see the full menu at their website right HERE.

Like tacos? Take a look at our guide to the best tacos in London