Born in Dayton, Ohio in the late 19th century, the Wright Brothers – Orville and Wilbur – were a couple of high school dropouts who invented a printing press, launched a daily newspaper and opened a bicycle repair shop before going on to become the true pioneers of modern aviation, astonishing engineers the world over by building and flying the first ever fixed-wing aeroplane.

But despite all this, they notably failed to even attempt running a successful seafood restaurant in Soho.

So it’s fallen to another set of Wright Brothers to take up the mantle and launch what has now become a small empire of fish-focussed restaurants around London, casting their net as wide as Spitalfields, Battersea and South Kensington. The two brothers-in-law started out as seafood suppliers after tasting some literally life-changing oysters in France, and it’s since blossomed into a fully-fledged restaurant business where they serve their own hand-sourced seafood in a non-stuffy, totally accessible way.

You’ll find their Soho branch on Kingly Street, just behind the crowds of Carnaby Street. Moody and spacious, the main dining area’s lined with velvety green banquettes and dark walls adorned with just the right amount of tasteful maritime paraphernalia – clamshell sconces, ships’ signal lamps and vintage maps. Nestled within the open kitchen below is a theatrical private dining room, housed inside a giant lobster cage. 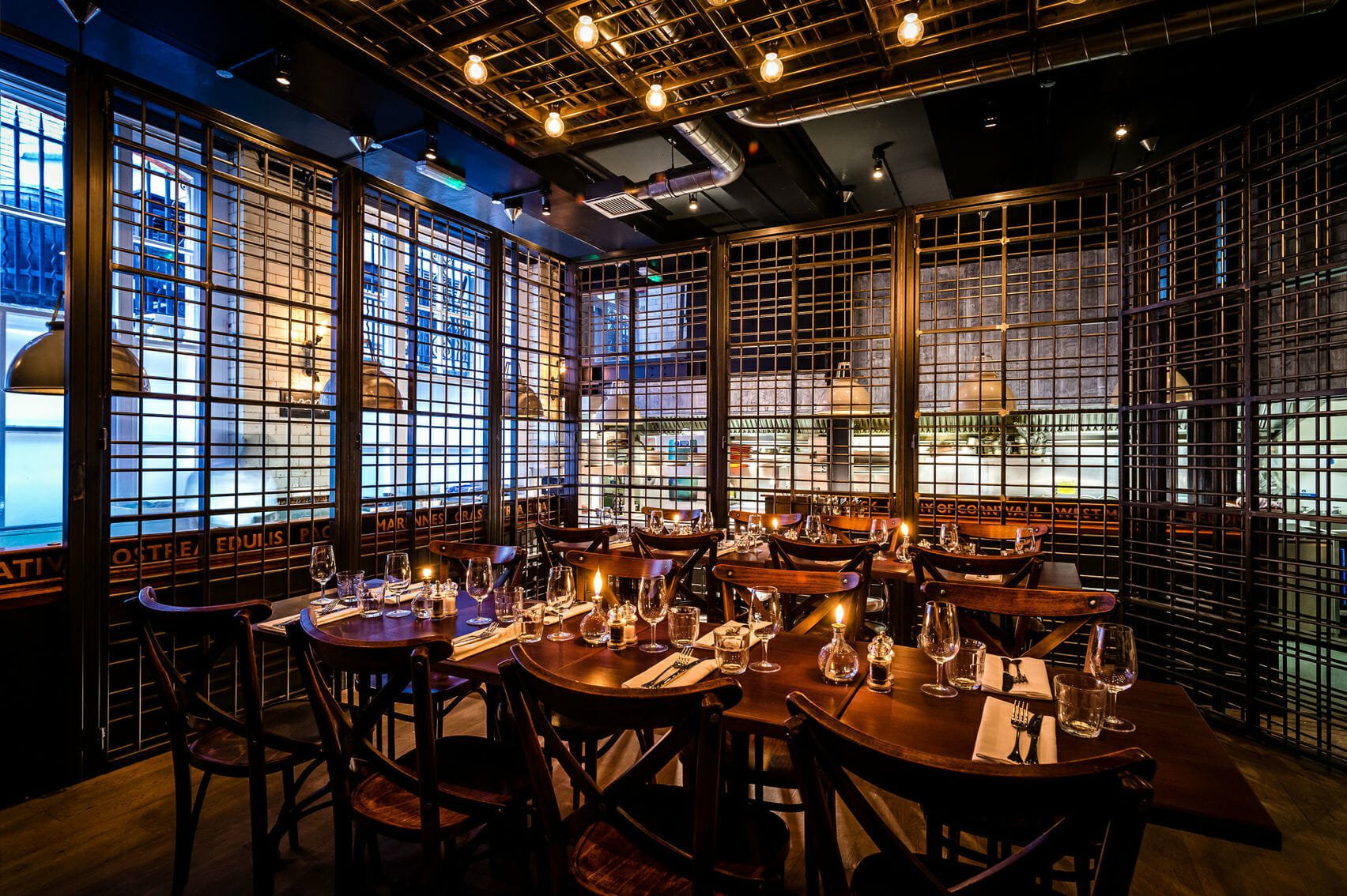 The chefs outside will be busy prepping whatever’s fresh off the boats that day, alongside the stalwarts of their menu. Naturally, there’s oysters (which go for £1 a pop every day between 3 and 6pm), sourced from six different farms, and build-your-own platters loaded with king prawns, whelks, cockles, and whole Devon cock crabs. But the cooked dishes are what set the Wright Brothers apart. Arranged in small plates, so that you can get as wide a range of flavours as possible, there’s mussels in Sassy cider with bacon; tuna & ‘Nduja toast with rocket and capers; Galician octopus perched on celeriac purée; ink-braised cuttlefish; and a couple of vegetarian dishes for anyone who’s wandered in and been caught unawares in a fish restaurant.

But if you’re not inclined to share, there’s big solo mains, too – from fish and chips made with the catch of the day, to 8oz ribeyes and whole cooked fish. And of course, you can’t leave without trying the gingerbread pudding with caramel sauce.

It’s got to be the Wright Brothers’ most important invention.

Looking for a nightcap? Get into Disrepute.