Let’s all raise a mint julep to Kansas Smitty’s.

A subterranean jazz bar inspired by the swinging, hedonistic atmosphere of Kansas (a city which not only ignored Prohibition, but was also – much more importantly – home to Dorothy from The Wizard Of Oz), this is where you’ll be heading the next time you fancy a potent cocktail of bourbon and live jazz.

Thanks to regular appearances at places like Ronnie Scott’s, 606 and Nightjar, the Kansas Smitty’s house band have become well-loved enough to take this rare step of opening up their own place. And it’s a step which should by rewarded…

… by you, visiting them. 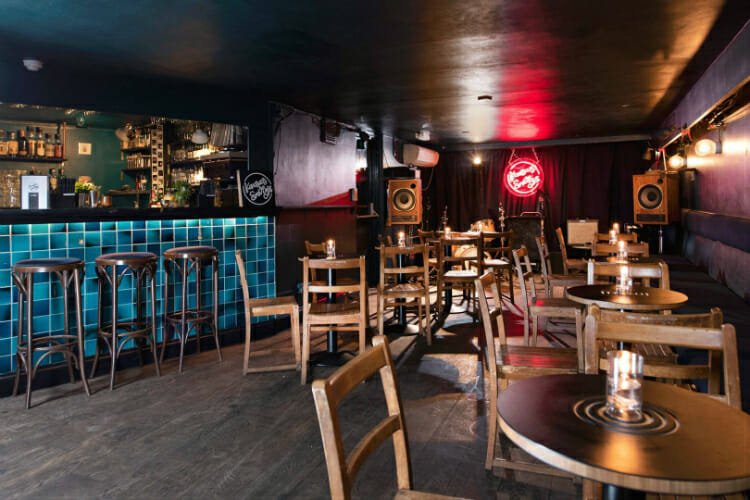 Do that and you’ll uncover an illicit, underground bar that’s unlikely to be featured in The World Of Interiors any time soon. But that’s ok, because what it lacks in pretty fixtures and fittings, it more than makes up for with strong drinks – starring a collection of bourbon juleps designed by Sean Fennelly of Milk & Honey – and great music.

And the music is what this place is really about. You see, it’s an authentic homage to the love of good jazz; it’s a tribute to the Kansas City anti-prohibition Bebop scene, where the only things that mattered were having musicians willing to play and people willing to listen; it’s a salute to the inebriating power of good music!

NOTE: Kansas Smitty’s is in the basement of ‘Off Broadway’ cocktail bar on Broadway Market, Bethnal Green. It’s open Tuesday – Sunday, 7pm-12am: you can book tickets on their website right HERE.

Like drinks and music? Check out the best London Bars With Live Music