The Best Notting Hill Restaurants | Notting But The Best…

We’ve eaten the gourmet burgers. We’ve drunk the bellinis. We’ve extensively tracked the movements of the yummy mummy brigade. It’s probably been the most gruelling restaurant research of all time (probably). And so, behold the best Notting Hill restaurants:
– 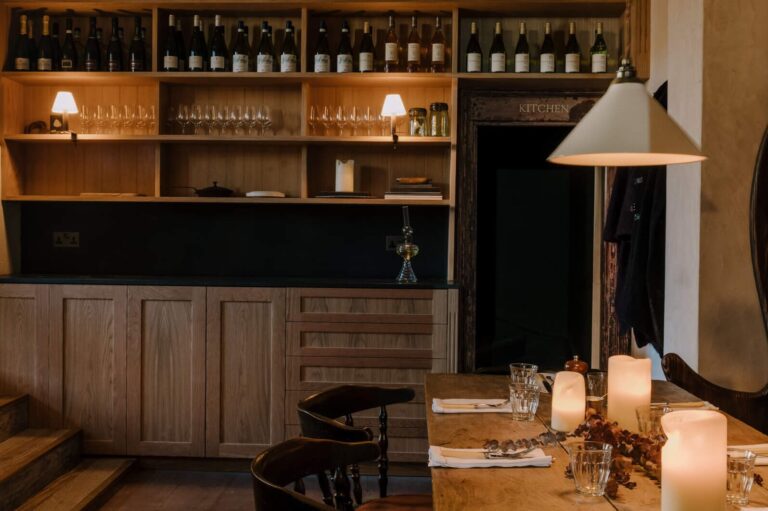 The Pelican is a beautifully revamped neighbourhood pub just off Portobello Road that just so happens to have chef Owen Kenworthy at the helm, who was head chef at the critically acclaimed Brawn for five years. He’s brought his nose-to-tail philosophy with him for his latest venture, where he’s cooking up small plates and hearty fare like spider crab on toast; monkfish pie with lobster head gravy; and scorched leeks with crispy shallots… 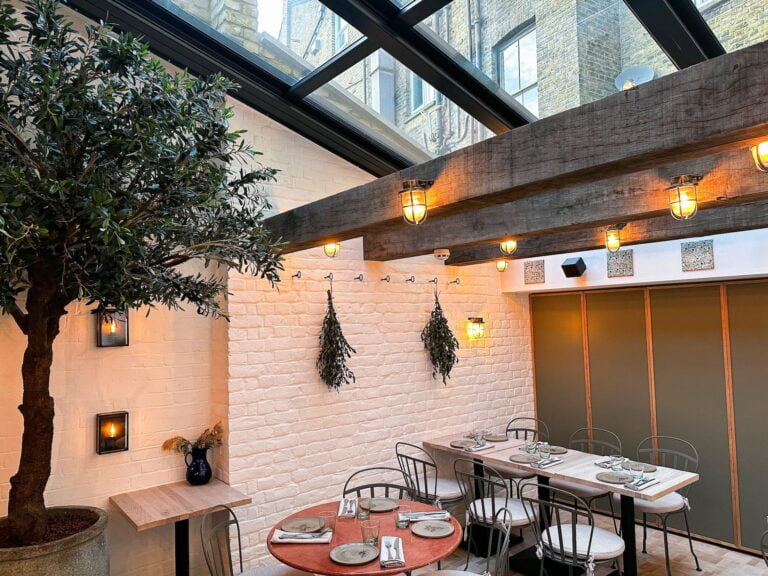 There is already a Palestinian restaurant in Notting Hill, Maramia, so Akub can’t claim first in the neighbourhood; instead it will just have to settle for being an incredibly good restaurant in Notting Hill. Ah well. It comes from Bethlehem-born chef Fadi Kattan and from his menu you can share (maybe share) beautifully-presented modern Palestinian dishes like shish barak (spiced squash dumplings) with beetroot tahini and slow-cooked beef with garlic yoghurt and pomegranates – all washed down with Middle-Eastern cocktails – in a placid, earth-toned dining room that’s fitted with an actual olive tree. 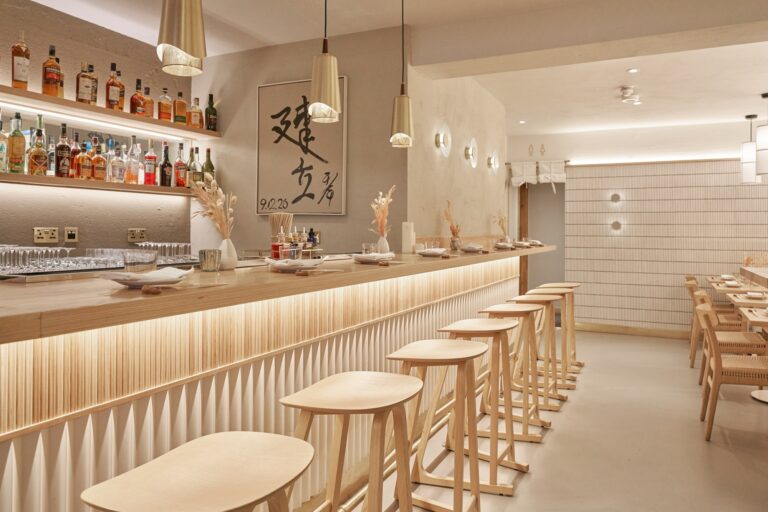 SUMI is the second venture from sushi master Endo Kazutoshi – the sister to Endo at Rotunda, his Michelin-starred knockout in Shepherd’s Bush. This time however he’s gone for something a little more neighbourhood friendly, somewhere that you can imagine taking a relaxed first date – or a 91st – and both leaving thoroughly impressed. It’s got a sort of effortless elegance to it – everything from the Nordic-Japanese design, to their signature, Japanese-leaning cocktails. And of course the food. Stand out dishes include bright, colourful bowls of iced sashimi, their hand-rolled temaki and their salmon teriyaki. It’s not cheap, but then true quality rarely is. And it’s worth it…even if you do eat beans for the rest of the week. 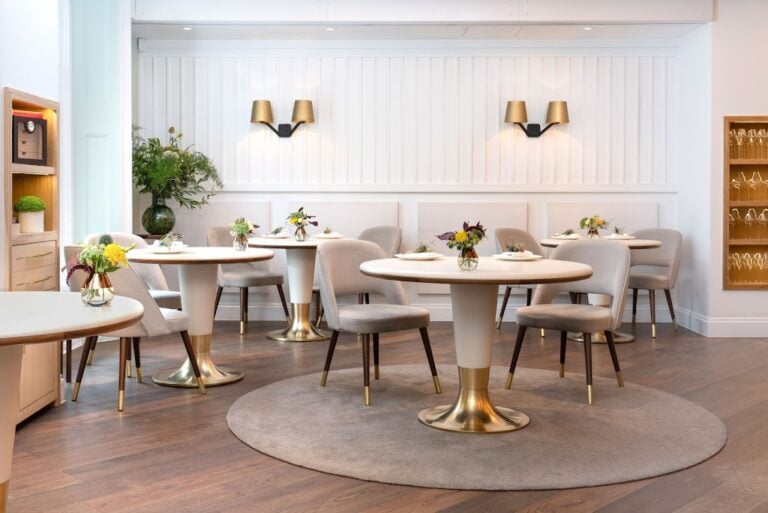 Sleek, sophisticated, and set around a huge kitchen separated only by a glass wall, Core by Clare Smyth is the debut restaurant from the superb chef who maintained Restaurant Gordon Ramsay‘s three Michelin stars for four years (the first female chef in the UK to do so), and was recently named Best Female Chef in the World. So to say the food here is good is an understatement. Her trio of tasting menus has won critical acclaim – and a casual debut two stars in the Michelin guide, followed by a third not long after, joining her old boss in that elite tier of three Michelin star restaurants in London. 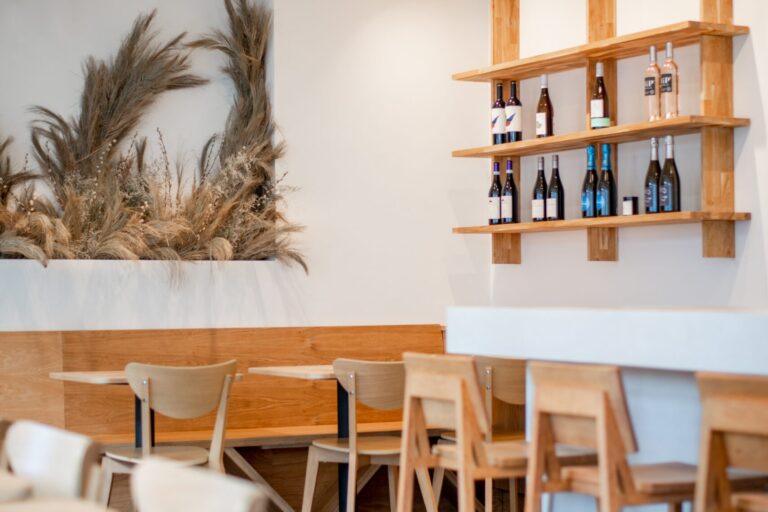 Itsy Notting Hill cafe Kuro Coffee leaves a strong impression on all its regulars – see Andrianos Poulis for example (a former chef at Hackney’s Cornerstone, one of the top Michelin star restaurants in London). When asked, he gladly accepted the head chef role at Kuro’s restaurant from across the road – a minimalist cream and pale wood-coloured space called Kuro Eatery – and in return, he’s put together a pretty special menu of Mediterranean and Japanese ​​interlaced dishes like tagliatelle with egg yolk and crispy pork granules; and giant pork chop smothered in chilli pork fat and aged soy sauce. 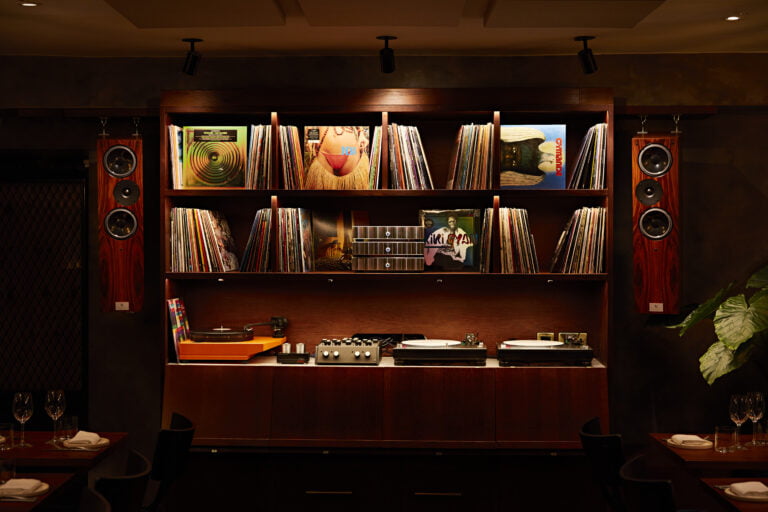 Caia on Golborne Road, from the guys behind Kiln and The Fat Duck, is a three-in-one: a fancy wine bar, an intimate music venue, and best of all, a heavenly open fire restaurant. Serving up a mix of vibrant small and large plates, you’ll certainly leave with your belly feeling satisfied. Oh, and did we mention there’s a Kuzma R record player with Auditorium R-25 speakers to get your groove on after dinner? 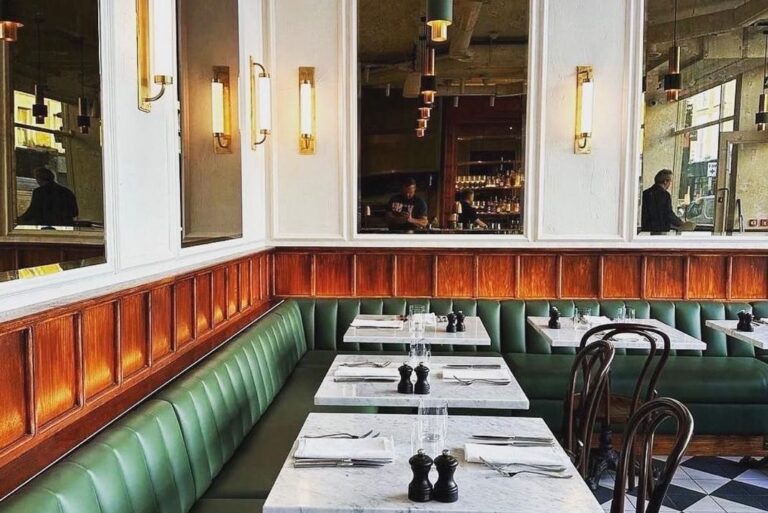 Designed to feel like a laid-back bistro and overflowing with atmosphere, Dorian is a neighbourhood-style restaurant in Notting Hill that even non-locals should flock to get to. A stellar team (whose collective CV includes big hitters like Core by Clare Smyth and Ikoyi) puts together a produce-led seasonal menu of meaty game and fresh seafood, bolstered by pitch-perfect starters and veg on the side. And the drinks list isn’t just an afterthought – wine comes from Noble Rot suppliers, while the botanical cocktails provide the perfect aperitif. Straker’s is a laid-back Anglo-Italian restaurant brought to you by the guy that gets over a million views on his TikTok cooking videos, Thomas Straker. And he hasn’t just blown up on social media from luck, he’s worked at his fair share of renowned restaurants, like Elystan Street and Dinner by Heston. Head on down to Golborne Road and get into some top-notch, hearty food: menu big-hitters include scallops and burnt chilli butter with puffy flatbread, and ex-dairy sirloin steak served on the bone. 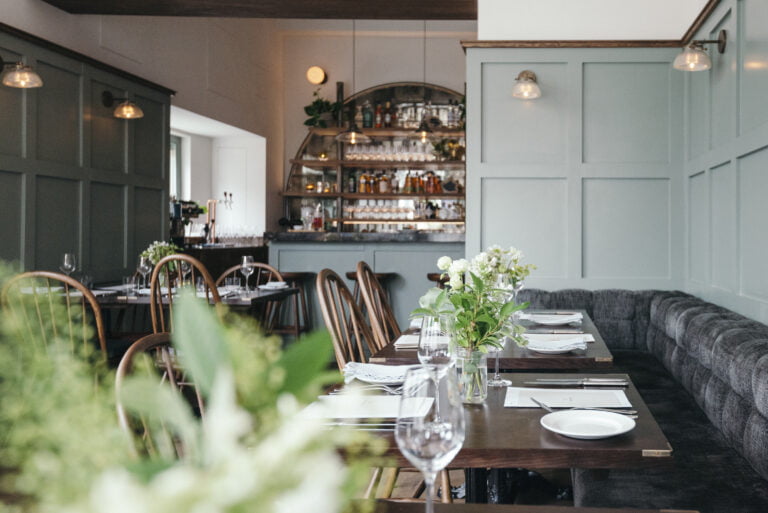 7 Saints has built up a lot of good grace in the neighbourhood for its seasonally-motivated menu (crafted by Adam Parker, another Brawn alum) that changes on a weekly basis, split between four starters, four mains and four desserts; with dishes skirting between the likes of kelp-cured trout with sour cream and bits of beer batter to cider glazed pig’s cheek, plus a healthy turnover of tarts (cherry and almond, salted chocolate and honeycomb, you name it). One item that you can always put your money on being here is their whiskey and brown bread ice cream. It would be a whiskey move to leave that one off… 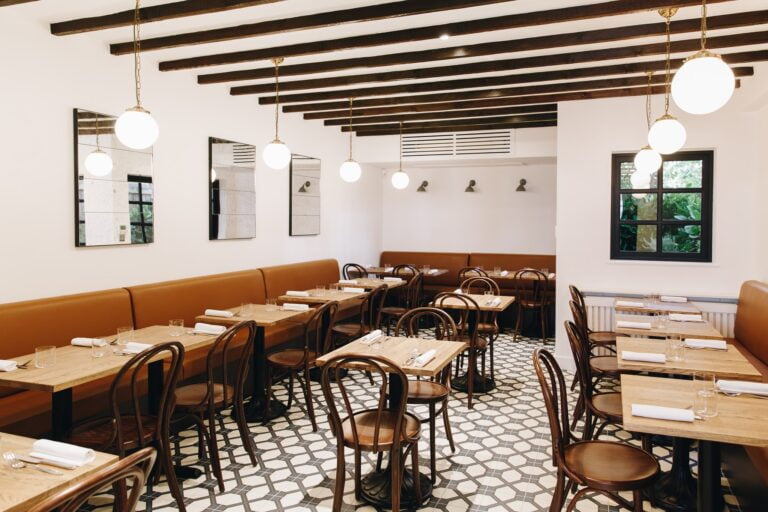 From the team behind other local gem Mazi, Suzi Tros is an airy eatery focussing on Northern Greek cuisine. You’ll find all your favourite holiday dishes here, but refined and elevated a couple of notches almost to the point of fine dining (though in thoroughly relaxed surrounds). There’s Greek salad given extra crunch with Cretan rusks; gyro “tacos” with BBQ pork belly; braised octopus with kalamata olive cream; and Greek coffee profiteroles to finish, which it would be criminal to miss. 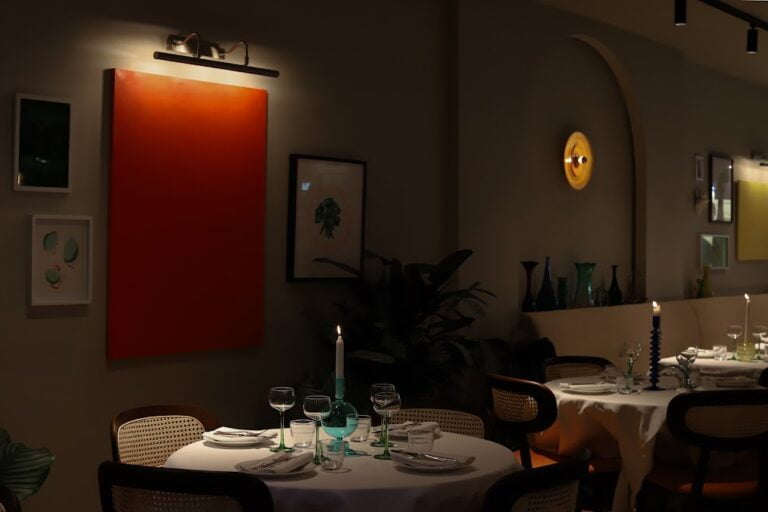 Former Suzi Tros chef John Skotidas has sprung from one of Notting Hill’s best restaurants to another: at Zephyr he’s plating up Mediterranean treasures like wild red prawn with sundried tomato; whole grilled sea bass; and spiced lamb cutlets to share. It’s warm and buzzy in here, and the bifold doors are pulled back in summer to give the whole place a laid-back, holiday feel. And since you’re on holiday, you should probably check out the basement cocktail bar, Naked and Famous (one of our favourite tequila bars in London), too… 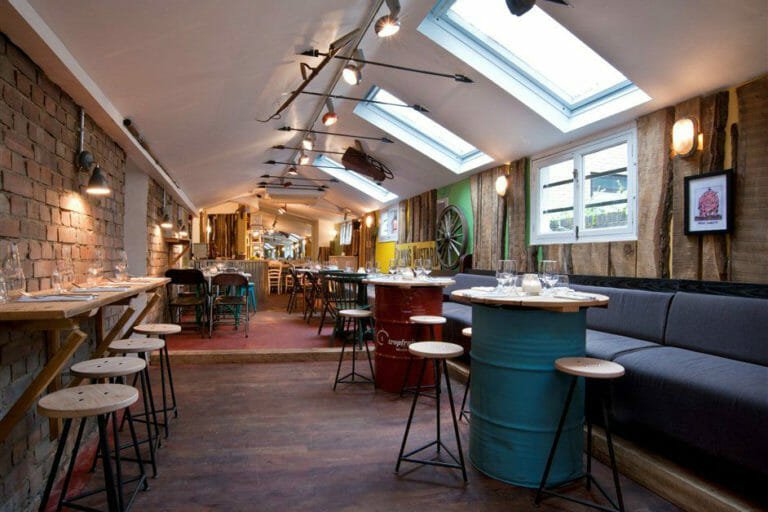 The roots of The Shed lie firmly in rural Nutbourne, Sussex… which means they’ve grown an impressive 45 miles in length… from the idyllic farm and vineyard where the Gladwin brothers grew up, and now source a bumper selection of the English countryside’s finest ingredients.

As farmer, chef and restaurant man respectively, they’ve formed the perfect family food cycle: from farm to table – via the kitchen, of course – where Oliver turns already delicious things into delicious-er things like lamb chops with lemon, parsley and harissa. And they’re remembering those roots with a heavy dose of farm decor – expect reclaimed tractor parts, oil drum tables and portraits of cows. 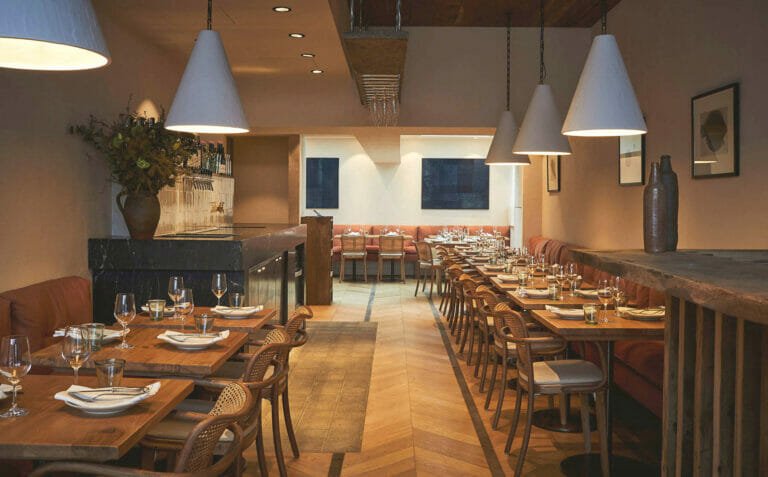 Orasay, brought to you by chef heavyweight Jackson Boxer (Brunswick House, St Leonards), Orasay is a polished neighbourhood eatery inspired by the Outer Hebrides, where Boxer spent family holidays as a child. That means well-sourced and exquisitely prepared seafood like grilled white-legged prawns with miso butter & kumquat; aged chalk-stream trout with green apple and smoked yoghurt; and an oyster happy hour every day at 5pm. For drinks, expect twists on classics like the blood orange and chilli Negroni, or explore the mostly European list designed to compliment the food – including bottles from Jacksons’ own personal collection. Just ask for the black book… 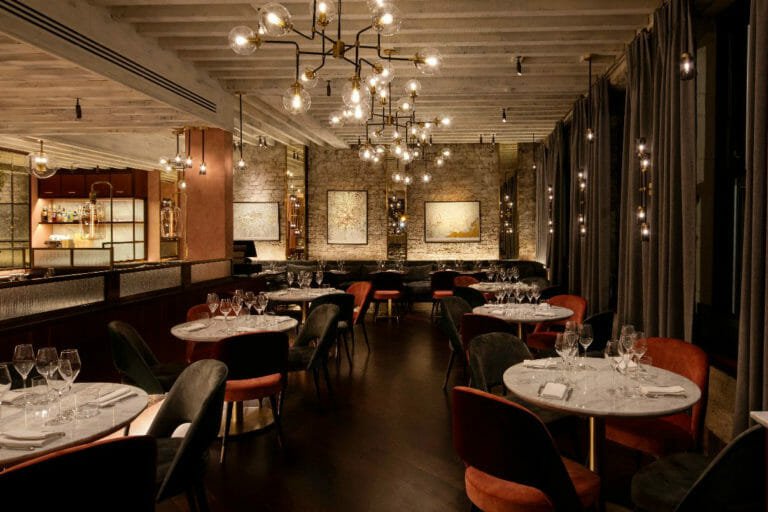 Caractère is a Notting Hill restaurant courtesy of Emily Roux and her husband Diego Ferrari — Roux of course being the daughter of Michel Roux Jr., the two-star Michelin chef still heading up Le Gavroche; and the grand-daughter of Albert Roux OBE, also of Le Gavroche, before his son took over. No pressure, then. Together they’ve crafted a Franco-Italian menu that draws from each of their families’ heritage, featuring dishes like celeriac cacio e pepe; wild turbot with black garlic & liquorice; and slow-cooked cuttlefish with potato gnoccho — all served in the comfort of their chic yet friendly restaurant just off Westbourne Park Road. 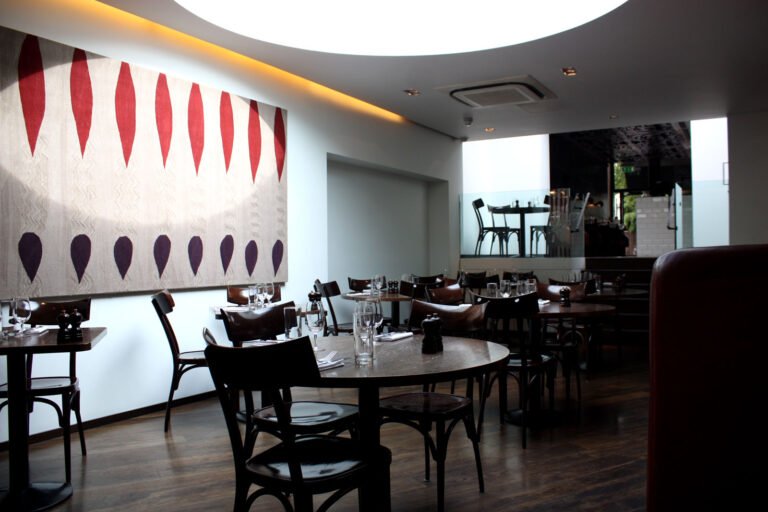 Want to upgrade your Sunday roast? Head to Hereford Road, where ex-St. John Bread and Wine chef Tom Pemberton reprises the nose-to-tail cuisine of his alma mater with a more neighbourhood-friendly price-tag. The £20 set lunch changes regularly with the seasons, featuring numbers like duck livers with spinach & tarragon (or, for the less offal-inclined, hake with cucumber & kohlrabi). And on weekends? Expect that meaty expertise to be applied to some of the finest roast chicken, beef & pork in town. 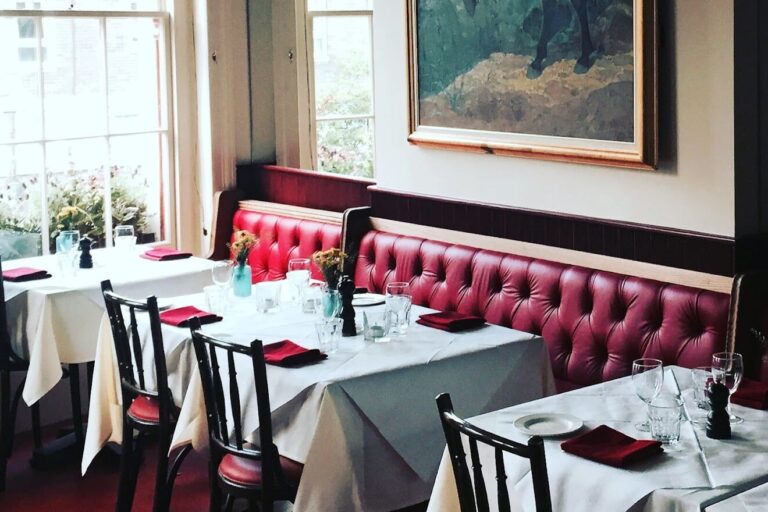 The Cow: a Notting Hill institution, beloved by celebrities but more importantly, people with tastebuds. Downstairs is a traditional pub that’s barely changed in the almost 30 years its been open (except for the addition of a mad Paul Slater mural). Upstairs is a crisp table-clothed dining room serving up exceptional, old-school British gastro fare, from Sunday roasts to platters of shellfish, best enjoyed with a cold pint of Guinness. 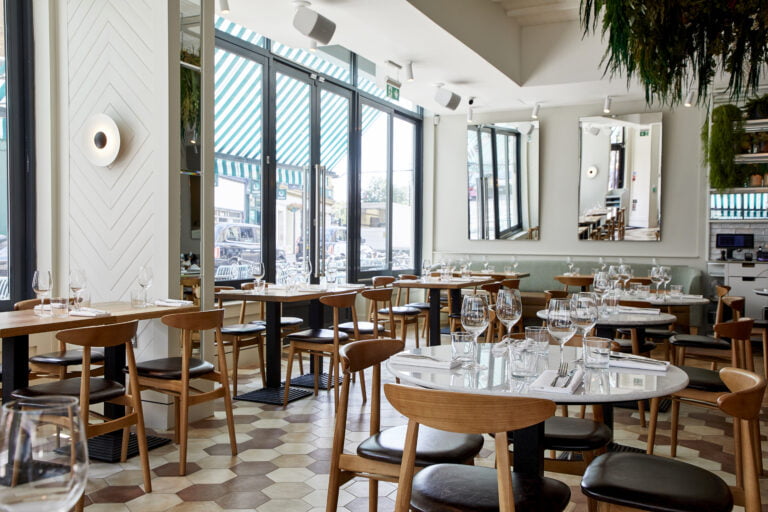 No offence to Saturday, but Sunday In Brooklyn (in Notting Hill) is the winner. The star dish at this brunch spot is the malted pancakes, covered in their signature hazelnut maple praline sauce. And to back them up, you can score some smoked salmon on brioche, a classic shakshuka, a zingy beetroot salad, and much more besides… 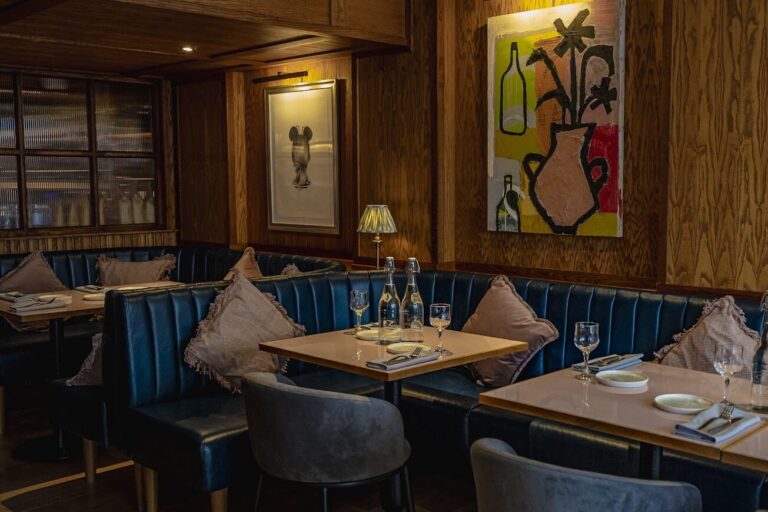 Recently opened on Westbourne Grove, The Residency has a members’ club feel without the subscription fee. Enveloped in warm wood, it’s an all day bar and restaurant with food overseen by Carniel Francis (previously of Bentley’s and Berner’s Tavern), who’s created a mouth-watering Euro-Caribbean menu that celebrates Notting Hill’s diverse cultural heritage. Add in a decent line of cocktails and DJs at weekends, and you’ve got plenty reasons to take up residence. Beam is warm, it’s stylish, and of all the Notting Hill Restaurants, it might just serve the meanest brunch (maybe). Family-run, it started out up in Crouch End and has since spawned two siblings to cope with the lengthy queues that form outside each weekend. The secret to their success? (And earning a spot on our ultimate London brunch guide). Nailing classics like breakfast burritos, salmon & scrambled eggs and berry, banana & salted caramel French toast… but also peppering the menu with dishes drawing on their Middle Eastern heritage, with shakshuka, Turkish eggs, and a superlative take on eggs Benedict that involves shawarma spiced patties, pickled red cabbage & harissa hollandaise.


Looking for more inspiration? Check out all our local recommendations in your Notting Hill neighbourhood guide…