The Best Indian Restaurants in London | The Nudge London

Indian restaurants are the perfect spot for a first date.

Must be all that pilau talk.

So we’ve put together a modest selection of our favourite Indian restaurants in London, from Michelin starred showstoppers to cosy home-style eateries. Based on our usual strict criteria of taste, atmosphere, service and a little je ne sais quoi; these are the best… 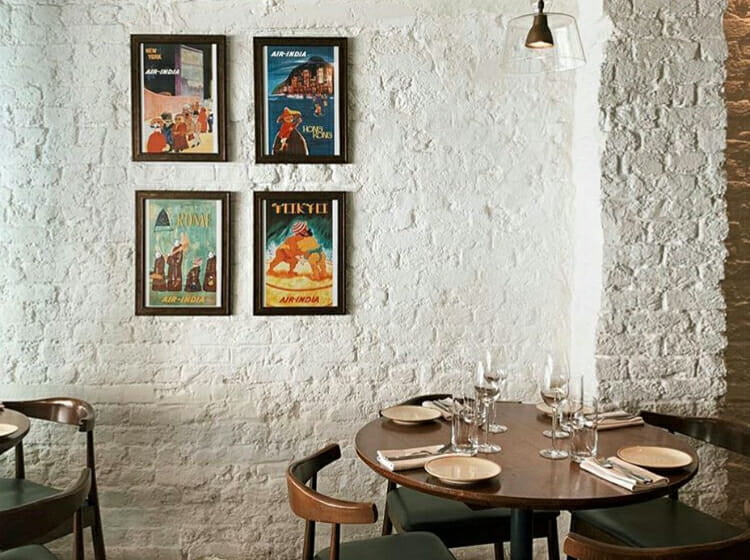 Specialising in Indian seafood, Trishna offers an aquarium’s worth of creatures steamed, seared, grilled, and tandoor scorched with a mouth watering array of flavours and spices. The earning of a Michelin star in 2012 is an indication that they’re doing something right, and the stylish and airy neighbourhood diner has been a big hit with the Marylebone village regulars over the past few years. As with most Michelin starred eateries it’s set menus that dominate, with a varying degree of price and produce, but they do offer an early evening menu and a “lunch bites” bill of fare for the more budget conscious. READ MORE 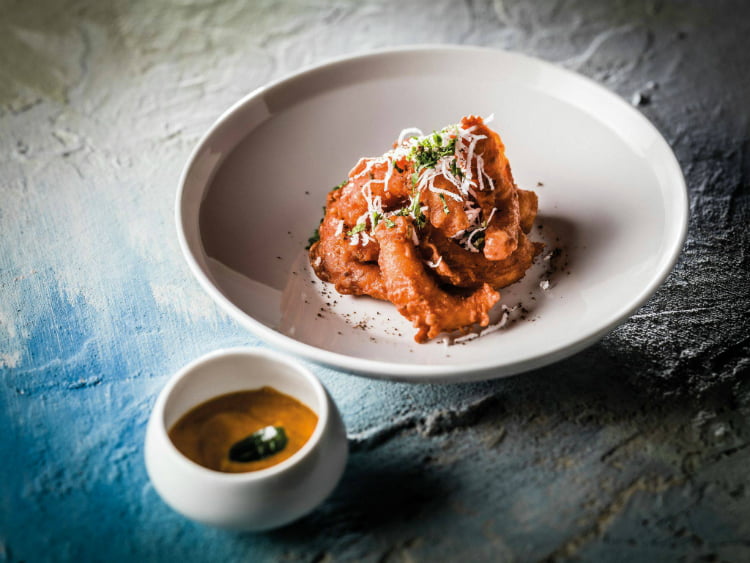 Kutir translates as a small cottage, which is at odds with its actual setting – a lavish townhouse in the heart of Chelsea. However, it’s inside, on your plate, where the rural influence can be found. Inspired by Indian wildlife lodges and the great feasts that would take place there, Kutir serves up traditional fare simply, and elegantly, to its diners. Chef Rohit Ghai (the first Indian chef to have been awarded a Michelin star in less than a year) has a seasonal menu which, predictably, changes with the weather but many of the staples will remain; Prawn Masala, Quail Naan, Sea Bass Kokum, and Guinea Fowl Biryani to name just a few. In addition to the à la carte you’re invited to take an expedition through the flavours of the country in one of three wine-paired tasting menus. To accompany your food there’s an extensive wine list and a host of sub-continental cocktails. You may be sat in a Georgian townhouse but your tastebuds will be telling you something different. READ MORE 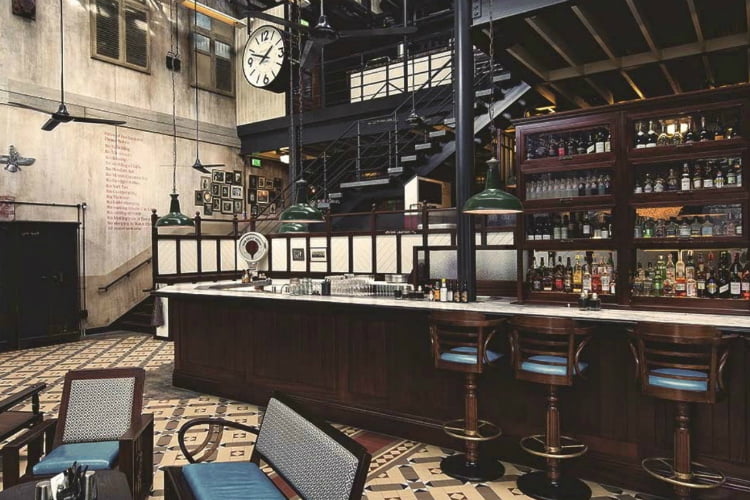 Inspired by the old Irani immigrant cafes of Bombay, Dishoom focuses on friendly, welcoming, and cosmopolitan cooking. That’s certainly the vibe you’ll get when you enter this popular micro-chain restaurant. Like the cafés they’re based on, everyone is welcome – and everyone wants to go, which often means long queues to get in. The wait is certainly worth it though as the sleek bentwood chairs, faded mirrors, and dark wooden interiors lined with vintage signs and photographs feel at once exotic and homely. You truly feel transported which is only helped by the food. Covering all the bases, you can expect delicious snacks alongside biryanis, masalas and dahls (the latter is a signature for them, marinated for 24hrs, and possibly, despite vigorous competition, the best lentil-based dish in London). The drinks menu is fun, serving up house favourites with an Indian twist alongside authentic staples like the communal Presidency Punch, an old East India Co. recipe that must be shared by a minimum of four people. They also do breakfast where bacon naan and masala beans make for a delightful alternative to the full English. READ MORE 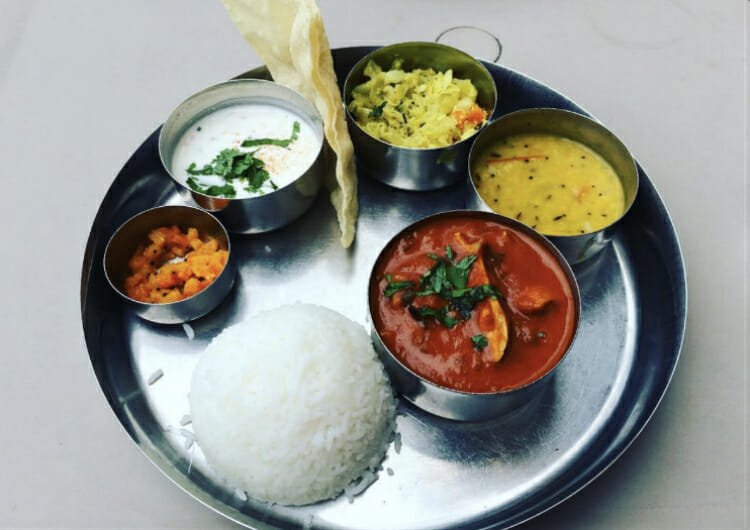 Ganapati is a south Indian kitchen in south London. After visiting and falling in love with the communal eating canteens of southern India, chef Claire Fisher set up Ganapati to bring some of that same colour and vibrancy to Peckham. The menu is small, focusing on thalis, (a platter of all the best bits on one tray – like your own personal curry clip show) and changes every two months. The cuisine of southern India has a community feel and Fisher has cultivated the same vibe in SE15. With supplies from Patel Brothers (one of the first Indian grocery shops in London), kitchenware from Little India, and local artists working on the design, Ganapati is a collaboration, a blend of flavours that come together to create the perfect dish. This theme extends beyond the kitchen, and when it’s not serving up supper Ganapati is home to exhibitions, classes, and events. READ MORE 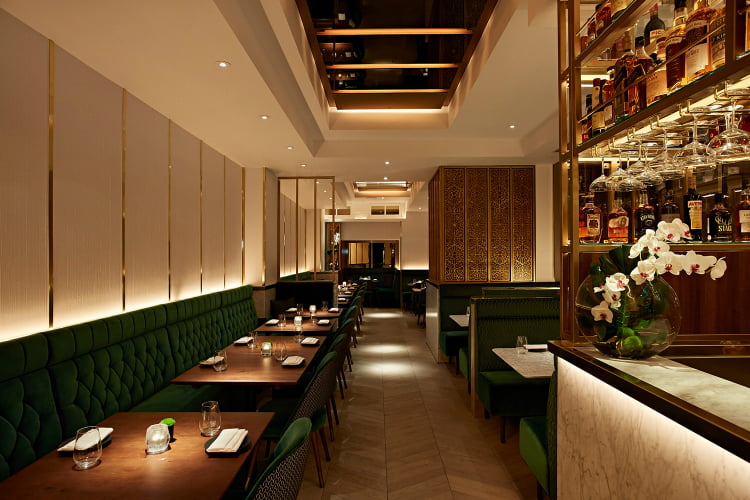 It’s Indian fine dining, which is exactly what you’d expect from a smart, Mayfair eatery. The menu looks to redefine high-end Indian cuisine, and creations like the Baked Paneer Pinwheel make for a memorable occasion. Indian Accent has branches in New York, New Dehli, and, of course, London with high accolades falling on all three. Chef Manish Mehrotra calls his cooking style “inventive Indian”, and what he cooks up here is certainly hard to find elsewhere. The tasting menu is the best way to discover something surprising but the à la carte will have you covered if you’re not the most adventurous. His penchant for the experimental extends to the drinks as well, where you’ll find a green chilli sour that’s sure to make a lasting impression. READ MORE 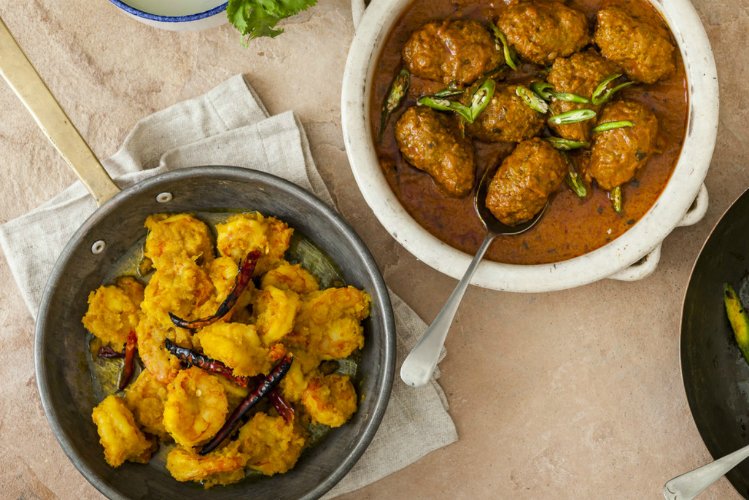 What started out as a supper club for someone wanting to share their family recipes has blossomed into one of London’s most popular Indian restaurants. Despite the rush that followed founder Asma Khan’s appearance on Chef’s Table, this Carnaby Street canteen is still doing its best to serve the queues of hungry diners hoping to taste some traditional Indian home cooking. The supper club vibe has not diminished as the restaurant has grown, and Khan can often be found roaming the aisles, serving dishes, clearing plates, and joking with the customers. It feels like a home, which is where it all began, and the all-female team of housewives who helped Asma in the early days still run the kitchen today. If you’re able to get a seat, a meal here is about as close as you’ll get to being invited into a Calcuttan home… on Carnaby Street. 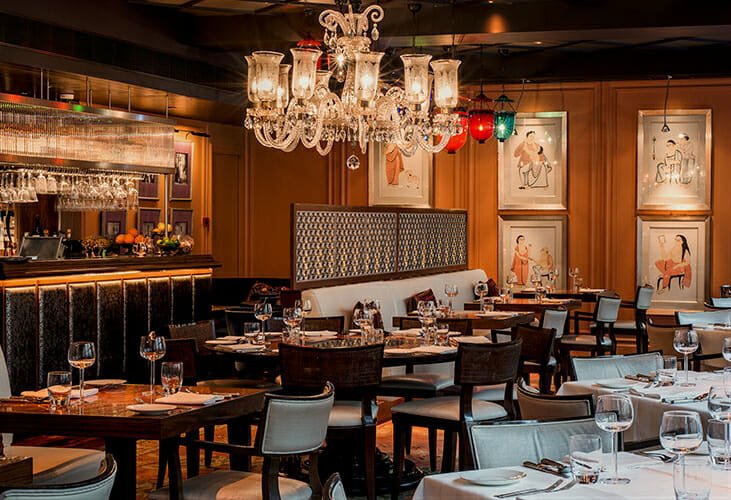 Not just London’s, but the UK’s longest-standing Indian restaurant, Veeraswamy has been serving the capital Indian cuisine since 1926. It’s housed on Regent Street, it’s designed to look like a Maharajah’s Palace, and it has a Michelin star. Basically, it’s fancy. With Venetian chandeliers alongside lanterns from Jaipur, everything about this London landmark is an elegant counterpoint between East and West. Over its many years of existence, it’s been a solid performer offering up an extensive menu of established, quintessentially Indian dishes – but alongside its staples sit a host of gourmet offerings which seek to impress and intrigue, like their Fresh Pineapple Curry, and Kerala-style Venison Scotch Egg. 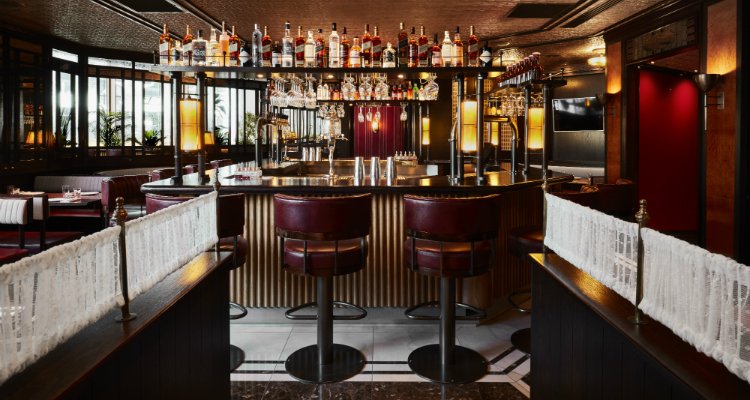 If you ever wanted to know what an army mess in India tasted like, then Brigadiers is the place for you. Focussing its fare on the different methods of Indian BBQ that soldiers would have dined on, you’ll find tandoors, charcoal grills, rotisseries, and wood ovens all cooking up a feast that might even fool you into thinking life in the army wouldn’t be so bad. They have an East London postcode, so brunch is obligatory and whilst it’s unlikely that the officers in India enjoyed curry-infused Bloody Maries and chilli cheese naans, you can. The bar flows full with beer and whiskey (one of the many rooms here features a whisky vending machine). Top billing are their indulgent feast menus which must be pre-ordered 48hrs in advance (usually for a minimum of 6 people) and allow you and your unit to work your way through a Wood Roasted Goan Suckling Pig, a Tandoori Tomahawk Steak with Lobster, or a Suckling Lamb Biryani with all the trimmings. 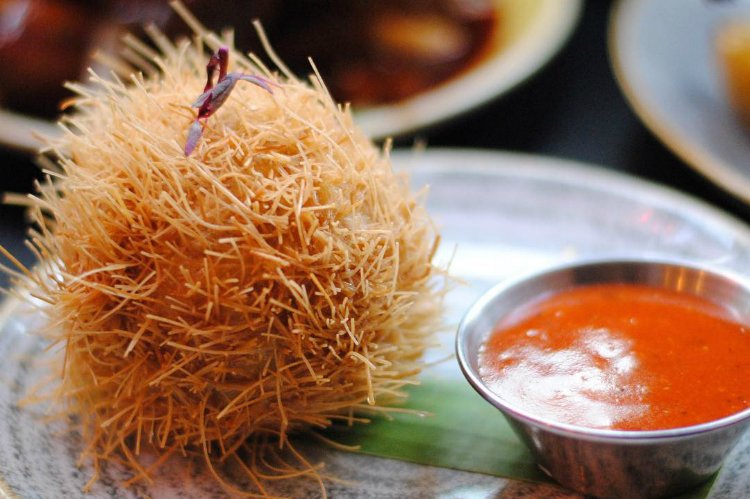 Another “home-style” Indian restaurant, Gunpowder is certainly the sort of home you’d want to visit. Prepped by a chef who cut his teeth at Tamarind, the menu is a kaleidoscopic collection of good, wholesome dishes. Wild Rabbit Pulao, Sigri Grilled Broccoli, and a hedgehog-like Venison and Vermicelli Donut all appear on a menu with cast of stand outs. The atmosphere is relaxed, with stool seating, a bar made out of old chair backs, and a chalkboard wall of specials, wines, and cocktails. Round the corner from Brick Lane, Gunpowder represents everything that street was once famed for; honest, mouth watering, Bengali cooking shared with a passion for what’s on the plate instead of profit. That said, whilst you get bang for your buck you’ll still have to spend a few. 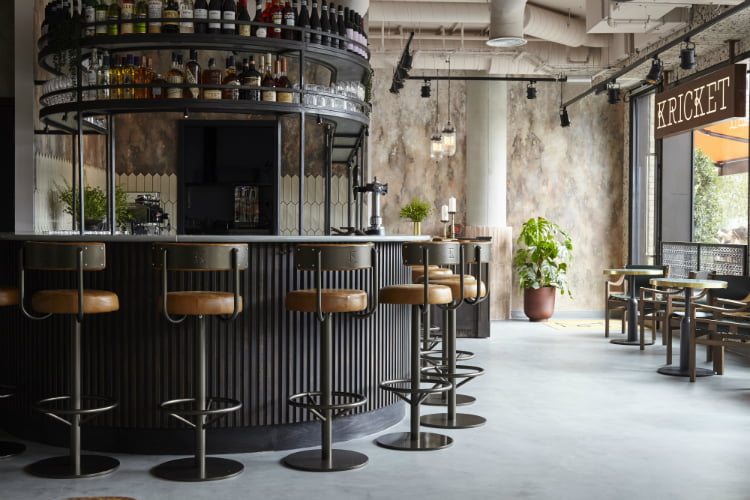 When you’re whipping up delicious street food and the people start crying out for more, you don’t shut up shop and pack it all in – that’s just not cricket. It’s not Kricket either who, in 2017, expanded on their popular pop-up in Brixton and opened a two floor restaurant in the heart of Soho. With another now in the BBC’s old television centre all three serve up the same modern, aromatic dishes inspired by India and supplied by Brits. Scallop Madras Curry, Coronation Smoked Mackerel, Bone Marrow Raita, and Samphire Pakoras epitomise the British food in Indian clothing that runs through the menu. Staying true to their shipping container origins, all venues opt for the ever popular industrial pared-back aesthetic which makes for a relaxed but smart dining experience. READ MORE 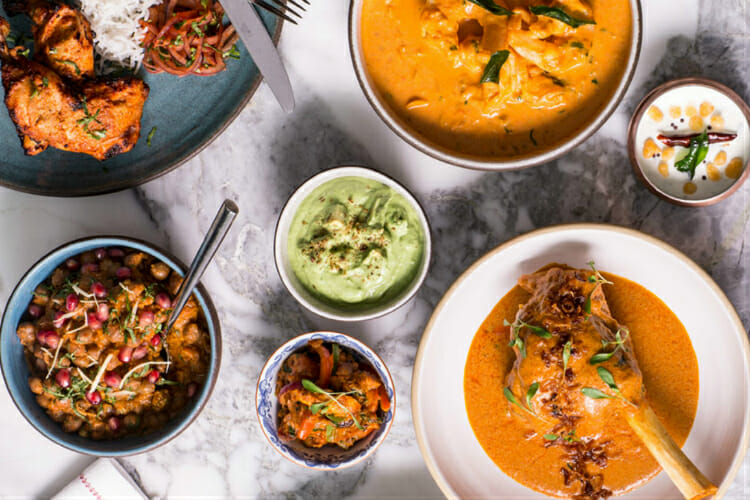 Sister restaurant to the once Michelin-starred Tamarind of Mayfair, this place is like Tamarind on dress down Friday. Housed on Wardour Street, it’s dark, industrial, and edgy – the kind of place you can unbutton your collar (useful after a spicy chicken tikka). There’s no starched tablecloths; just plenty of marble, exposed concrete, and sleek velvet upholstery. This arty Indian aesthetic influences the menu: pre-dinner you can enjoy a Bay Leaf Daiquiri, and post you’ll want to indulge in their Deconstructed Tropical Fruit Trifle. Leaving room, however, could prove a challenge. The food, whipped up by Peter Joesph (head chef at the original Tamarind) is an abundant collection of top notch nosh. The dishes read like a map of the sub-continent, with a street-food focus for starters and a round-country tour of curries for mains including; Calcutta Bhuna Gosht, Chettinad Chicken Biryani, and Old Delhi Butter Chicken.

Like discovering the best? See more of our top picks of London restaurants and bars