London theatre is having a revival.

After two years of lockdowns, losses, and casts forced into isolation, it seems like the city’s theatres are finally getting back to what they do best: bringing you spine-tingling, tear-jerking, heart-racing live entertainment from collectives of hugely talented people, in some of London’s most elegant buildings.

So we’re keeping this updated with all the best shows and plays running in London right now, from glitzy musicals and outrageous comedies to immersive theatre and hard-hitting drama, all rather conveniently presented with our top picks of restaurants and bars to make a night of it.

THE BEST MUSICALS IN LONDON

Back To The Future: The Musical | Adelphi Theatre 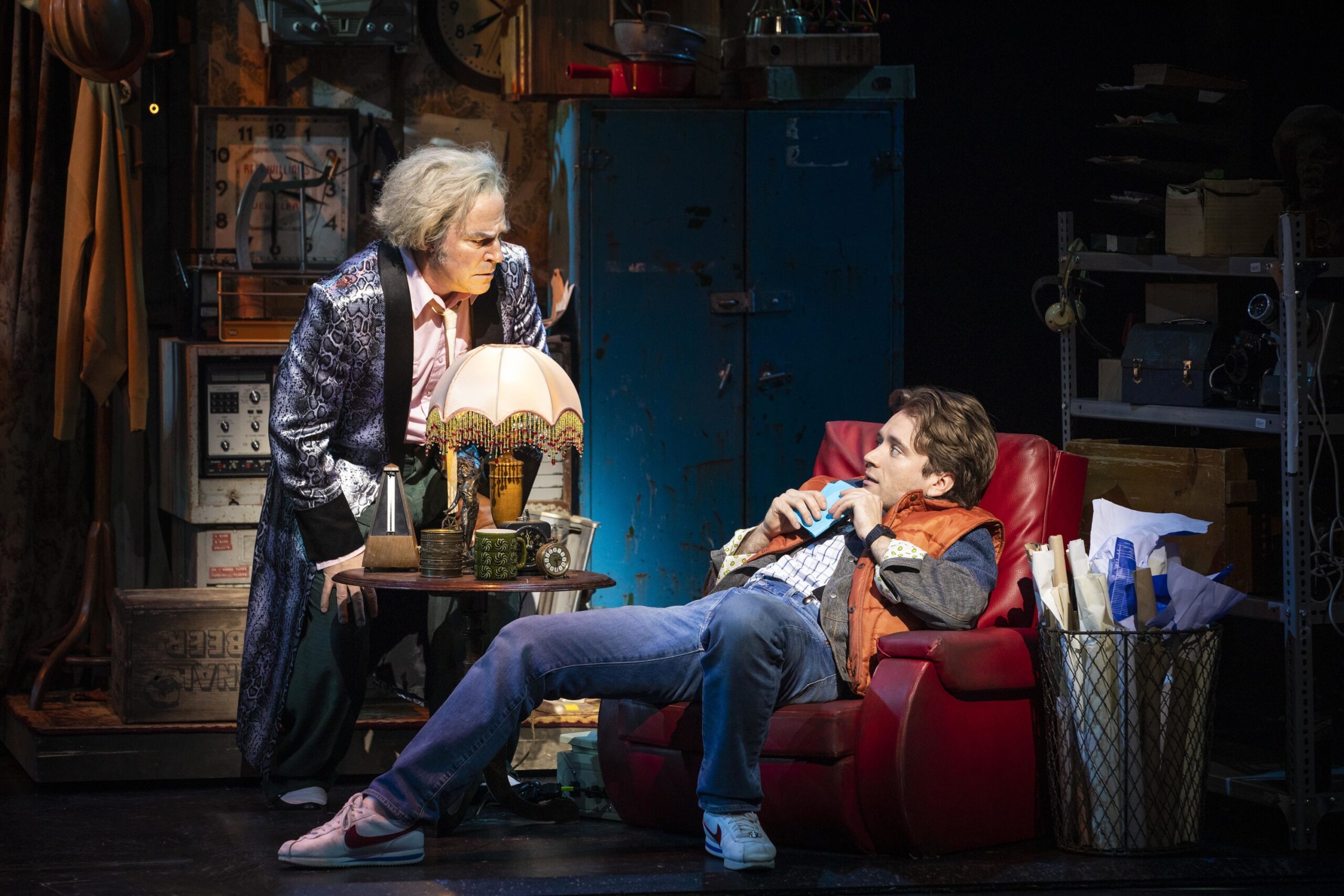 Future you visited us, and said it was imperative we tell you about this new musical. And to be fair, if you like cult movies, 80s hits and not being in your living room all year again, you’re probably going to enjoy it. READ MORE

Dinner before: Steak at 1985 prices at Flat Iron Covent Garden
Drinks after: Hand-picked wines at Lady of the Grapes
London Theatre Critics say: The Metro 5*, The Telegraph 5*, Michael J. Fox: “A truly great show.”
Details: Back To The Future: The Musical runs at the Adelphi Theatre (closest tube station Charing Cross) until 3rd July 2022. Tickets cost £19.55 – £224.50, and can be booked HERE.
– 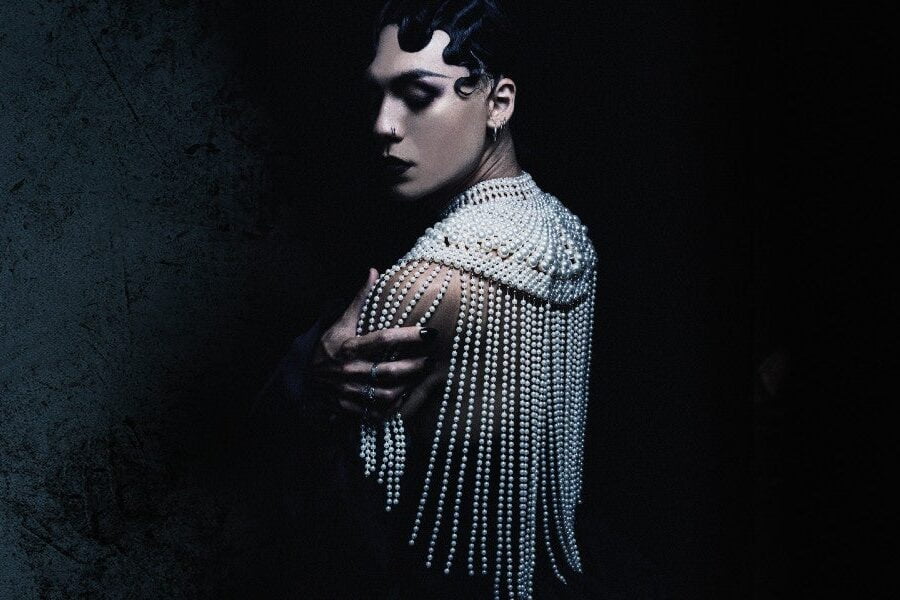 Willkommen, bienvenue, welcome to this brand new production of cabaret, directed by the sensationally talented Rebecca Frecknall. For this revival of the classic musical & film, the Playhouse Theatre has been converted into a giant version of the Kit Kat Club, where (the lucky few, at least) can sip cocktails and dine at intimate cabaret tables while the show unfolds. And what a show it is – it stars Jessie Buckley, whose rendition of the title song will chill you to the bone, and Eddie Redmayne, who brings a gnarly, childlike and physically captivating Emcee to proceedings. Plus, some of the most beautiful costume design that’s hit London stages in the past few years…

Dinner before: Go fancy at Kerridge’s Bar & Grill
Drinks after: Wine in a candlelit cave at Gordon’s Wine Bar
London Theatre Critics say: Evening Standard 5*; The Independent 5*; The Telegraph 5*
Details: Cabaret runs at the Playhouse Theatre (closest tube station Embankment) until 19th March 2022 before a new cast take over. Tickets cost £30 – £150 and are running pretty low for the whole run, but you can book HERE.
–

Come From Away | Phoenix Theatre 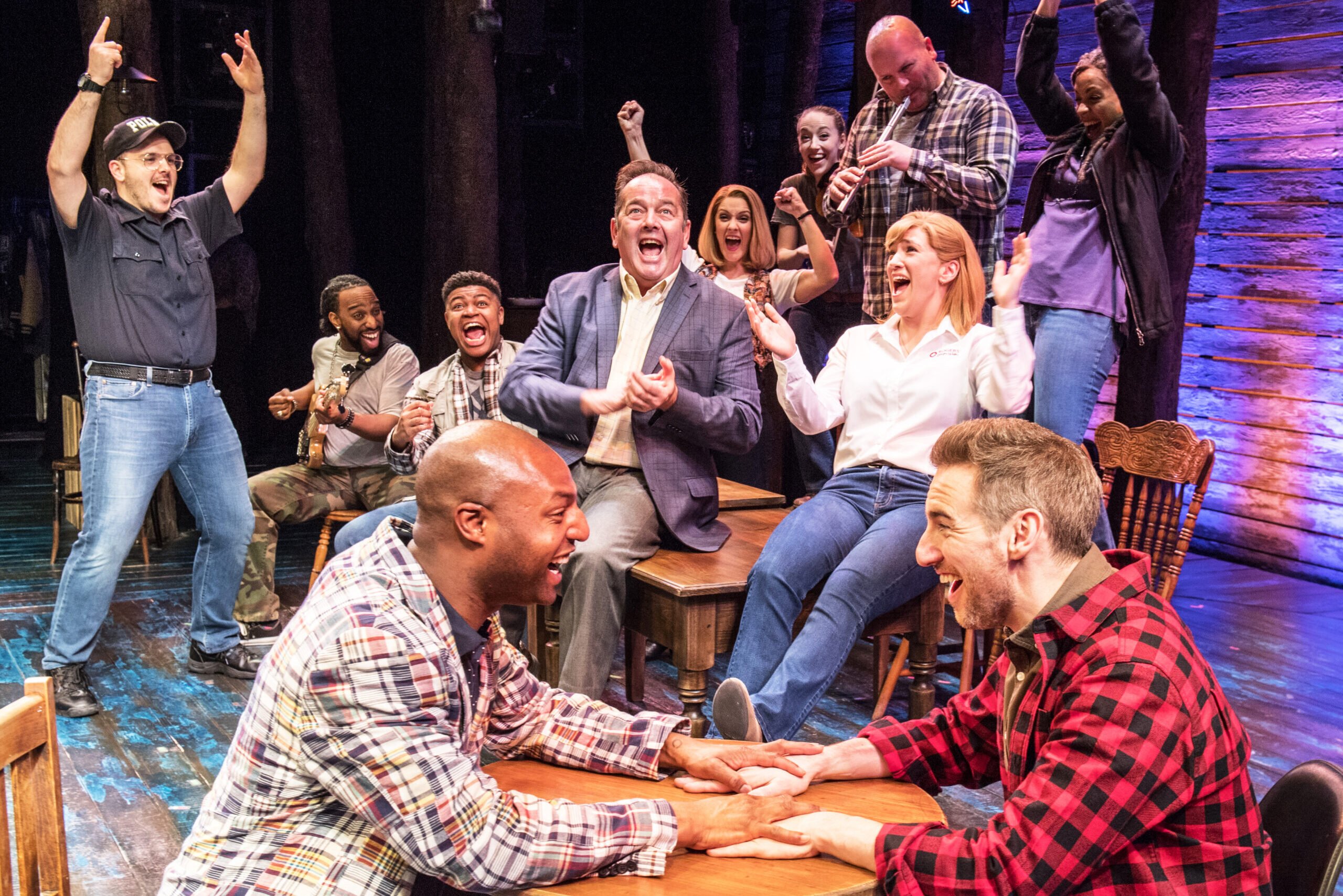 Come From Away isn’t your typical musical. There’s no dazzling lights, or flashy set. The cast are probably less dressed up than the audience. Oh, and the whole toe-tapping, feel-good, soul-lifting story… is about 9/11. Set in the Canadian town of Gander, which hosted 7,000 diverted air passengers in the wake of the attacks, it’s a rousing paean to community spirit and compassion, interlaced with a folk-rock score that’s helped to bag the show four Olivier Awards, including Best New Musical.

The hugely anticipated broadway transfer of this Tony award-winning musical has finally landed on English shores. It centres around Evan, an American high schooler with social anxiety who finds himself faking an old friendship with a student who recently committed suicide. What follows is a heartbreaking story as relationships are formed, broken, and redeemed, all punctuated with a seriously strong soundtrack. Bring tissues.

Dinner before: Colourful Peruvian at Floral by Lima
Drinks after: Find the hidden bar behind the golden handshake at the St. Martins Lane Hotel
London Theatre Critics say: The Telegraph 4*; The Times 4*; The Guardian 4*
Details: Dear Evan Hansen runs at the Noël Coward Theatre (closest tube station Leicester Square) until 7th May 2022. Tickets cost £15-177.50, and can be purchased HERE.
– 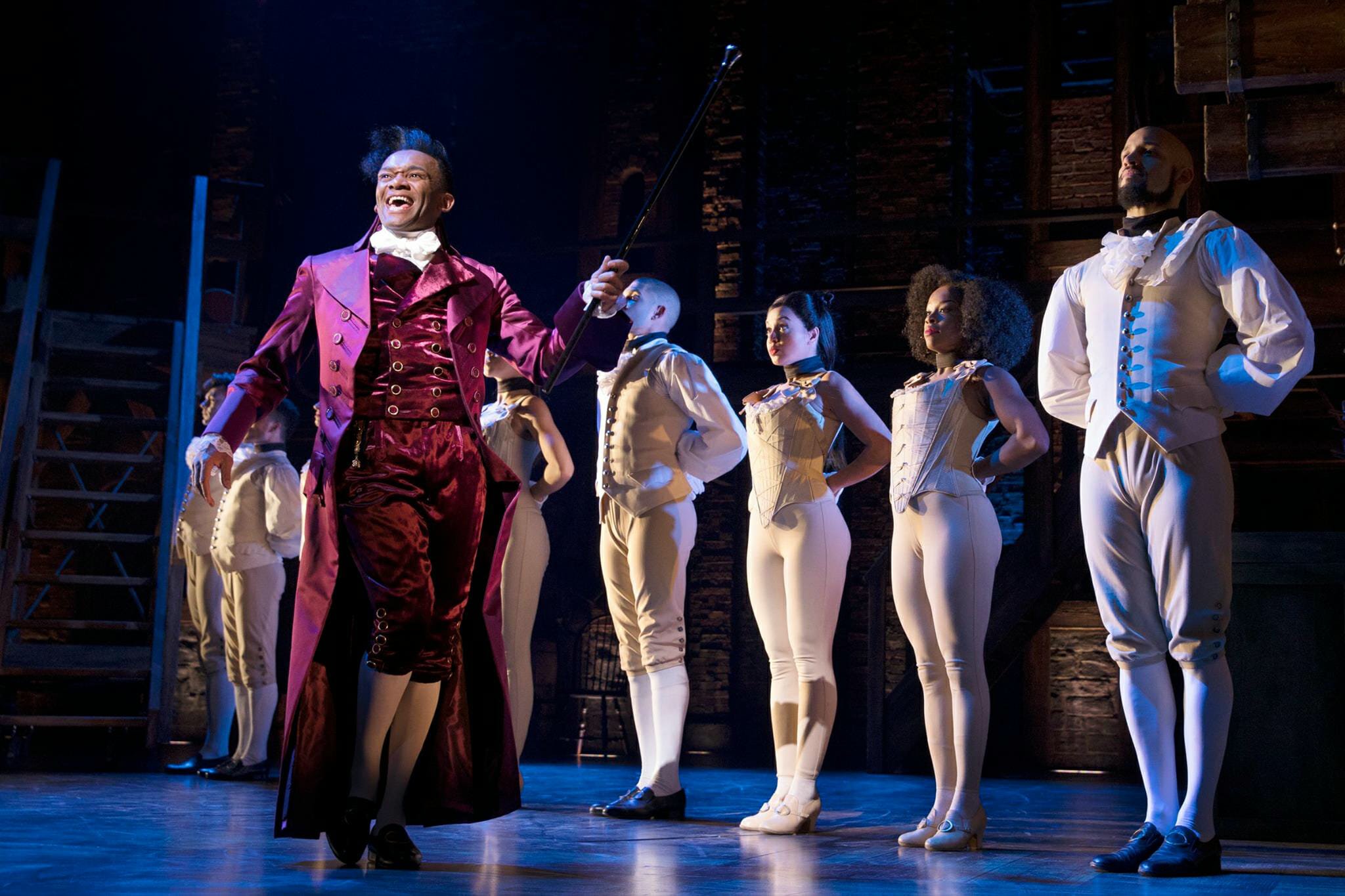 Although Hamilton might have won 11 Tony Awards for its Broadway run, the London cast are ready to Rise Up to the challenge.

Following the story of founding father Alexander Hamilton, it’s a revolutionary musical that raps its way through history, and within months of playing here, earned a record-breaking 13 Olivier nominations for its troubles…

Dinner before: Al fresco brasserie fare at Rail House Café
Drinks after: Cocktails upstairs at The Ivy Victoria
London Theatre Critics say: The Guardian 5*; The Telegraph 5*; The Independent 5*; The Stage 5*; The Evening Standard 5*
Details: Tickets are on sale for Hamilton at the Victoria Palace Theatre (closest tube station Victoria) until 3rd April 2022. They cost from £41.75-£100, and can be purchased HERE.
–

Always knowing exactly when she’s needed, Mary Poppins has flown into town. A sugar-dusted production with dazzling costumes, impressive dance sequences and a glorious soundtrack (obviously), this musical’s the pick-up we all needed.

Dinner before: French food and jazz at Café Boheme opposite
Drinks after: Slip behind the bookcase at Milroy’s
London Theatre Critics say: The Guardian 5*; The Telegraph 5*; Evening Standard 4*
Details: Mary Poppins runs at the Prince Edward Theatre (closest tube station Tottenham Court Road) until 3rd April 2022. Tickets cost £40-89.50, and can be purchased HERE.
– 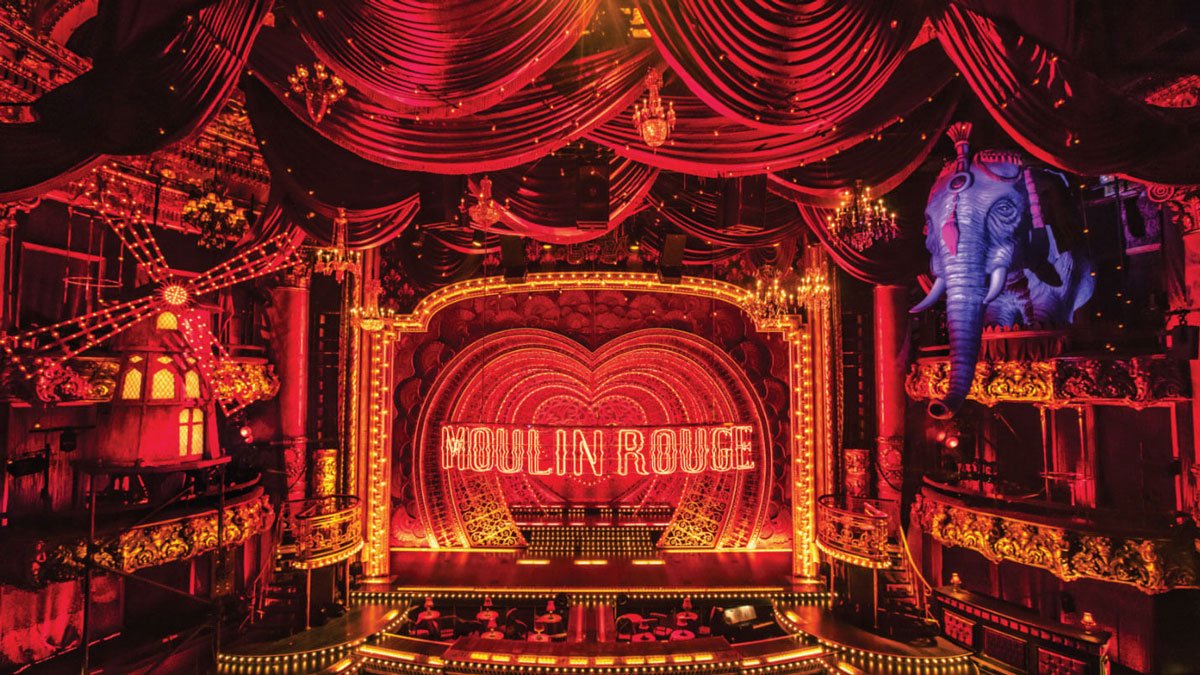 Why should you go see the new production of Moulin Rouge? Because you can can can! This dazzling show has finally transferred from Broadway to London, with an impressive 14 Tony nominations under its belt, a crack team of award-winning producers and creatives (including Baz himself), and an incredible soundtrack of 71 songs… READ MORE 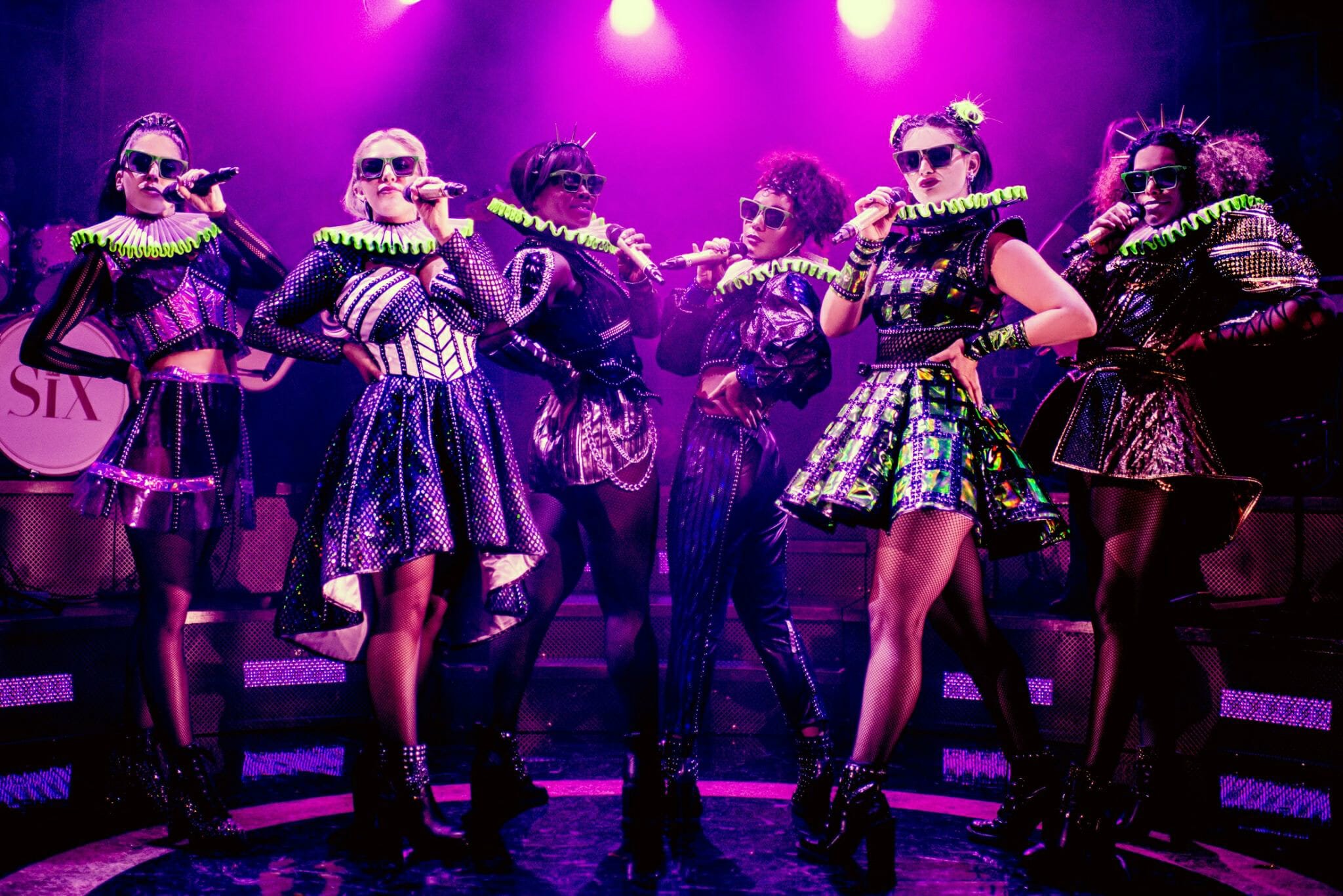 Divorced, beheaded, live in concert: it’s the story of Henry VIIIth’s six wives, performed by the queens themselves in the form of a punk girl-band. To say it’s a phenomenon would be to undersell it: it started out as an Edinburgh Fringe show, and has now scored runs in the West End, on Broadway and down in Oz. Expect neon ruffs; Greensleeves-techno mash ups and unexpectedly poignant moments interspersed with its high-energy score. Best of Enemies is a brand new play from James Graham, author of Quiz, Ink and This House. Basically, the man knows how to write politics and media. So it’s not surprising that his latest knocks it out the park, taking a look at the fierce rivalry between Gore Vidal and William F Buckley Jr as they led ABC’s commentary during the US party conferences of 1968. And if the last part of that sentence went in one eye and out the other, trust us – the electric performances by David Harewood and Charles Edwards keep the fast-flying exchange of ideas totally compelling.

Dinner before: Vietnamese street food at Banh Bao Brothers
Drinks after: Rooftop pints at Bar Elba
London Theatre Critics say: The Times 5*; The Guardian 4*; Evening Standard 4*
Details: Best of Enemies runs at the Young Vic Theatre (closest tube station Waterloo) until 22nd January 2022. Tickets cost from £10-45, and can be purchased HERE, or you can livestream the show at home for £15 on 20th-22nd January.
– 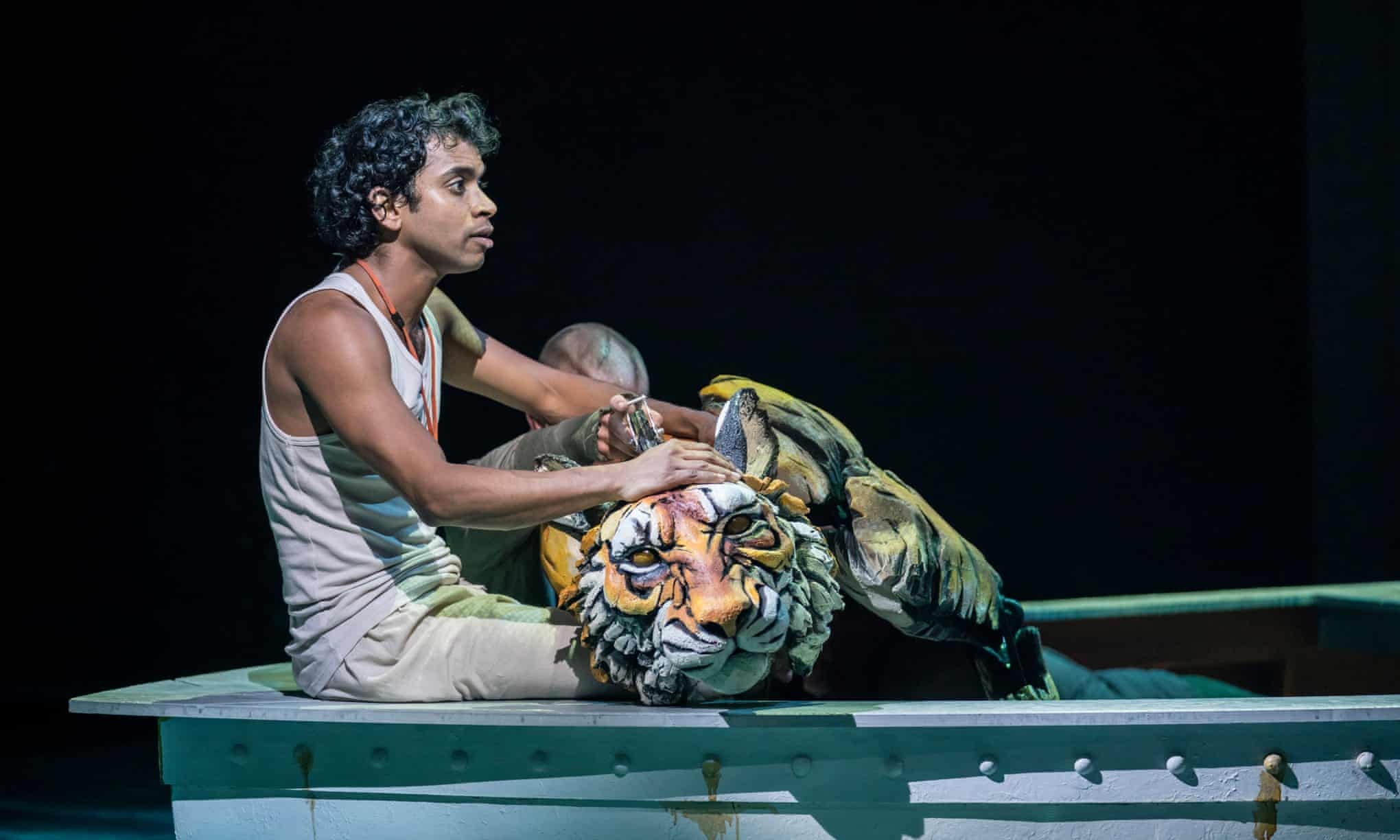 This show based on Yann Martel’s iconic novel has only just opened in London, so it doesn’t technically have any reviews here yet. But after its initial run in Sheffield, the critics hailed it as “the next War Horse” – you know, the internationally touring, multi-award-winning, critically acclaimed War Horse. Sooo, you’re probably going to want to get tickets for this.

Dinner before: Get into the sea setting at J. Sheekey
Drinks after: Head to the underground bar at Wun’s Tea Room
Theatre critics say (about the Sheffield run): The Guardian 5*, The Times 5*, The Stage 5*
Details: Life of Pi runs at Wyndham’s Theatre (closest tube station Leicester Square) until 29th May 2022. Tickets cost from £32.50-127.50, and can be booked HERE.
– 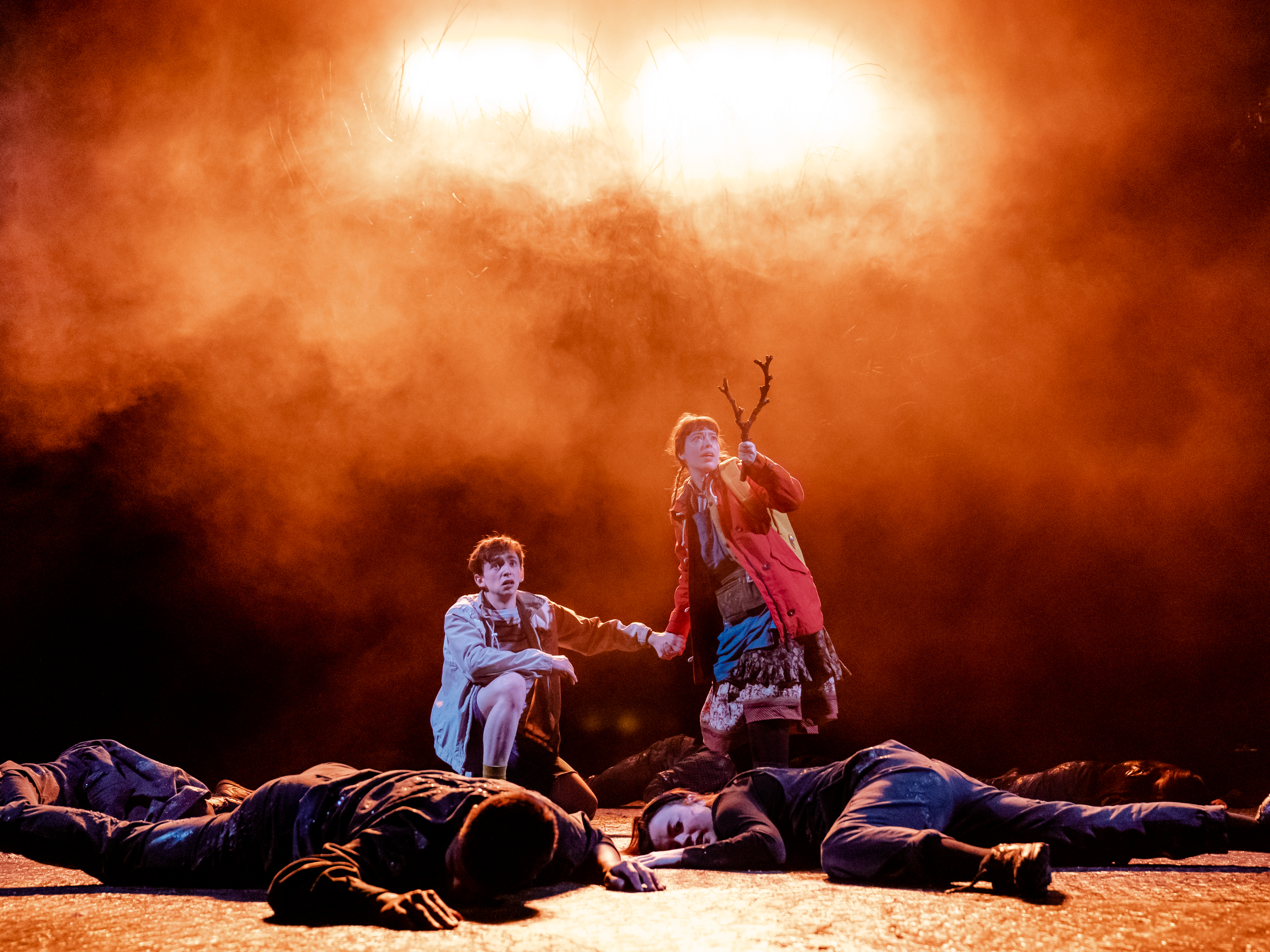 This Olivier-nominated stage adaptation of the Neil Gaiman novel was due to transfer to the West End in 2020, but when the pandemic arrived it looked like the end of the – well, you know. But now it’s finally made its way to the Duke of York’s, and it’s all the better for the wait – some amazing movement direction, lighting design and fantastic puppetry by Sam Wyer combine to create a genuinely spine-tingling show full of supernatural thrills.

Dinner before: Tapas at the counter at Barrafina
Drinks after: Gin cocktails at Mr. Fogg’s Tavern
London Theatre Critics say: The Independent 5*; The Times 4*; The Guardian 4*
Details: The Ocean at the End of the Lane runs at the Duke of York’s Theatre (closest tube station Leicester Square or Charing Cross) until 14th May 2022. Tickets cost £18-95, and can be booked HERE.
– 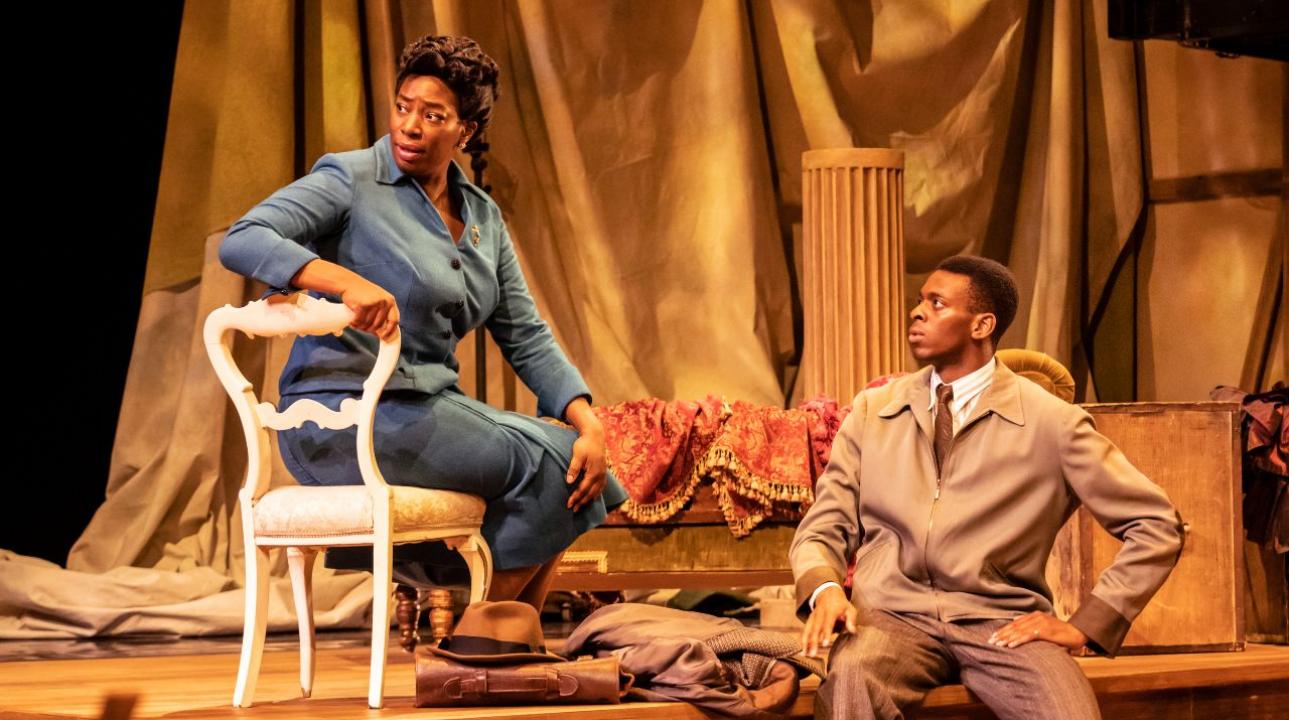 Alice Childress wrote Trouble in Mind in 1955. Set in a Broadway rehearsal room, it depicts a group of actors gearing up to stage an anti-lynching play; the Black performers consigned to reductive, stereotyped roles and subjected to microaggressions from the director veiled as flattery. Ironically, the play only got its first run on Broadway this year, and it’s expertly directed here with an agile cast flitting from comedy to chilling horror in a matter of moments. 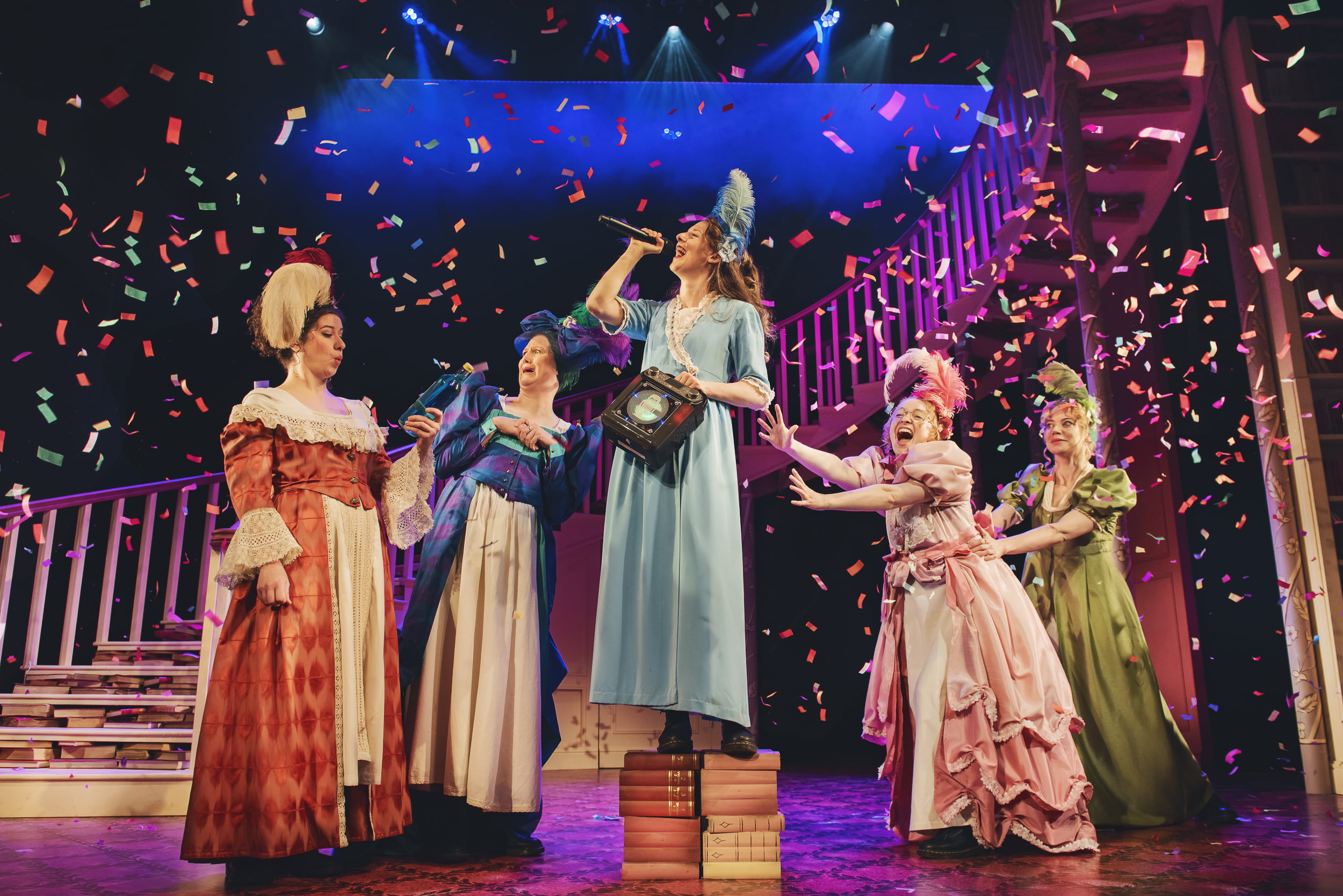 It’s Pride & Prejudice! Sort of. Because in this production Austen’s novel has been given a raucous, tongue-in-cheek makeover by five quick-changing, multi-roling, sometimes harp-playing actors, and a chair. There’s swearing, unlimited reserves of energy, and a karaoke-style soundtrack including Holding Out for a Hero and You’re So Vain.

Dinner before: A British take on Indian cooking at Kricket
Drinks after: Cocktails in the 1930s Bar Américain
London Theatre Critics say: The Telegraph 5*; The Guardian 4*; Evening Standard 4*
Details: Pride and Prejudice* (*sort of) runs at the Criterion Theatre (closest tube station Piccadilly Circus) until 17th April 2022. Tickets cost £9.50-£59.50, and can be booked HERE.
–

The Shark Is Broken | Ambassadors Theatre 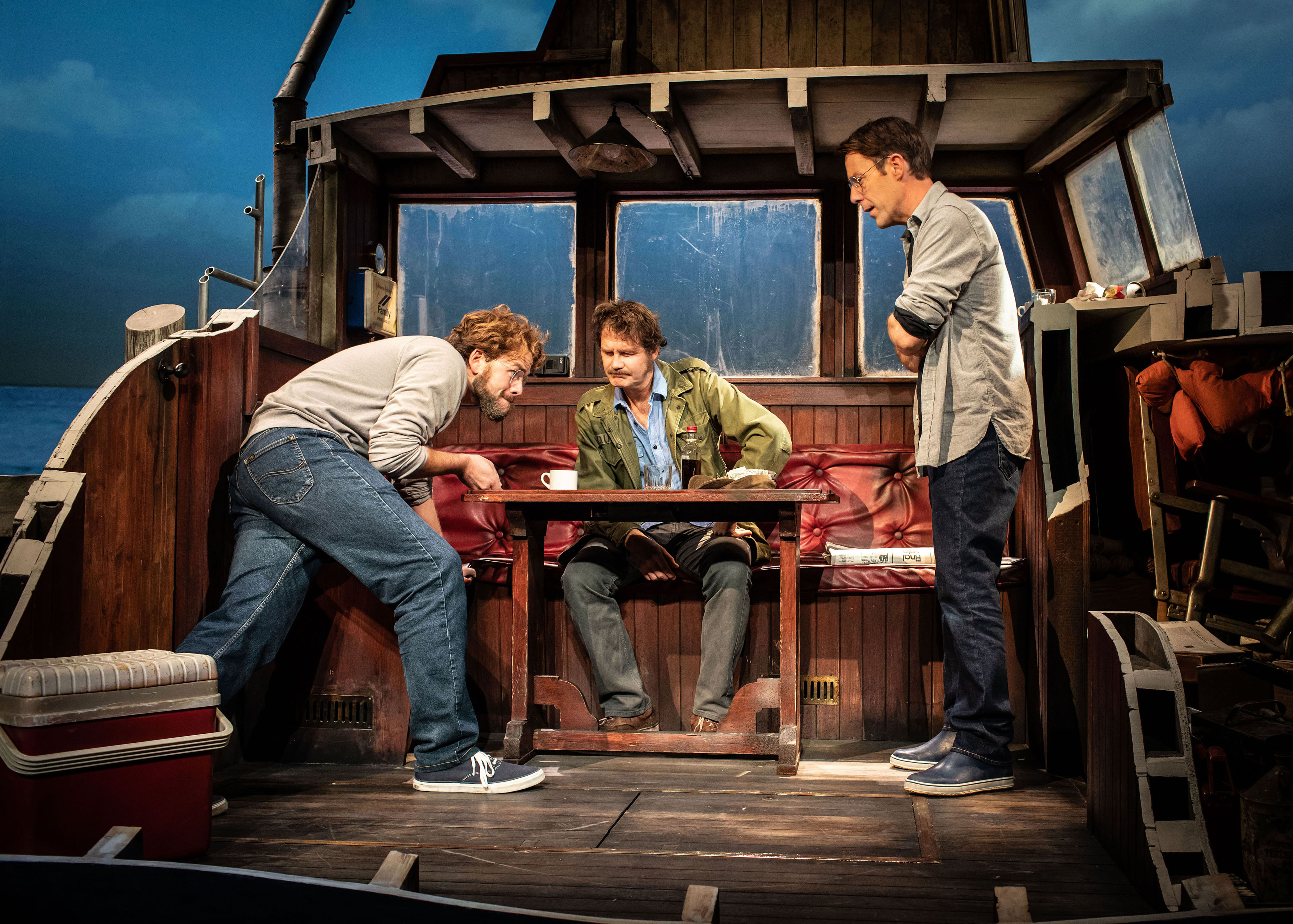 We all know how Jaws ends. Fin. But if you want to know how it was made, you’ll need to watch this very funny show about the feud between actors Roy Scheider, Robert Shaw and Richard Dreyfuss – now the stuff of Hollywood legend. As you’ll have guessed from the title, the mechanical sharks in the film constantly broke down, leading to long, tense periods of waiting on the shoot – and co-writer Ian Shaw knows, because he was there visiting his dad. This was a breakout star of the Edinburgh Fringe festival in 2019, and its West End run has now been extended by popular demand.

Dinner before: Dine with the luvvies at The Ivy
Drinks after: Great wines by the glass Casanova and Daughters
London Theatre Critics say: Evening Standard 5*; The Times 4*
Details: The Shark Is Broken is playing at the Ambassadors Theatre (closest tube station Leicester Square) until 13th February 2022. Tickets cost £20-75, and can be booked HERE. 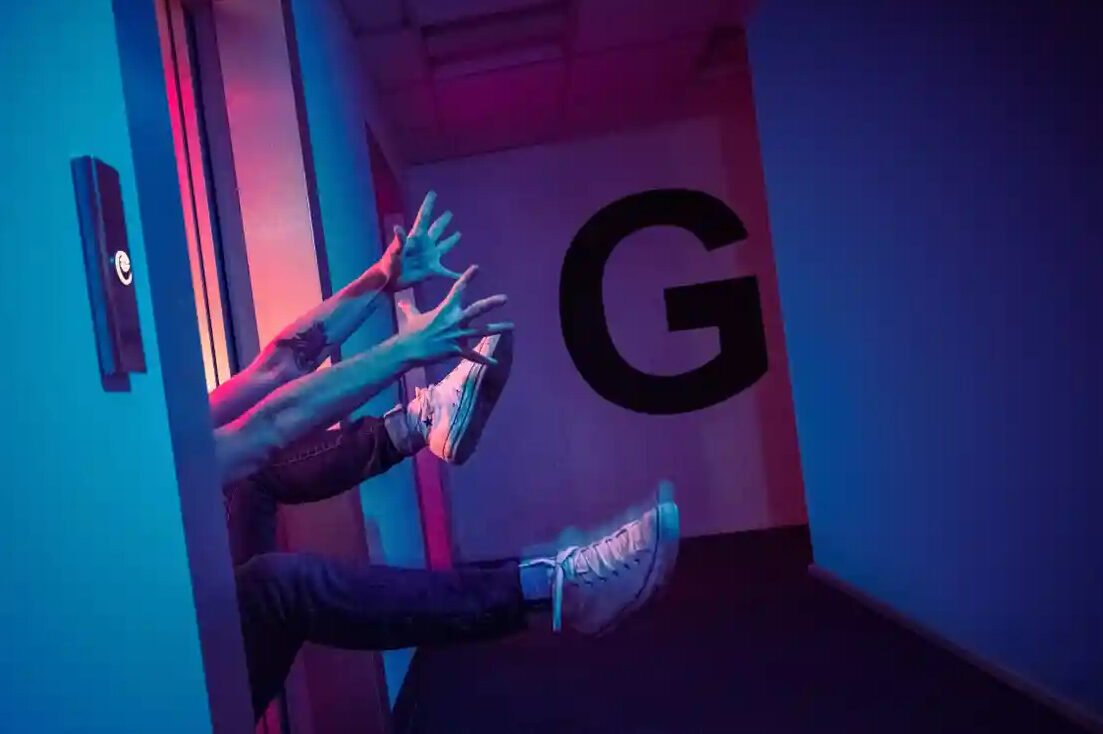 The Drop is an ‘immersive escape experience’ that comes to you from a company called Swamp Motel, and which takes place in an unassuming five storey building in Aldgate. Inside that building is a seedy criminal underworld, and your job is to navigate it, come out alive, and endure something called “The Drop” at the end of it all… READ MORE

Dinner before: Modern British dining at Townsend
Drinks after: Drinks with a view at Iris
London Theatre Critics say: The Telegraph 4*, The Stage 4*
Details: The Drop runs at a building on Aldgate High Street (closest tube station Aldgate) until 27th February 2022. Tickets cost £40-75, and can be booked HERE.


Main image: The Ocean at the End of the Lane/Manuel Harlan

Want to see great theatre for less? Find out how to get cheap theatre tickets in London